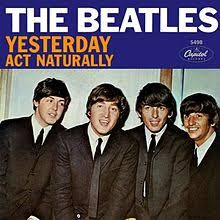 "Yesterday" (recorded June 14, released August 6, 1965) written by Paul McCartney, credited to Lennon/McCartney and sang solo as a Beatles member by McCartney.  I've blogged on this, the most covered 'pop' song of all time before but not in this particular capacity, for me it ticks all the boxes for a great ballad. This was a turning point for ballads in Rock music and for that matter in popular music period. Just because the song is now almost 55 years old and most everyone knows the song doesn't make it great, it was exceptional right from the first time it was performed. It's well documented from McCartney's own words that the melody came to him in a dream, and after months of using the comical placeholder lyrics of "Scrambled eggs/Oh my baby how I love your legs/Not as much as I love scrambled eggs" the words were finalized while on a holiday break. Paul has credited John Lennon with coming up with the title of "Yesterday" which helped him finish the song. There is so much written about the uniqueness of the song, the chord progression, lyrics and Paul's acoustic guitar playing-not to mention George Martin's brilliant idea to add the orchestra. While it was very briefly debated to release the song as it was, a solo by McCartney, this was vetoed and the the band would not allow it to be released as a single in the UK. Their American label was Capitol Records and the distance (both physical and legal) from EMI’s Parlophone label allowed them to make the decision to release the single on September 13, 1965 but in the US only. It hit #1 after four weeks and reportedly sold a million copies in five weeks, not unheard of however, even for the most popular singles at that time it was still about a year's worth of sales. And people are still listening to and talking about the song. Currently there are well over 800 documented cover versions with likely a couple thousand others so it is tough to pick just a few. The first cover was from Marianne Faithfull in 1965 (catch the irony!) The Supremes  and John Denver are two of the over 70 versions from just 1966 alone. Frank Sinatra (1969). Himesh Patel from the movie 'Yesterday'. (2018). Billie Eilish from the 2020 Oscars.

I’m sending up flares, but no one see…
The Best Place to Throw Sharp Objects
3 Terrible Reasons To Ditch Your Sobr…
$50 Million Stolen from Upbit
Is It Possible to Talk to the Dead?
"As Tears Go By" was written by Andrew Loog Oldham, Mick Jagger, Keith Richards and first recorded by Marianne Faithfull on May 24, 1964 and released on June 26. The Rolling Stones would release their version on December 4, 1965 in the US, and in February 1965 in the UK.  It is all about the arrangement of the song on the Stones version. Paul McCartney wrote "Yesterday" almost concurrently with this song but his song was released several months before the Rolling Stones recorded their version "As Tears Go By", you can't help but notice the similarities in the arrangement between the songs. I believe it's the first song the Rolling Stones (Jagger and Richards) wrote themselves, and not specifically for Faithful, contrary to popular belief as she herself has waffled on that story. Mick and Keith thought it was "a bit of tripe" and their manager (Oldham) gave it to the young 17 year old Faithfull quite possibly just to test the waters, her song however would go to a very respectable #6 in the UK only. When they recorded it with a new arrangement (and no drums by the way), it charted #1 in Canada and #6 on Billboard in 1966. Believe it or not it hit #10 on the Easy Listening chart! It features a beautiful orchestral string arrangement by Mike Leander and dare I say also à la Paul McCartney, with Keith Richards on acoustic guitar. A very soulful vocal lead from Mick Jagger. A bit of a forgotten song as it was not typical of the Stones style at the time, though they would follow with many a ballad. For me it's a brilliant song and a close second to "Yesterday" not only chronologically but in music quality.

As usual there is a thin line separating these songs as you'll see titles sometimes referred to as a both a power-ballad and maybe a hard-rock ballad for example, both of which developed more into the mid 1970's. I'm sure a few of the songs I've blogged about in the past fall into this Pop Rock Ballad category. Not to say there were not many Pop Ballads prior to this type of song but for me at least it started in 1965 with "Yesterday" and from there I've selected these songs as some of the greatest.

"Lady Willpower" by Gary Puckett and the Union Gap, written by their then producer the multi talented Jerry Fuller. This song hit #1 on Cashbox and #2 on Billboard in the UK it was #5 all during the summer of 1968.

"Nights in White Satin" by The Moody Blues" from 1967 and written by band member Justin Heyward. Released late in 1967, it was in 1968 when it reached #19 in their native UK and it didn't crack the top 100 in the US. However after they had success with their album Seventh Sojourn, the record company decided to re-release the single in Seattle in 1972. FM radio DJ's were loving the song and it it's popularity spread to the point of hitting #1 on Cashbox and #2 on Billboard charts. (Hey Sheila!)

"The First Cut Is the Deepest" was first recorded by P.P. Arnold (Patricia Ann Cole) in April of 1967. Patricia bought the song for 30 British Pounds from a young songwriter named Cat Stevens (Stephen Demetre Georgiou) while they were employed at Immediate Records which was founded by the Rolling Stones manager Andrew Loog Oldham. Her original version hit #18 on the UK Singles chart and helped launch a successful solo career for the former Tina Turner backup singer. I remember this song from Keith Hampshire as his 1973 version hit #1 here in Canada.

"The Letter" was recorded by The Box Tops and released in August of 1967. Written by Country singer Wayne Carson who also co-wrote Willie Nelson's Grammy winning song "Always on My Mind" among other great hits. The song charted top 10 around the world and #1 in the US and Canada. An amazing vocal performance from Alex Chilton that earned this song a place on Rolling Stone's "500 Songs That Shaped Rock and Roll" and the Grammy Hall of Fame. Covered over 150 times most notably by The Mindbenders (1967) and the great Joe Cocker (1970). 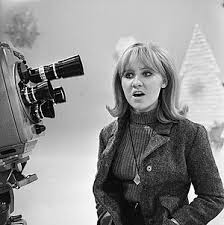 "To Sir, with Love" was performed by one of the finest vocalists of the 1960's and 70's-Lulu (Marie McDonald McLaughlin Lawrie) in the movie of the same name in 1967 with above mention group 'The Mindbenders'. The 'A' side single was written by Mark London and Don Black and released with another Mindbenders song from the movie "It's Getting Harder All the Time" in the UK and "The Boat That I Row" by Lulu in the United States. The song charted #1 in Canada and the US and at #1 on Billboard's Year End Hot 100 for 1967 and #2 overall in Canada.

"He Ain't Heavy, He's My Brother" was covered by The Hollies in 1969. It was written by Bobby Scott and Bob Russell and first recorded by Kelly Gordon in May of 1969. The Hollies version was a worldwide top ten hit oddly only reaching #1 in South Africa and later in the UK a #1 upon its re-release in 1988 after it was used in a beer commercial. As you can hear in the Hollies version it's due to the amazing vocals from Allan Clarke. By the way Elton John played piano on this record.

"A Whiter Shade of Pale" was the first single released by the English band Procol Harum in 1967. Written as were all their songs lyrics by the non-playing (band member) writer and poet Keith Reid. Also contributing to the song were the lead singer Gary Brooker and the Hammond organ playing Matthew Fisher (credited after a lawsuit in 2006). It was a world-wide smash #1 hit and one of the few singles ever to sell over 10 million copies. Ranked at #57 on Rolling Stones "The 500 Greatest Songs of All Time" and inducted into the Grammy Hall of Fame. Covered by Annie Lennox in 1995.

Maybe technically a bit too upbeat for a 'ballad', not a bad way to end so I'm sticking it in here anyway! "Daydream Believer" by The Monkees from 1967 was a #1 hit in both Canada and the US and top 10 around the world. It was written by John Stewart who was a member of the folk group The Kingston Trio. But for a twist of fate this song ended up on the 'A' side of the single release which was supposed to be "Love Is Only Sleeping" with lead sung by Michael Nesmith. Anne Murray had a hit with this song released in 1979.

Trivia. Where did 'Procol Harum' get its name? It came from a friends "fancy cat name" which was obtained from a breeder with an 'official' name of "Procol Harun". Yep!

Be safe and remember social distancing saves lives. Thoughts and prayers to those we have lost and their families.

If you like my blog, please consider filling in the follow by email link at the top right hand of the page. Remember to confirm the subscription when you get the first email. Confidentiality is assured unless you are a close friend or family member then all bets are off. While I can compile data from my blog it's not tracking in terms of anyone's identity. For past blog posts click on the menu at the top right corner. Pass it along to a friend who might enjoy it as well or post it to your timeline on FB or other social media. And many thanks as always for reading my blog!