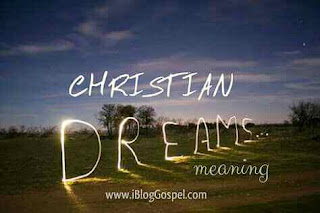 Having sexual relations in dreams is very common (among Christians and non-Christians alike). In our sex-crazed society, sexual dreams have become a norm, even to the extent some people learn to induce it themselves because they think it's fun—fun to experience what sex feels like in a whole new dimension: the spiritual.

What they don't understand is that they're the host, while whatever they have sex with in their dreams is the parasite feeding off their life force and harming them for life and eternity.

Christians should understand that there's nothing godly or funny about these sort of dreams. They in fact, should be seriously fought against and overcome and not embraced as normalcy.

Sex itself is beyond what many think it is, as it is connected to man's well-being.

Having any kind of sexual relation not approved by God (be it sex outside marriage, in dreams or with the wrong person) can not only harm the human soul involved; it can as well negatively affect their destiny and end them up in Hell.

The kingdom of darkness is very swift when it comes to leveraging man's weaknesses to their advantage. The truth is that 90% of sexual dreams people have when they sleep are induced by agents of darkness. It is a major weapon in Satan's arsenal against mankind.

Since the world has grown to love sex more than God, the enemy has used that opportunity to destroy many destinies on Earth and pull more souls into Hell.

The role of these demons is to feed off the spiritual energy of their victims and render them spiritually weak. That achieves almost the same purpose with Eating In Dreams.

Such attacks are carried out on Christians to reduce the Anointing in them and render them powerless so that they become a lesser threat to the kingdom of darkness and their works.

Because these demons create soul ties with their victims, these people may experience marital failure and bad luck until this connection is totally severed.

Our world is plagued with lust. Even as you are reading this blog post right now, there are millions of people online watching pornography.

Demons feed on lust. They perceive the aroma of lust and go off to locate where it's coming from. Once they find it, the person emitting the lust aura becomes their next target.

In the constitution of Heaven, sex is only legal in marriage. Having any form of sexual relation outside marriage will attract sex demons. They're always hanging around to see who will commit fornication next so they have the legal right to attack them.

3. The Devil Is Bent On Doing Evil

Some times, sex demons don't wait for a door to be opened for them (through sin) to attack. Because some people will never open that door for them. So they go ahead to attempt planting sinful thoughts in the mind of their target.

If those thoughts are dwelt on, they can lead to sin and to doors being open to them. That's why we must watch out thoughts.

⚫If you're not a Christian, you have to give your life to Christ as the first step towards your deliverance.

⚫Feed your mind with the Word of God on daily basis instead of unholy thoughts that don't glorify God. If you go to bed with sexual thoughts in your mind, sex dream awaits you.

⚫You must be a prayer warrior. Sex demons are very stubborn. One time deliverance from your Pastor may not be enough. They will come back if you're someone who can't pray. I believe more in self-deliverance.

1. Father I repent of every immoral thought, act or attachment in my life.

2. By the power of the Holy Ghost, I break every demonic soul tie off my life in Jesus name.

3. I destroy every Satanic marriage in my life in Jesus name.

4. You devil that causes me to have sex in my dreams I BIND you NOW in Jesus name.

5. I break every satanic sexual connection in Jesus name.

6. I declare freedom in Jesus name

Feel free to share your dreams and contributions as comments below.

Copyright © 2019 iBlogGospel | No Article on Christian Dream Meanings from our website should be copied and pasted on any blog/website, printed and sold or reproduced in any form without prior permission of this site Admin.