Death of Me begins with an intriguing central concept: a cellphone video of a crime committed by husband against wife neither party remembers. But soon falls into supernatural shenanigans that send it from a potentially serious affair to a 3 am Sci-Fi Channel rendezvous.

This film impressions review contains spoilers for Death of Me.

Death of MeDeath of Me loses sight of what should be the focal point of the film and spirals into the supernatural.

Health protecting island medallions, superstitions about a hurricane hitting the island unless a pregnant woman is sacrificed to the Gods… The island itself preserving the health of side character Samantha [Alex Essoe] who was previously on death’s door before arriving.

Thus, the film becomes disjointed like three different movies at once. You’ve got: Christine/Neil’s murder video, islanders drugging foreigners and stealing their goods (good concept for a separate film), and the island’s segue into myth. Which ends up taking over the bulk of the film. Eventually, the plot line just seems jumbled.

Particularly, when Christine & Neil confront the bartender who drugged them… And find villagers staring them down with a big grin on their face. It looked like some outtake from Resident Evil 4’s ‘Las Plagas’ afflicted residents. Later on, an intimidating looking chap gives a bear hug to Christine and says, “Thank you”, with a massive smile of his own… Vacuuming the scene from real immersion. It reminds the audience they’re watching a film rather than engage them to live in that world for the film’s run time. 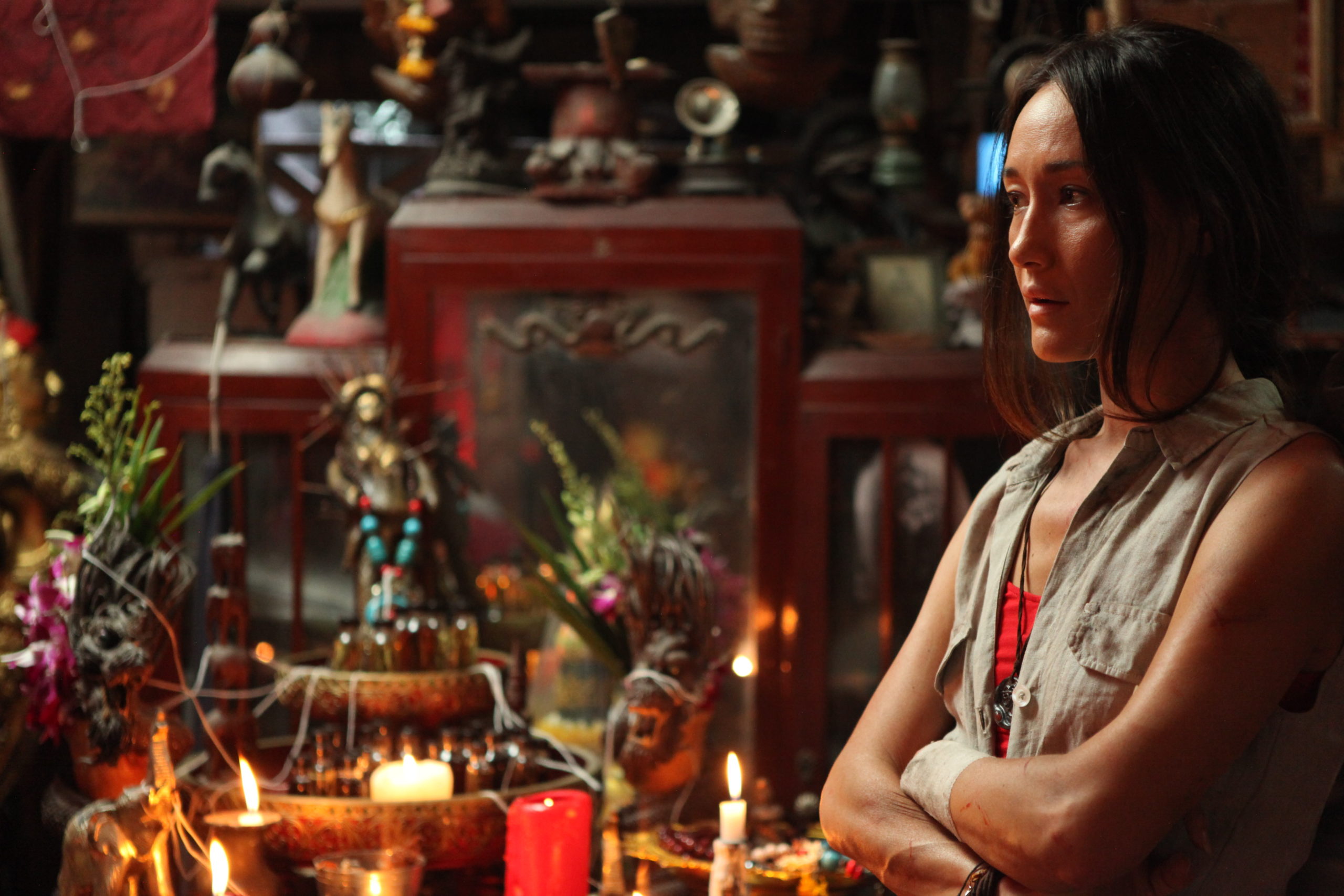 Maggie Q as Christine in the horror / thriller, “DEATH OF ME,” a Saban Films release. Photo Courtesy of Saban Films.

After enough scenes like this, you realize you’re watching more of a late night snack 3 am horror flick. Not a classic like the Saw franchise. Saw was complex, pushing the boundaries of morality, and the traps were ingenious. Most of all it keeps the suspense and tension throughout, which Death of Me loses gradually. The reason Saw is being named specifically is because Death of Me Director Darren Lynn Bousman also directed it.

Details are the deciding factor

It’s all in the details, Death of Me’s soundtrack gets pretty grating. The constant tribal loop throughout the film is just not that enjoyable to listen to honestly. The film could have also done without explicitly showing Neil ripping his own guts out or Christine’s eyelid being sewn. Less can be more.

Alfred Hitchcock didn’t need to show gratuitous gore to get your attention in Psycho. There’s a lot that can happen in the mind through great sound work and mild, implied visual presentation. You don’t really need to throw it all out there and send the audience to witness a surgery at the ER. (L-R) Maggie Q as Christine and Luke Hemsworth as Neil in the horror / thriller, “DEATH OF ME,” a Saban Films release. Photo Courtesy of Saban Films.

Luke Hemsworth is at his best when he’s chasing down a local who stole his phone while live streaming. Then gives the thief a well deserved punch, while the resident is deleting Neil’s video. There was a lot to work with there but Hemsworth isn’t used in this fashion again, which is a shame.

Hemsworth plays a travel blogger in Death of Me and there was a lot more potential to be had capturing the two naive tourists being taken advantage of by locals. It’s something regular people can relate to, until superstitions about sacrificing pregnant women to the Gods to stop storms come into play. For 200 years, the island didn’t see a storm thanks to the practice apparently.

Maggie Q is at her best early in the film when runs away from her husband to the bathroom after seeing the video of his actions. Alex Essoe, who plays Samantha, and takes over the couple’s Airbnb confronts Neil. Why is Neil’s wife hiding from him? Samantha wants to hear from Christine that “everything’s okay.” It’s a tense moment. (L-R) Alex Essoe as Samantha and Maggie Q as Christine in the horror / thriller, “DEATH OF ME,” a Saban Films release. Photo Courtesy of Saban Films.

Later Samantha reveals to Christine that she needs to be sacrificed to save the island’s people. That it’s a great honor. See the contrast? Sure, you can argue for island madness but it’s likely immersion will go down for most viewers. Christine proceeds to shoot Samantha while she’s driving her in a major surprise… But then leaves her daughter in the back of the car wreck. This doesn’t shine a light on Christine as much of a hero character. Maggie Q as Christine in the horror / thriller, “DEATH OF ME,” a Saban Films release. Photo Courtesy of Saban Films.

At one point, Christine refuses to help a local child by giving her health medallion without something in return either. Realistic? Maybe. But if you’re going to go Hollywood-esque most of the movie, Christine isn’t endearing herself to the audience. Thus, no true personal connection is ever formed to the film’s protagonists. You watch to see what happens but with no real attachment. The ending similarly makes Christine look selfish for her own escape.

If you’re a horror film aficionado looking for something new, Death of Me is solid. Just don’t expect anything awe-inspiring.

How to watch Death of Me

Death of Me is out now digitally and in theaters. You can rent or purchase Death of Me over at Amazon.

Be sure to read more Film Reviews at The Natural Aristocrat® in the Film Articles section!