From its swanky, dapper, jazzed up soundtrack to its romantic pairing of a disillusioned, going through the motions, sunglasses indoors book writer and hypnotizing, free spirit dancer living on the streets… Tezuka’s Barbara is a post-modern delight most of the way.

Thin line between genius & crumpled paper in a waste bin :

Every writer needs a muse, an inspiration, the spark from which their pen takes a life of its own. The syllables dancing on paper as their virtuoso conducts them from jumbled Scrabble out of a box to a finely tuned Symphony. Without a muse, the writer succumbs to repetition of the formula that worked before and clings desperately to attention seeking methods. Tezuka’s Barbara lead protagonist Yosuke Mikura [Gorô Inagaki] falls into such a trap, insecure about his work from a panoply of yes-men & women cheering a chorus of his emptiness.

The Book Depository – Where the Crawd…
Column: Dear Rick Caruso: Running the…
Karen Wiesner: I Have Dreamed a Littl…
Hiking the Cinque Terre: All you Need…
Istanbul: a virtual tour through book…

A pastiche of fill-the-wallet sensibilities. What we call ‘clickbait’ in internet terms, diving into the erotica genre for readership. Words that failed to make an impression on their own creator. He wonders if others feel what he feels without caring enough to tell him. Just as Mikura imagines early in the film of a flirtatious woman snickering, while telling him, ‘I love your books, they’re mindless reading! I forgot them right after I’m finished.’

Tezuka’s Barbara looks introspectively at the life of a successful writer that appears to have it all on a superficial level: a luxurious apartment, a beautiful girlfriend with a powerful father in politics who likes him, fans lining up to sing his praises everywhere he goes. Yet, on the inside he is hollow and empty, languishing in limbo from his own stagnant treadmill of progress. The treadmill might as well be a clothes hanger with a jacket tossed on top of it, brimming with dust. It’s only when Mikura meets the beautiful, nonconformist, bohemian street drunk Barbara [Fumi Nikaidô] where his fortunes begin to turn. On paper Barbara has nothing and Mikura has everything, he meets her lying on the street, drenched in alcohol fueled sweat. Mikura brings Barbara to his apartment and she’s in euphoria over his riches, jumping on his bed, calling it heaven.

In contrast, Mikura wants Barbara only to shower and agitated at her perceived brutish ways, calling her clothes too filthy to be on his furniture… Barbara soon sneaks a peek at an erotica piece, Mikura had been writing, and lays into him as he desperately asks her to give it back. The humiliated writer demands Barbara leave his apartment, his ego taking a bruising as she laughs that his work is going ‘straight to the used book store’.

Despite his initial anger at Barbara, this sets Mikura on a journey of soul-searching in both serious and often humorous ways. Mikura accepts Barbara’s criticism and throws out the humbled page into the waste bin of eternity.

Ichiko Hashimoto’s music in this film is phenomenal, a perfect fit for the faux-celebrity, always wearing sunglasses Yosuke Mikura combined with the fashionable Barbara & the film’s surroundings. Tezuka’s Barbara sets are a flashy combination of opulent luxury and garage band era grunge. Affluence brewed with junkyard dystopia. It’s an exceptionally visually appealing film. The dive bar scene where Barbara takes center spotlight to dance is a particular highlight, everything from the bar’s blue lights to Barbara’s colorful blonde locks shimmers in a wave of spellbinding cool. Fumi Nikaidô who portrays Barbara immediately captures your attention from the opening scene in Mikura’s apartment, her angry at being-kicked-out heckling quite memorable. Meanwhile, there’s unspoken subtleties to Gorô Inagaki’s portrayals of Yosuke Mikura that make the character work… Like basically ignoring his future father-in-law’s request for a sit-down talk at a wedding.

Both Fumi Nikaidô’s Barbara and Gorô Inagaki’s Yosuke Mikura have an instant, universal appeal to them from both economic sides. Spontaneous living without a cent to her name, to his decaying life of fame & luxury. Barbara having Mikura sign a secret pact in order to get married to her is one of the film’s finer, fascinating moments. Earlier, Mikura is warned by a signer in a bar (who seems to have had a relationship with Barbara) and pleads with Barbara to come back, that she’ll ruin his life too. Barbara’s mom sees Mikura as a not-so-talented scumbag like all the rest but accepts her daughter’s wishes to marry him… However, she warns Mikura that he cannot reveal the ceremony or what he has signed to anyone, or he will suffer the consequences.

Mikura later finds himself in an occult like marriage ceremony where everyone is stripped naked. Really, the whole secret society scene and contract makes you wonder how often such a thing occurs. The ceremony is broken up by an investigator/police hired by his jealous fiancee and Mikura is blamed, as the secret society believes he spoke.

Mikura is reduced to a broken shell of himself, nothing without his life’s muse. Leaving work stagnant and undone, barely eating. He finally spots Barbara dancing in the streets one day wearing a wig, Mikura begs her to come back just like the singer earlier… But she denies being Barbara while other homeless people pull Mikura away. Undeterred, he keeps yelling ‘Barbara’ over and over again, practically chasing her. It feels almost like Mikura is on the brink of total madness as he desperately doesn’t want to give up on the idea of Barbara being out there. It convincingly causes the viewer to second guess Mikura as a reliable protagonist. However, finally after the film builds suspense, she relents. She is indeed Barbara! They decide to run away together and leave their old lives behind. Romeo and Juliet-esque.

Up to Viewer’s Judgement

At first, Tezuka’s Barbara explores the cult-like celebrity of Yosuke Mikura, women smiling from ear to ear, surrounding him at a wedding. It’s only natural viewers would then believe a fashion store saleswoman all but asking him to come ‘to the back’ with her is legit and not a figment of Mikura’s imagination… But the audience soon learns Mikura is making out with a store mannequin in the dressing room when Barbara saves him by chopping its head off. The whole moment feels almost like a homage to Austin Powers segue skits.

Later on Mikura decides to go for a walk and during an intensely, passionate make out with a woman is licked on the face several times before bitten. Barbara appears again to save Mikura from what is actually a dog. Yes, you read it right, Mikura accidentally makes out with a dog during a temporary loss of sanity. The surreal humor in Tezuka’s Barbara is entertaining, laugh out loud, and certainly gives it a defined personality.

However, it does also somewhat make light of a very serious topic of artistic isolation in success. Anime/Manga fans will feel right at home with the punchy, fun comedy in the middle of a drama. After all, a good portion of anime has humor mixed in with even the most serious of shows… But it might distract a non-Anime fan, casual film watcher from giving their full investment emotionally.

What stops Tezuka’s Barbara from reaching greater heights is a polarizing cabin scene that quite frankly leaves the film’s keen sense of style and dips into the horror genre. And not just getting its feet wet in the pool but full spring board, cannon jump into the depths of unspoken human insanity.

After Barbara passes from accidentally hitting her head on a rock and not seeking medical attention (to avoid them being caught by her occult mother), Mikura has an understandable, sad breakdown at first. He cries out for Barbara to wake up over and over again, that she can’t be dead. Though her eyes remain open, life has left her body. The truth and helplessness of it all rains over Mikura, a downpour without an umbrella. Ever again. Powerful eloquent end fitting for a spiraling writer…

So where does the polarization begin you ask? When Mikura undresses the lifeless Barbara, in what seems like the days following, and practices necrophilia. Then in what appears to be an imagined spot that didn’t actually happen, opens her up Hannibal Lecter style to ‘lightly’ taste if you get the drift. While the intention is to explore the complete range of human insanity, it just feels out of place. Particularly, when juxtaposed to the style of the rest of the film, despite some other ‘occult’ features earlier.

As if they pulled the rug from under the audience and sent them into a savage horror rather than the decadent writer’s introspection they watched for most of the movie. There’s also a strange scene right before the cabin scene in which Mikura describes how he could die right there after the pair had ran off and Barbara begins choking him ‘lightly’. Barbara falls off and hits her head as Mikura suddenly wakes up, this moment is essentially never mentioned again. Choking someone is a pretty serious deal but Mikura is only concerned for Barbara’s welfare, despite almost being killed in his sleep.

The film could have done without the second half of its cabin scene for a larger audience reach. It would have stayed focused on its message without a clashing sense of grotesqueness. Instead, the cabin’s darker moments are a mélange of disharmonious horror ingredients peppered into your rum-filled Strawberry Sundae. 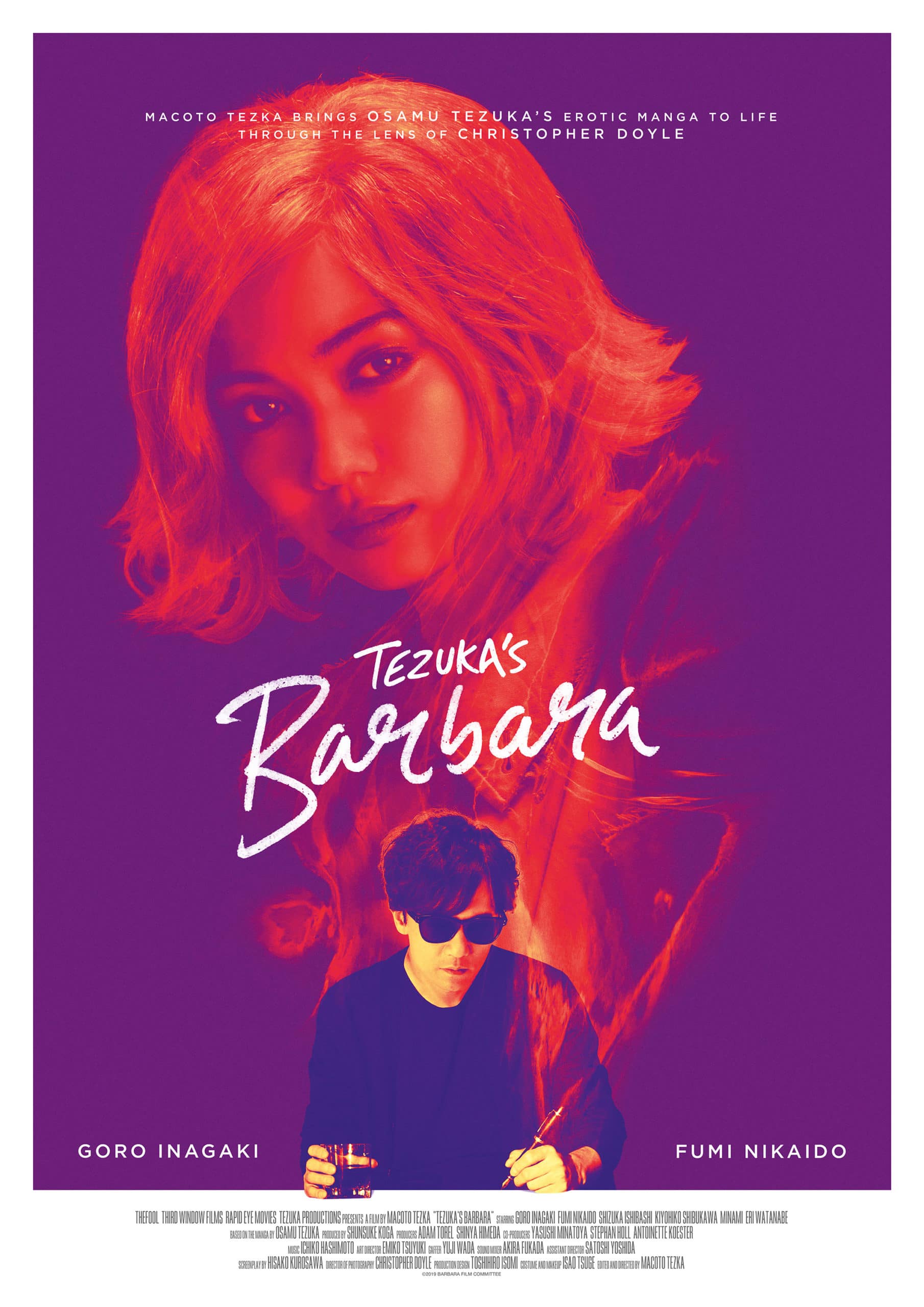 The film was directed by Macoto Tezuka and adapted for a screenplay by Hisako Kurosawa based on the original manga by Osamu Tezuka.

Check out more of The Natural Aristocrat®’s film coverage in the Film Articles section!

This post first appeared on The Natural Aristocrat, please read the originial post: here
People also like
The Book Depository – Where the Crawdads Sing
Column: Dear Rick Caruso: Running the Grove isn’t as easy as running the city
Karen Wiesner: I Have Dreamed a Little Dream (Authors and Dream Inspiration), Part 2
Hiking the Cinque Terre: All you Need to Know
Istanbul: a virtual tour through books, film, food and music
It’s Me – Chapter 23
Fantasia 2020: Kakegurui is a Flashy Joyride, Cult Classic (Review)
Real Women Share Their Masturbation Techniques
Best List of End of School Year Picture Books
Barbara Ann Bernard: A Successful Entrepreneur in a Competitive Industry
Home Interior Decorating With Persian and Oriental Antique Rugs
Something for the Weekend #3