Snowpiercer’s Jennifer Connelly aka Melanie Cavill let her flowing locks cascade down for the first time on “Access Is Power”. An episode spotlighting human depravity, regressive economic bartering, a rigid class system, and gladiatorial delights as distraction for the train’s semi-civilized, post-modern serfs.

Snowpiercer’s autocrat out in the open. Whether there ever was a real Mr. Wilford or not aboard Snowpiercer’s TV series alternate reality (and judging by a conversation between Layton & Roche tonight, there was), he lives only through Melanie Cavill now.

Cavill plays surrogate to an almost mythical, Zeus-like Mr. Wilford, introducing his elegant, refined pre-recorded messages as present day…. While letting her hair fall in relaxation over the charade, plunging the distance gravity will take it. Her Victorian updo as much of a mask and facade as the estate’s supposed noble lord. All part of the delicate balance of Snowpiercer’s ecosystem.

Mr. Wilford’s disguise allows her to personally asses the state of her dominion without revealing a visible royal crown. Thus, the train’s internalized caste system: elites, middle-class, lower-class, and the underclass of the tail are none the wiser to their true ruler.

Roman Coliseum as distraction from a species’ extinction The elite investing family responsible for bringing Mr. Wilford’s vision to life made Ruth Wardell fully aware of their displeasure on tonight’s Snowpiercer. Unlike the ‘paupers’ that don’t look past a hit of Kronole, or those fully submerged in hedonistic delights aboard the train, Lilah Folger [Kerry O’Malley] knows an extinction event has occurred on Snowpiercer. While she couldn’t place the exact nature or species type, Mrs. Folger made it clear she knew Mr. Wilford’s Fight Night was a distraction. A modern Roman Coliseum to placate the masses while Rome itself burns, one train carriage at a time.

Fight Night saw Lilah Folger’s daughter LJ [Annalise Basso] not just take in the sights but relish complete societal breakdown. Anarchy broke out post-fight, as the elite watched from above in total safety, laughing in serene amusement. LJ even took the time to wave to Layton, seeing the train detective as just another pawn from the tail to be utilized and disposed. Sent back to the tail for all of time. In fact, Lilah made for than a few comments to Melina Cavill to simply get rid of the tail train carriage altogether. And not in jest. Rather, more as an insignificant burden making their caviar arrive late to the table each day.

Cavill shed her Pan-Am style blue uniform for a luxurious, chic sequined evening dress to commemorate Fight Night. Blending in with the elites that own the first class.

It turns out Dr. Henry Klimpt [Happy Anderson] is responsible for the street drug known as ‘Kronole’, though semi-indirectly. He’d been skimming the very chemicals used to suspend ‘unruly’ train riders in preparation for their stay in the drawers. Thus, a black market sprung along the third class in what would become Kronole. Essentially, those suspended in animation in the drawers become Kronole addicts as exemplified by accused train murderer Nikki Genêt [Madeleine Arthur]. 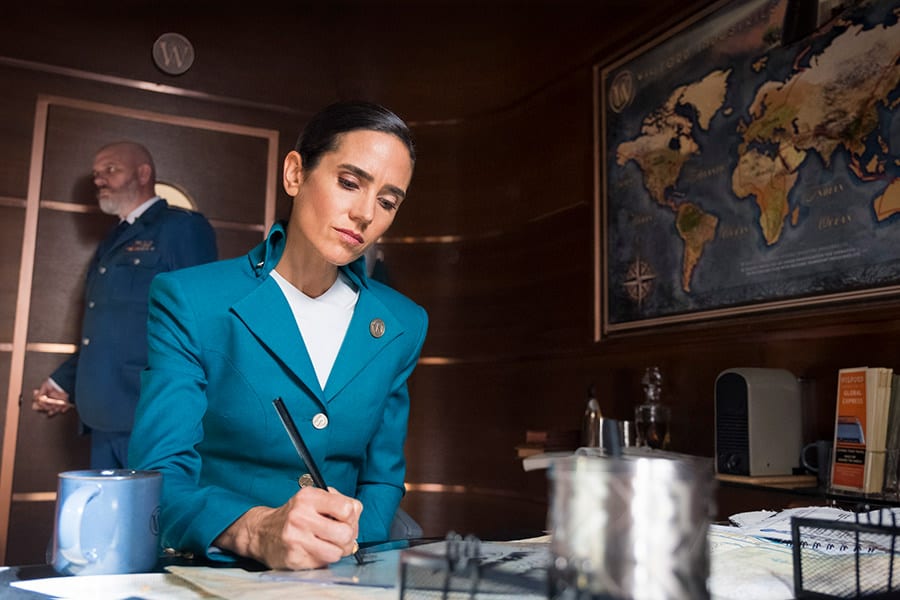 Beneath the veneer exterior of the first class’ polished clientele lies decaying foundations built on the souls of the less fortunate. John Osweiller [Sam Otto] used his position to secretly trade Kronole, which can be used medicinally, to the tailies in exchange for sexual favors. One tailie was seen making such a trade last episode, his eyes looking vacant after the act…

The theme of tonight’s Snowpiercer showcased an economic system without rules or regulations, where every part of a human being is commoditized and sold to the highest bidder in exchange for one thing… Access. The thinnest opportunity for upward mobility available only by bartering anything and everything possible. A pre-determined free market rigged by winners. Those less fortunate destined to chase after the elite’s promised table scraps.

Be sure to read Better Call Saul’s Mark Margolis in big Snowpiercer Premiere scene, watch The Natural Aristocrat’s NYCC interview with Jennifer Connelly, and discover how to watch Snowpiercer online each Sunday.

The post Snowpiercer: Jennifer Connelly lets hair down for first time as Melanie Cavill appeared first on The Natural Aristocrat.