All Ben Gardner ever wanted is someone to join him rather than judge his Purging tendencies, Esme Carmona is hunted for the NFFA’s lucrative bounty on her head, and Tommy Ortiz’ freedom brigade arrives… But not without mishap.

Tonight’s The Purge began with a captivating intro of a young Ben played by Carson Minniear watching an NFFA targeted children’s show, titled Ms. Lorelei’s Corner. Viewers were unaware it was Ben watching the series at first… It simply appeared to be a youngster mesmerized by the female host Ms. Lorelei [Mary K. DeVault], who was promoting The Purge to impressionable eyes on-screen. “The Purge allows grownups to deal with their bad feelings to do whatever they want!”

A blonde girl named Zoe asked the host “Can they kill people?” which brought a beaming, smiling Ms. Lorelei to say “Yeesssssss!” The youngster watching the series on TV would soon start bashing one toy with the other, savagely… Before his mother would walk in and say “Ben, it’s time for lunch honey! What are you watching?” Young Ben would then be juxtaposed/transform to current Ben before The Purge’s memorable theme song/intro played.

Thus, it was revealed that Ben always had violent tendencies inside of him, even back in his youth. The Purge allowed those feelings to surface, when they might have remained dormant otherwise. Quite a fascinating chicken or egg scenario when it comes down if people are born to Purge or become Purgers.

Ben forces Turner to make a choice, Purge or be Purged

In a stunner of a scene, Ben forced Turner to Purge his first victim tonight by taping what appeared to be a machete to Turner’s hands and pushing down on his arms to finish it. Ben had promised to personally Purge Turner if he refused to take out their frat house buddy who was strapped to the dinning table. Turner cried as their friend died while Ben Gardner looked to be going through some kind of orgasmic-like trance.

Ben was thrilled, proud of Turner for ‘popping his Purge cherry’ and wanted him to join on his hunt. Turner hesitantly played along, asking for a mask. Ben grinned from ear to ear as he found a dark mask before realizing Turner had deceived him and ran off. Gardner would chase Turner before a confrontation with a gang all donning replicas of his own God Mask.

He attempted to appeal to the gang, saying he was one of them, showing the mask but to no avail. Ben managed to take out a would-be Purger behind him, much to a sigh of relief honestly to fans of the show. As Ben Gardner [Joel Allen] has been a standout character all season long, you just don’t want his story to end.

Just like deceased former pal Andy Tran and girlfriend Kelen Stewart, Ben desperately longs to be accepted rather than shunned for his recreational Purging. But he is rejected over and over again. Whether it be Turner [Matt Shively] or the group wearing his mask.

Clint would arrive with the neighborhood ‘watch’ to personally Purge Marcus Moore by his own hand. A neighborhood that would soon turn on him when they realized they might suffer losses themselves for Clint. A momentary hostage Sam Tucker [Jay Ali] was freed in a trade for an unarmed Clint to the Moore household. Marcus [Derek Luke] however had no intention of Purging Clint but rather come to a peaceful resolution.

It appeared Clint forgave Marcus… Until he stabbed Michelle Moore when her back was turned! Clint believed by taking Michelle’s life, they would be even. Blood for blood. The love of his life was lost so should Marcus. Marcus would plead with the neighborhood to allow him and his wife Michelle [Rochelle Aytes] to go to a hospital. They obliged, accepting that Marcus had freed Sam and didn’t Purge Clint despite it being his right.

During the rush over, they would accidentally hit a sprinting Ben Gardner! Marcus and his friend would pick him up, not knowing the fate that will likely befall them once Ben is healthy once again. $500,000 is the price the NFFA laid on Esme Carmona’s head, #1 on their watchlist. Everything seemed to be going Esme’s way early on, hackers feeding false feeds of Esme showing her face on camera… Much to the suspicion of her boss but they still took the bait. It appeared like Esme was in the clear, until her car was hit during Purge chaos and rolled over. The shooter, a Friday the 13th looking Jason / Halloween Michael Myers-like hybrid spotted her. Recognizing the bounty on his phone. He would pursue Esme and for the first time, it looked like all might be lost for the former NFFA surveillance employee.

Esme barely edged out her pursuer, locking the door mechanically while shutting off the NFFA’s feed for 60 seconds to evade detection. Literally, barely making it out of the situation alive. The pursuer grew bored of being unable to open the door and appeared to leave the premises..

Tommy Ortiz: ‘We have to stay together to survive’ 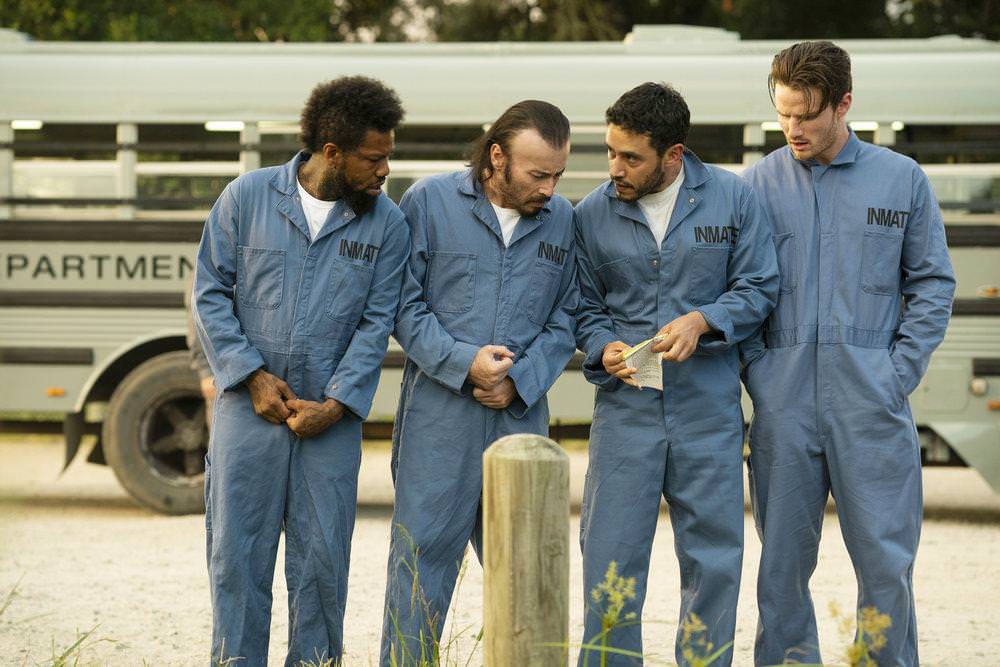 Tommy Ortiz believed his best friend Ryan Grant and crew would not let him down. He promised his fellow prisoners if they stick together they can survive whatever is coming… But if they separate it’s over. The prisoners surprisingly had faith in Tommy and remained as one. Ryan Grant bought his crew entry into the Daughters of the NFFA special hunt. The group was fully confident freeing Tommy Ortiz would be a cinch as long as they laid low and didn’t attract attention to themselves. They had the firepower on their side in leaps and bounds…

Modern weapons traded for ancestral ones as part of Hunt Then the news came, the Daughters of the NFFA dictated that this ceremonial hunt would use classic weaponry like their ancestors. All would still be okay in theory, as long as they freed Tommy before anyone grew the wiser that they were on the prisoners’ side. No anonymity in Purging without a mask However, one slighted Purger had met them before. Silas Barker [J.D. Evermore]… The man whose house they’d attempt to thieve. He would take shots at Ryan and the group. Ryan fired back, hitting Silas’ brother down dead. There was no going back for Silas now. He would get vengeance in any way possible. 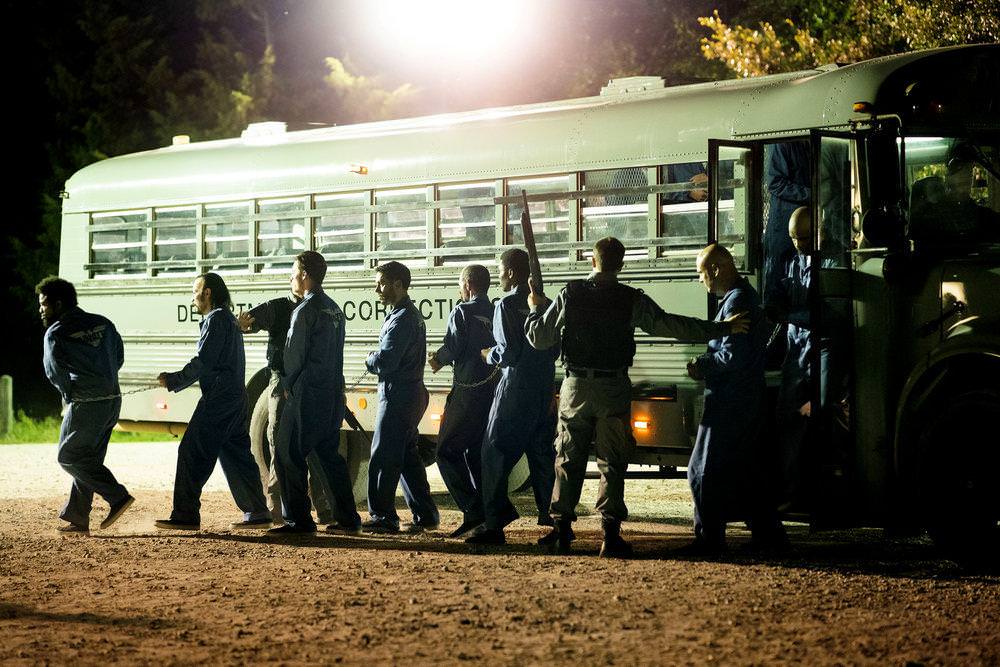 Ryan [Max Martini] would manage to free Tommy Ortiz [Jonathan Medina] and the other prisoners as they dispersed but was shot with a dart by Silas Barker. He passed out… Only for Silas to bury Ryan alive in a horrifying scene where he told him to “Eat Dirt” before piling pounds and pounds of dirt right on his face. Tommy Ortiz would manage to save the day, realizing what happened in haste after shooting Silas dead. Ryan Grant was not breathing and for a second it appeared he really had passed on but a couple of hits on his chest from Tommy brought him back to life. Tommy joked he was the one doing the rescuing after all…

Check out The Natural Aristocrat’s Interview with Joel Allen on Ben Gardner, including Ben’s connection to ‘The God Mask’ and the intense scenes in season 2 of The Purge!