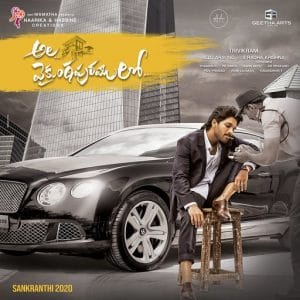 Ala Vaikunthapurramloo is an upcoming Telugu-language action comedy-drama film of 2020. Maverick director Trivikram Srinivas has directed the movie produced by Allu Aravind & S. Radha Krishna. The film stars Allu Arjun and Pooja Hegde in the lead roles with a huge assembled cast from southern film industries. S. Thaman is helming the music for the film, and the already released songs have become massive hits across social media platforms. Ala Vaikunthapurramloo is all set to release worldwide in January 2020 on account of Sankranthi festival. 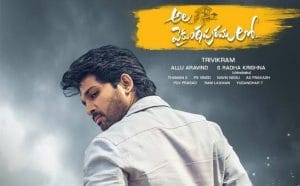 Ala Vaikunthapurramloo is touted to be a family entertainer with the necessary commercial elements of action, comedy and sentiments. The actual plot of the movie could be known after the release of the official trailer scheduled during its pre-release event. 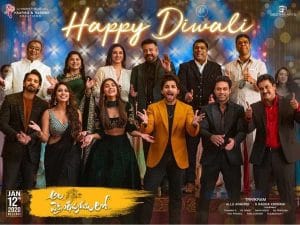 The first glimpse from the movie got released along with the official title poster on 15 August 2019. Allu Arjun is sporting a new look in the film after his previous debacle Naa Peru Surya.

The first lyrical song of Ala Vaikunthapurramloo got officially launched on 27 September 2019. Unlike other lyrical video songs, the song featured singer Sid Sriram along with lead artists performing the song in an incredible visual set. The song became an instant hit for its unique lyrics and music. The song has garnered over 126 million views till date with over 1 million likes.

The second song released on 26 October 2019 on account of Diwali. Ramuloo Ramulaa became a much bigger hit than the first song as the most viewed lyrical song in a single day with 8.3 million views which got later dethroned by ‘Mind Block‘ song from the movie Sarileru Neekevvaru. The song became the fastest to reach 100 million views, and half coat step has become trending too.

There are still two more songs to be released which would release in the upcoming days or at its Musical Concert on 6 January 2020.

The official teaser from the film got revealed on 11 December 2019. The teaser got well received from the fans and general audience. The thumping background music for the brilliantly cut teaser was the main highlight. It received around 10 million views within 24 hours of its release on YouTube and is nearing 20 million views. 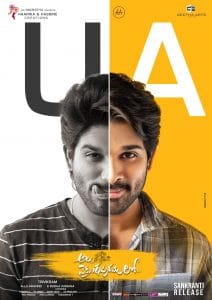