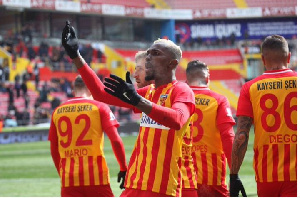 In world football, referees have one of the toughest jobs, as every one of their decisions could have a major role in the outcome of the game, and possibly the season as well.

Every referee has to make difficult decisions and will get criticized at some point of time by players, managers and the fans.

The good referees are those who can live with criticism and can make the correct decision most of the times.

It is unknown what triggered Mensah to lambaste officials in the league.

“Is a shame every week this referees making the same mistakes. Turkey is a great nation and people love football here but with these referees I don’t understand nothing .. they have to do something about this,” Mensah posted on his Twitter handle.

Mensah provided 6 assists and scored 3 goals in 19 games for Kayserispor in the ongoing league season.

Comments:
This article has no comments yet, be the first to comment