NPP National Chairman not cut for the job – Dr. Amakye 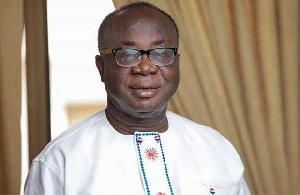 “Seriously speaking the party chairman is not really well cut out for the job. I mean he’s not the right type of person for the development of the party. The national chair, Freddie Blay, he stands accused. He lacks knowledge on the development of the party,” political science lecturer at the department of history and political studies at Kwame Nkrumah University of science and technology Dr. Kwasi Amakye-Boateng has said.

“The party would wish their experienced MPs are not contested and are given the opportunity to continue their work, but the question is how to manage this issue. frankly speaking it’s a complete failure on the part of the party. it’s a complete failure! Because they lack knowledge on the issue and do not know the right step to take, currently they’re using ambiguity, power, inconsistencies. They say a thing today and mean another tomorrow!” he yelled.

He, however, advised the party to use dialogue as a democratic principle to resolve internal issues relating to the primaries to restore calm.

NPP National Chairman not cut for the job – Dr. Amakye