Bill Gates And Convicted Pedophile, Jeffery Epstein, Were Close Friends Who Used To Laugh At His "TOXIC" Marriage To Melinda

Jeffrey Epstein suggested Bill Gates should leave his wife Melinda during dozens of meetings at the convicted pedophile's $77million Manhattan townhouse, according to a person who attended the 'men's club'-style get-togethers. 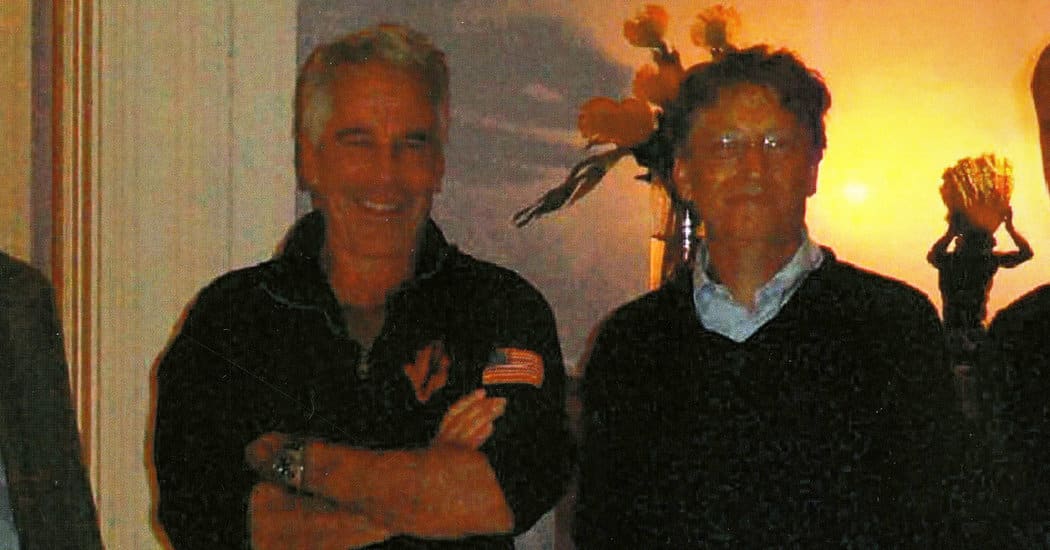 Gates' visits to Epstein's 'lair' were an escape from his unhappy marriage, and the pair 'were very close', the source told The Daily Beast.

The report alleges the pair's friendship blurred personal and professional lines, and was much closer than Gates had previously admitted.

A spokeswoman for Gates said he had never talked in a disparaging way about Melinda.

The Daily Beast revealed Gates sought Marriage advice from convicted pedophile Jeffrey Epstein during dozens of meetings at his $77 million Manhattan townhouse between 2011 and 2014, far more than had previously been reported.

Gates apparently told Epstein his marriage to Melinda was 'toxic', which both men found funny, according to the report.

Gates suggested Epstein become involved with the couple's philanthropic organization and 'rehabilitate his image' after his 2008 conviction for soliciting a minor for prostitution, according to a person who attended the meetings.

Melinda Gates was so incensed by the friendship that she started speaking to a divorce lawyer after the pair's close ties were first reported by the New York Times in October 2019.

The friendship between Gates and Epstein began in 2011, three years after Epstein had pleaded guilty to soliciting prostitution from a minor.

The Daily Beast reported on Sunday that the pair had met 'dozens of times' at Epstein's palatial $77m townhouse on Manhattan's Upper East Side between 2011 and 2014.

The pair would chat about science and philanthropy, as well as joking and gossiping in a 'men's club' atmosphere, the Daily Beast claimed.

Melinda Gates warned her husband Bill against any further contact with Jeffrey Epstein after the couple had an uncomfortable meeting with the convicted sex offender in 2013.

Melinda was 'furious' at Bill's relationship with Epstein after the couple visited the predator's Upper East Side townhouse in September 2013.

The meeting proved a turning point in Bill's relationship with Epstein, after Melinda expressed how uncomfortable she was with the sex offender and said she wanted nothing to do with him, the sources said.

Gates and Epstein became friendly in 2011 when Epstein pitched a fund to the Gates Foundation and JP Morgan.

When they met, Epstein had already spent a year in prison for soliciting child prostitution, but he was welcomed back into the upper echelons of New York society.

After their first meeting, Gates sent an email to colleagues saying of Epstein: 'His lifestyle is very different and kind of intriguing although it would not work for me.'

When the friendship was first revealed in 2019, Gates told the Wall Street Journal: 'I didn't have any business relationship or friendship with him'.

After further revelations came in the New York Times in October 2019, a spokeswoman said he 'regrets ever meeting with Epstein and recognizes it was an error in judgment to do so.'

Gates said: 'I didn't go to New Mexico or Florida or Palm Beach or any of that. There were people around [Epstein] who were saying, "Hey, if you want to raise money for global health and get more philanthropy, he knows a lot of rich people."'

After the latest claims were put to Gates, his spokeswoman said the 'characterization of his meetings with Epstein and others about philanthropy is inaccurate'.

'Similarly, any claim that Gates spoke of his marriage or Melinda in a disparaging manner is false.'

The same month the New York Times published details of Gates' friendship with Epstein in 2019, Melinda began consulting with divorce lawyers, which culminated in the announcement this month that their 27 year marriage was over.

Gates suggested Epstein become involved with the couple's philanthropic organization and 'rehabilitate his image' after his 2008 conviction for soliciting a minor for prostitution, according to a person who attended the meetings.

Gates' visits to Epstein's 'lair' was an escape from the marriage, according to the source, who claimed the pair 'were very close'.

The Gateses, one of the world's richest couples with a fortune of $130billion, announced this month they were getting divorced, with Melinda saying the marriage is 'irretrievably broken' in divorce filings.

7 Types of Businesses That Need Vehicle Access Control (And Why)

Bill Gates And Convicted Pedophile, Jeffery Epstein, Were Close Friends Who Used To Laugh At His "TOXIC" Marriage To Melinda