Prince Harry has sparked outrage in the US after describing the First Amendment - one of the country's most cherished founding principles - as 'bonkers'. 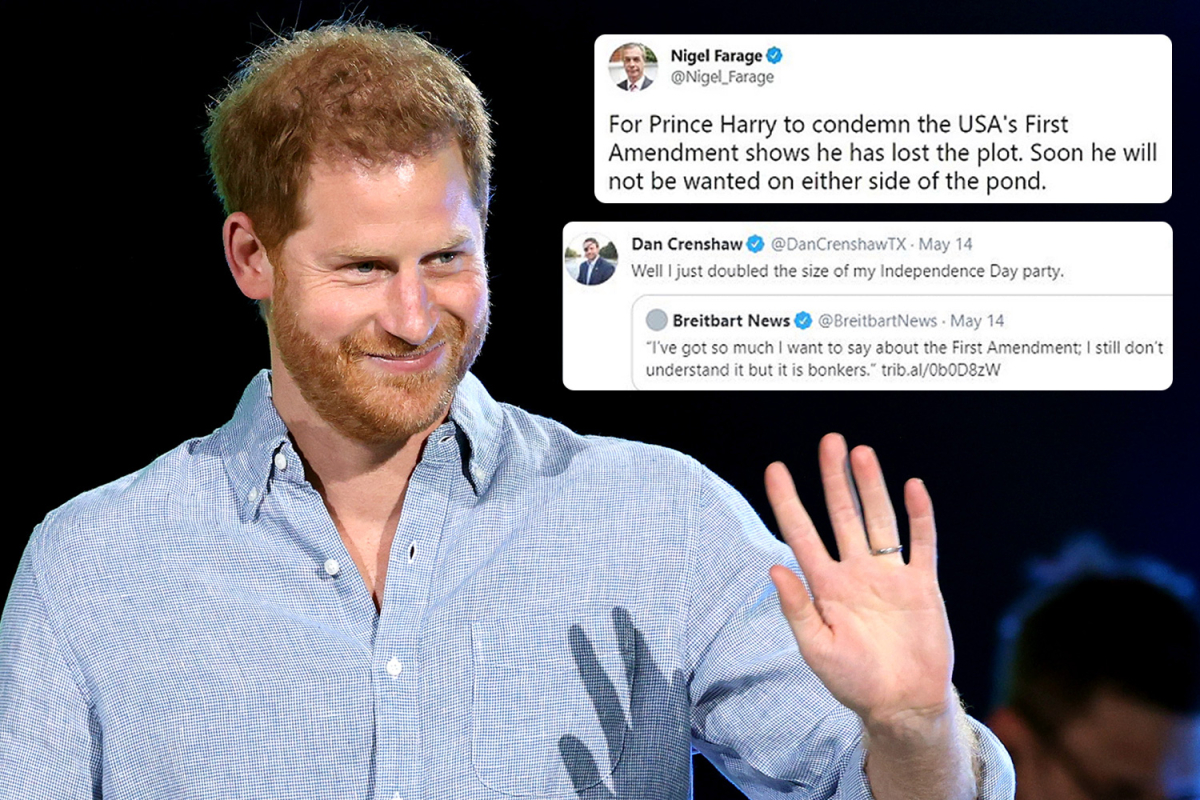 Harry appeared on Dax Shepard's podcast on Thursday, where he said he 'doesn't understand' the constitution's freedom of speech clause.

Critics noted the irony of a British royal weighing in on American politics, with Republican Texas congressman Dan Crenshaw tweeting: 'Well I just doubled the size of my Independence Day party.'

Brexit architect Nigel Farage added: 'For Prince Harry to condemn the USA's First Amendment shows he has lost the plot. Soon he will not be wanted on either side of the pond.'

During the recording, Harry appeared to be confused by the First Amendment which provides for freedom of religion, freedom of speech, freedom of the press, the right to assemble, and the right to petition the government.

'I've got so much I want to say about the First Amendment as I sort of understand it, but it is bonkers,' he said during the podcast last week.

'I don't want to start going down the First Amendment route because that's a huge subject and one which I don't understand because I've only been here a short time, but you can find a loophole in anything.

'You can capitalize or exploit what's not said rather than uphold what is said.'

The comments received little attention until they were mentioned in a Spectator magazine gossip column on Saturday.

Critics pointed out that Harry is a guest in his newly adopted country - and is free to return to the UK if he doesn't like it in the US.

At a glance: What did Harry say in the podcast?

He compared living under scrutiny as a member of the Royal Family to the film The Truman Show, starring Jim Carrey as a man oblivious to the fact that his entire life is a TV show, and to being an animal in a zoo.

Speaking about Prince Charles, Harry said: 'If I've experienced some form of pain or suffering because of the pain or suffering that perhaps my father or my parents had suffered, I'm going to make sure I break that cycle so that I don't pass it on, basically.

The Duke said he met up with his future wife Meghan in a supermarket in the early days of their relationship and they pretended not to know each other.

Harry told how he quit as a senior royal with Meghan last year to put his family and mental health 'first'.

Harry revealed Meghan told him of her experience of royal life: 'You don't need to be a princess, you can create the life that will be better than any princess.'

Others accused Prince Harry of criticising one of America's founding principles without trying to understand it first.

Another Twitter user wrote: 'Prince Harry having strong opinions on the First Amendment without understanding it or informing himself about it shows how well he is assimilating here.'

'Hey, go home! We fought a war to get rid of Royals on our soil No need to understand anything we do. Bye!!' said Twitter user Diane.

Larry Keane wrote: ‘Well, here in America he has the right to say stupid things.

And another Twitter user joked: 'I’ll fly to his house right f***ing now just to dump a box of Tetley in his pool if he keeps running his mouth like this.'

Prince Harry's comments come two months after he was named to a left-leaning panel to 'combat misinformation' in the media.

The 36-year-old appeared on Dax Shepard's Armchair Expert, to discuss mental health, his family, life in Los Angeles and his future projects.

He expressed shock at how much attention he received while living at film producer Tyler Perry's mansion in Beverly Hills, and complained of the media 'feeding frenzy' the podcast host Dax Shepard and co-host Monica Padman.

The First Amendment was raised as Prince Harry was discussing his experiences of being hounded by the paparazzi having moved to Los Angeles, and how his then-neighbor - actor Orlando Bloom - would keep him updated on their whereabouts.

In one instance, Harry describes how Bloom warned him of a photographer lying down in the back of a van as he and his wife Katy Perry were out in the local area with their young child.

In another instance, Harry recalls how paparazzi were flying helicopters and drones to get snaps of him and Meghan, and even cutting holes their fence.

Harry asked the podcast hosts: 'How is that normal? How is that acceptable?'

Shepard, who also shared his family's troubles faced with the paparazzi, spoke of how he and his wife - actress Kirsten Bell - started a social media campaign to shield children from press photographers called the 'No Kids Policy'.

'When we took this on, I didn't try for a second to say legally, this shouldn't be allowed, because I know our First Amendment is such that it is going to protect the press as in some ways it should. It's the Fourth Estate. That wasn't my argument,' Shepard told Harry, in reference to taking photos of celebrates.

He went on to argue that paparazzi should have a moral responsibility to not take photographs of celebrity's children, as they did not choose a life of fame.

In response, Harry said: I don't want to start sort of going down the first amendment route, because that's a huge subject and one of which I don't understand as I've only been in for a short period of time, but you can find a loophole in anything and you can capitalise or exploit what's not said, rather than uphold what is said.

'I believe we live in an age now where you've got certain elements of the media redefining to us what privacy means. There's a massive conflict of interest.

'And then you've got social media platforms, trying to redefine what free speech means [...] And we're living in this world where we've almost like all the laws have been completely flipped by the very people that need them flipped [...] can make more money and they can capitalise off our pain [and] grief.

'I’ve got so much I want to say about the First Amendment. I still don't understand it, but it is bonkers,' he added.