Withholding My Certificate Of Return Can Cause Trouble - Rochas Okorocha 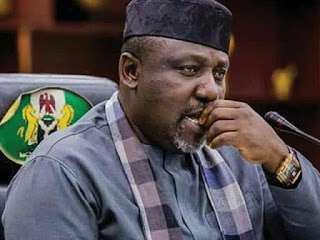 Imo State Governor, Rochas Okorocha has warned that INEC’s withholding of his certificate of return has the capacity to fuel tension in the state. Okorocha, who reacted to his exclusion from those to receive certificate of return, said the move was based on allegation without hearing his own side of the story is unjust. INEC had earlier released names of those to be given the certificate of return. In the list of Senators-elect, there were 109 slots, however, Okorocha’s name was omitted following claims by the returning officer of Imo west senatorial district election Professor Innocent Ibeabuchi, that the results for the district and the declaration that followed were pronounced under duress.

Okorocha, however, said that the action by INEC was an insult to his person and a mockery of Nigeria’s fledgling democracy. Addressing some youths at the government house in Owerri the Imo state capital, Okorocha alleged that he was aware that INEC had colluded with some of his political enemies to deny him his mandate. The governor appealed to INEC to do the needful and uphold his mandate and present him his Certificate of Return.

Withholding My Certificate Of Return Can Cause Trouble - Rochas Okorocha