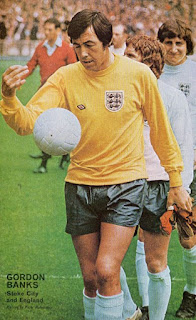 Regarded as one of the game’s greatest in his position, Banks was named Fifa goalkeeper of the year six times and earned 73 caps for England.

He is perhaps best known for his wonder save from Pele during the 1970 World Cup against Brazil.

Born in Sheffield, he won the League Cup with Stoke and Leicester, before retiring in 1973.

“It is with great sadness that we announce that Gordon passed away peacefully overnight,” his family said.

“We are devastated to lose him but we have so many happy memories and could not have been more proud of him.”

England and Manchester City forward Raheem Sterling was among the first to pay tribute, tweeting: “Of course there was that save, but it’s so much more we are mourning today. RIP Gordon Banks. England legend, your legacy will live on.”

Former England striker Gary Lineker said: “An absolute hero of mine, and countless others, England’s World Cup winner was one of the greatest goalkeepers of all time, and such a lovely, lovely man.”

BBC reports that Banks started his career at Chesterfield, before joining Leicester in 1959 for £7,000, and it was at the Foxes that he established himself as England’s number one, earning his first international cap in 1963 against Scotland.

He played in every game of the 1966 World Cup campaign, culminating in the 4-2 victory over West Germany in the final at Wembley.

In eight years at Leicester, he was runner-up in two FA Cup finals and won the League Cup in 1964, before joining Stoke in 1967.

He stayed at the Potters until his retirement from professional football, winning the League Cup again in 1972, the club’s only major honour.

Later that year he lost the sight in his right eye after a car crash.