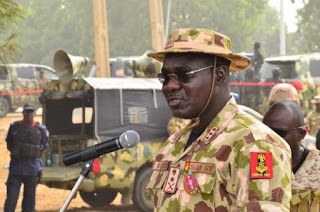 The Nigerian Army on Sunday warned those it described as mischief makers to steer clear of dragging it or its leadership into matters that are purely political.
It insisted in a statement issued by its Acting Director, Col. Aliyu Yusuf, that the Army is an apolitical institution and would continue to remain so while carrying out its constitutional responsibilities.

Traffic Wardens reject new uniform ba…
How to Create a Winning Black Friday …
Four Things Jesus Says About a Discip…
Olomana Trail Hike {Three Peaks Oahu …
Shah Abbas Rug Design
Yusuf was reacting to an allegation by Timi Frank, a former chieftain of the All Progressives Congress – APC, as published by a section of the media.
He said Frank alleged in the publication that President Muhammadu Buhari and some INEC members held a nocturnal meeting with the Chief of Army Staff, Lt.-Gen. Tukur Buratai, with intent to rig the Saturday Presidential election.
He, however, said the army had reported the said Timi Frank to the Nigeria Police “for immediate arrest and prosecution for fake news and related offences against the leadership of the army.
Yusuf described Frank as a “disgruntled person, who has severally tried to malign the person of Buratai.”
“The deluded Timi Frank, who claimed he had incontrovertible evidence provided by sources in the know about the alleged nocturnal meeting, however, could not substantiate his accusations with any reasonable facts besides his concocted hogwash.
“For the record, as well as for the education of the likes of Mr Timi Frank, the President, C-in-C is at liberty to hold a meeting with his Service Chiefs at whatever time most suitable, which was not even the case here, as nothing of such happened,” Yusuf said.