VPNs are a Windows user’s best friend, but what exactly can you do with them?

That’s what we’re going to discuss in this quick article. If you’d also like to find the best VPNs for Windows, see them all here.

First Things First – What Is a VPN & How Does It Work?

It’s an online service that encrypts your web traffic and “hides” your IP address. Here’s how it does that:

This list is based on our own research, our personal experience, what our readers have told us, and what we’ve seen other people say on Reddit and Quora:

You Can Hide Your Browsing

Tired of your ISP seeing what websites you browse at night?
No problem – just turn on the VPN, and everything you do online will stay between you and your screen.

The service will encrypt all your traffic, preventing your ISP from inspecting your data packets. Also, using a VPN will stop your ISP from seeing what IP address you connect to. So they won’t know what websites you browse.

They’ll only see this: 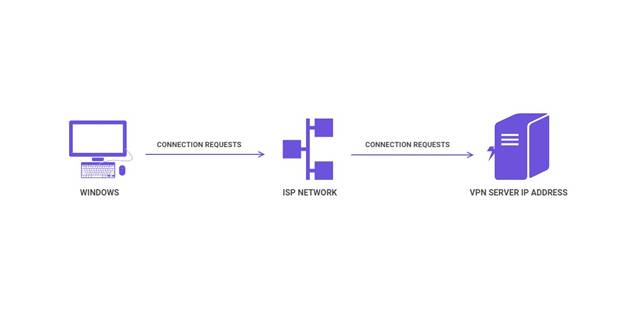 You Can Protect Your Data on Public WiFi

Public WiFi sure is convenient. It’s right there when you need it, and you don’t have to bother with passwords most of the time.

But did you know the lack of passwords is also dangerous? It means the network doesn’t use encryption. So hackers are free to monitor your online communications with packet sniffers.

Sure, you can add a layer of security by only browsing HTTPS sites, but cybercriminals can still try to intercept your data packets by performing MITM attacks.

Okay, no problem – I’ll only use encrypted WiFi from now on.

We have bad news – that option isn’t 100% safe either. Most networks use the WPA2 encryption standard. And WPA2 actually has a serious vulnerability which hackers can abuse to decrypt network traffic. WPA3 should fix that problem, but it’s still a long way from reaching full deployment.

Also, here’s another problem – cybercriminals can set up fake WiFi networks, and trick your device into connecting to them. Once successful, they can monitor your traffic to steal sensitive data.

Luckily, you can avoid all that trouble if you use a VPN. It encrypts your traffic, preventing hackers from snooping on it. Yes, even if you accidentally use fake networks.

You Can Unblock Geo-Restricted Sites

Ever got a message telling you something along the lines of “the content isn’t available in your area” when visiting websites?
That’s geo-blocking in action. It’s a form of content control technology that allows websites to restrict user access to their platform based on their geographical location.

How do sites know what country you’re from? It’s simple – your IP address tells them what country and city you are from + who your ISP is and what your ZIP code is.
And any website can see your IP address. You send it over in a connection request when you type their name and hit enter in your browser.

Using a VPN on Windows solves that problem by hiding your real IP address from the websites you visit. Your connection requests will go through the VPN server, so the websites you access will only see the server’s IP address, like so:

So if you want to unblock the Netflix US library, you just need to use a VPN server in the US. When the site gets your requests, it will see an American IP address, so it’ll think you’re connecting from that country.

You Can Bypass Firewalls

Dealing with annoying firewalls at school or a hotel?
Using a VPN on Windows is an easy way to get around them. Here’s why:

You Can Stop Bandwidth Throttling

That’s when your ISP intentionally lowers your online speeds. They might do it because they:

Whatever the reason, the result is the same – you get random slowdowns that ruin your online experience.

But if you use a VPN, your ISP can’t do that anymore. They can’t see your browsing, so they don’t know what sites you browse.

Also, your data packets are encrypted, meaning your ISP can’t analyze them anymore to see what specific web apps you use (like Steam, for example). Thanks to that, they can’t selectively throttle your bandwidth.

You Can’t Stop Microsoft from Spying on You

Windows 10 sure has come a long way. Nowadays, it’s an OS that runs much better than its predecessors. Despite that, many people still have a problem with how much data the OS collects and sends to Microsoft’s servers.
Unfortunately, we’ve seen many people say you can use a VPN to limit how much data Windows 10 collects.

Well, we’re sorry to be the bearers of bad news, but a VPN can’t help in this case. The OS collects a lot of data at the hardware level. A VPN can’t do anything to make your hardware more private. It can only protect your privacy when you’re browsing the web.

The only way to limit how much data your OS sends to Microsoft is to do the following:
But even then, the OS will still send some data about your device to Microsoft’s servers. To learn more about that, we recommend checking out this guide.

We have also seen people say a VPN can protect your device against malware infections.

However, that’s not true. A VPN can stop hackers from spying on your traffic or targeting you with MITM attacks, but it’s not designed to stop malicious files and code from infecting your device.

At best, a VPN can offer a firewall-like feature that blocks connections to malicious domains (like NordVPN’s CyberSec feature).

So make sure you always use an antivirus program alongside your VPN.

Another common misconception is that you can use a VPN to get rid of tracking cookies on your Windows device.

We don’t really see how a VPN could help you do that. It’s only designed to encrypt your traffic and mask your IP address. But cookies are text files that end up on your computer when you visit a website. There isn’t a single VPN feature that can stop them from doing that.

But You Can Get Rid of Supercookies

On the plus side, using a VPN on Windows can protect you from your ISP’s supercookies. They are tracking files that contain UIDH (Unique Identifier Headers) that help your ISP recognize your device and track your online browsing.

You can’t get rid of them like normal cookies because they’re not stored on your device, but on your ISP’s servers. And they insert them into your data packets when you browse the web.

Well, since a VPN encrypts your data packets, your ISP shouldn’t be able to insert the supercookies into them anymore.

What’s the Best VPN for Windows?

Finding the right one is pretty tough. There are hundreds of VPNs on the market, after all.
So we’ll make things simple for you. See them all here in ProPrivacy’s ultimate guide to the best VPNs for this OS.

Have Anything Else You Want to Add to the List?

Go ahead and let us know – either in the comments or on social media. If the info is relevant and actionable, we’ll include it in the article, and we’ll also credit you.