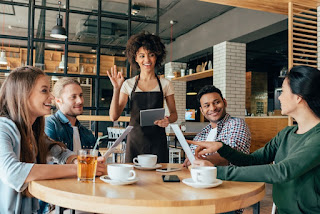 But some people who work in restaurants show up every day because they can’t imagine doing anything else for a living. They love it, from the atypical work hours to the adrenaline rush of being slammed for hours on end, to the camaraderie that builds when working under intense pressure.

They love getting off work after a long, hard shift and drinking a beer or a glass of wine and talking about how the service went. They love going to other restaurants on their day off and ordering food like they’re the host of a television show on the Food Network. It’s a lifestyle, and they wouldn’t trade it for the world.

But someone who really loves their career in a restaurant will work hard to constantly improve their skill set, whether that be cooking skills in the back of house or bartending and customer service skills in the front of house.

Cooks who want to become chefs one day will often stage (pronounced “staahj”, like you’re French) at other restaurants. This involves volunteering to work for free in the kitchens of other restaurants, and it usually means giving up your days off to do it.

When someone decides that they want to become a chef - or at least, the best professional cook that they can be - they find a dedication to their craft that might amaze someone who works the usual 9 to 5 office-type job with weekends and evenings off. A dedicated restaurant cook knows no concept of days off, holidays, or weekends.

Many of them don’t even know what it feels like to work an 8-hour day; they’re used to 10- and 12-hour days being the norm. Their days off are usually mid-week, and many times they’re called in on their day off to cover for another cook who quit without notice or called in sick. (The most hardcore cooks won’t call in sick; the chef will have to send them home if he doesn’t want them handling food.)

As if that weren’t enough, they typically have at least one shift a week where they hardly get any sleep between services. For example, they may work a closing shift on Saturday night and turn around and work the opening shift on Sunday morning. This is called a “clopen,” which is short for “close-open.” The turnaround is brutal, especially because Saturday nights and Sunday mornings are two of the busiest shifts a cook will work all week.

After months and years of working like this, a dedicated cook will contact chefs at restaurants throughout the country and ask permission to come and stage for a few days. Imagine leaving your job on Friday, flying to San Francisco or New York early Saturday morning, working harder than you did all week on Saturday and Sunday nights.

Then, you have to fly back to your hometown Monday morning and report for work Monday afternoon, just to do your regular work week all over again. That’s what it means to be dedicated to your craft, and many cooks do it, except they don’t have a nice office job. They have a sweaty, loud, on-their-feet-all-day kitchen job.

And when they stage, it often involves couch-crashing with friends or in a car during the few hours they have to sleep. Only the luckiest will have access to the opportunity to stay in corporate housing. But it’s a way for cooks to learn techniques from other chefs, and to experience the culture and camaraderie in other kitchens.

It’s hard work, but in the end the payoff may be worth it. Becoming the chef of a restaurant after all those years of backbreaking work can feel like an enormous honor, even if it means working even harder.