Did you ever think of a Robot that can do simple tasks such as cutting paper with a scissor, moving eggs, serving a glass of water, or playing the piano? If not, you can see this happening now.

Photo by Franck V. on Unsplash

Why Should I Trust God Day By Day as …
Short Happiness Quotes From Famous an…
JoJo Siwa le presenta al mundo a su n…
How Do You Get Bed Bugs?
Jumia Review: My best & worst buys
At the moment, the robot can manipulate various objects and tools in everyday life, such as picking eggs and scissoring eggs, but it is expected that the use of the robot hand will be extended to the industrial field. The robotic hand mounted on a cobot arm can do plenty of industrial tasks as the combination provides the world's highest grip strength.

Structure and Composition of the Robotic Hand

The researchers took the Human hand as a model, and thus imitated the structure of the fingers, and their movements.
Like a human hand, this humanoid robot has four fingers and 16 joints, and each of the parts, capable of moving independently of the rest, is set in motion by 12 engines. This allows the hand to operate in a small space and with a large number of degrees of freedom.
The team developed a mechanism to move the robot hand's finger to a level similar to that of the human hand. In particular, it has succeeded in modularizing by installing a driving unit that moves the finger inside the palm. The robot hand can be easily mounted without changing the structure of the existing robot arm, thereby increasing its utilization.
It is also lighter and more powerful than conventional commercial robotic hands. According to the creators, this humanoid robot hand weighs less than 1 kilogram, whereas it can carry an object of more than 3 kilograms. 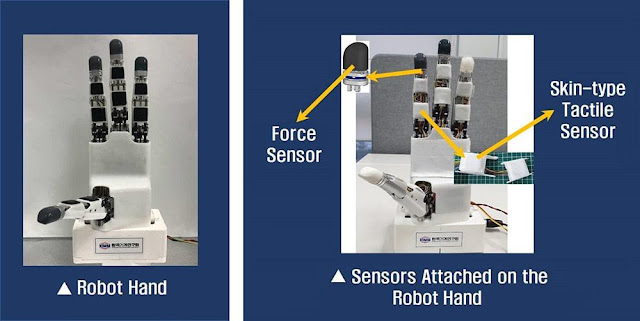 The team developed a force-measuring sensor and attached it to the fingertips, nodes, and palms to provide tactile capabilities to detect contact with objects. The force sensor mounted on the fingertip is a microsensor with a diameter of 15mm and weighs less than 5g. With these specifications, the sensor can measure the magnitude and direction of the force detected at the fingertip when the robot hand and object are in contact. It is the key to controlling the power to hold things.
Finger joints and palms are also equipped with skin type tactile sensors. The skin tactile sensor measures the distribution and force of the contact area when the robot's hand touches the object.
The commercial robot hand developed so far has limited use because it has a built-in tactile sensor, and at the same time, there is no modular product equipped with a finger drive inside the palm of the hand.
Dr. Hyunmin Do, a researcher at the Institute, said in a release, "The humanoid robot hand was developed to handle various objects such as the tools we use in everyday life by imitating the delicate movements of the human hand." But in addition to this direct use, is also expected to be used as a research platform for studying the grasping algorithm of robot hand and manipulation intelligence.