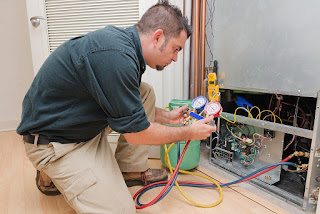 When your AC goes on the fritz time and time again, you may start to contemplate whether to keep going ahead with repairs, or whether it would be the better option to replace your air conditioning system entirely. Keep in mind that nearly anything can be repaired as many times as you need it to be, but whether or not it's worth the continuous effort depends on a few different factors.

The costs involved can be the dealbreaker for many homeowner decisions. Choosing whether to opt for AC repair or hire an air conditioning replacement service is no exception. There's a general formula used to calculate the cost advantage or disadvantage, and that formula is fortunately quite straightforward.

Even though it's entirely possible to push your old AC to its limits by repairing it as much as possible before the only option left is to replace it, your AC, like everything else, won't last forever. The general lifespan of a properly maintained AC unit is 10-15 years, so replacement is a good idea if your AC is older than ten years and an even better idea if it's older than 15.

Again, it's possible to push your AC past 15 years, but nobody recommends it. Times change, and so does the build of air conditioners. You could go the extra mile and install a dehumidifier or programmable thermostat if you wanted to. Still, many newer air conditioners are overall more energy-efficient and have built-in technology that older units don't possess.

Not to mention, R-22, the type of refrigerant your AC uses for cooling, is being phased out and replaced with R-140a. With R-22 becoming less used, the price has spiked, meaning repairing a coolant leak in an older AC unit could be significantly more costly.

If you encounter several minor issues, there's nothing wrong with getting them serviced one by one to fix up your AC. If more significant parts break (like the compressor or the condenser) regularly, however, repairing them over and over might not be the best in terms of cost.

When your AC doesn't cool properly, always runs, and is unusually noisy every time it operates, repairs probably won't cut it. The same problems repeated over and over, even after temporary fixes, are only going to drive up your energy bill and put your AC way behind in the game.

In general, deciding whether to repair or replace your air conditioning system depends on the problem (or problems) at hand. The best thing to do is speak to an HVAC professional to help you asses the problems, estimate a cost for you, and give you that second opinion that you need. While you can technically fix nearly every issue, it's better to consider whether or not those fixes will hold up over time.