Portable Rock Art finds have huge resistance in some online communities, just pop along to a forum of native American artifacts, post a picture of a worked stone showing some resemblance to a creature, sit back and watch the fireworks. Its not just people on arrowhead forums that are in denial here, there is professional resistance to the idea, and even suppression of the evidence and attempts to block mainstream acceptance.

Well perhaps its just avocational archeologists with overwhelming evidence such as myself that are met with such ignorance? No, here is an excerpt from a recent article from PCN magazine, the article sheds light on a professionally authenticated bear effigy found in a Clovis cache, publication of which has been 'held up for 12 years.' but the excerpt is about the highly regarded Dr. Virginia Steen-McIntyre, and ignorance of any facts that shed serious doubt on the mainstream narrative.

'For Dr. Steen-McIntyre resistance to her evidence of pre-Clovis artistic people (confirmed by eminent USGS geologists and chemists and even the designer of NASA’s Apollo missions moon core samplers and instructor of the astronauts, not to mention discoverer of one of the oldest human fossils in the Western Hemisphere) has persisted well past ‘50 years.’ It is unfortunate a low-integrity field whose dogmatic resistance to evidence that could change our picture of prehistory led to the eventual destruction of the 250,000-year old Hueyatlaco early man site in Mexico. Such—among many other documented examples—is why we periodically remind readers the field cannot be trusted as a ‘science.’'

You can download the full issue of, including the article here, but I highly recommend that you subscribe to the PCN Magazine free mailing list as well. I am very grateful to have Dr. Steen-McIntyre work on my article to make it fit for publication in PCN. My PCN article, and the full version on this blog) 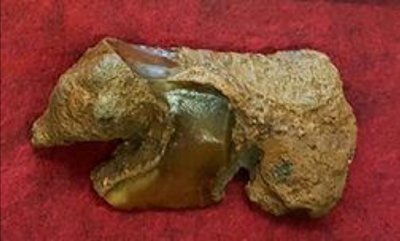 Above: This is the bear effigy found by Dr. Mark Corbitt amongst a confirmed Clovis cache.

Diatom dating was used to confirm the age of the cache as Clovis, but that does not mean the find is a Clovis artwork, its entirely possible that the find is from a much earlier date, bore an interesting bear likeness and so was added to the Clovis cache. Obviously I would agree this is a piece of portable rock art, but is it a figure stone by my definition? (Figure stones are possibly much older and I suggest often have a purpose and a common topology) The find does have some similarities with my own finds here in the UK:

Abstract Art: What Is So Special Abou…
Cabbage Production Guide
“The Friend Who May Not Seem a Friend…
Music Profile: Elliott Waits For No O…
51 Best Start-up Ideas to Try

1. The flake removal is precise and minimal.

2. A natural flint nodule with some desired visual features has been selected as the medium.

3. Cortex carving has been used to add finer details. (cortex is the outer casing of flint nodules)

4. The subject is that of a bear, in profile, commonly found in my own finds, and recognized by many as a common subject of figures stones.

I am not 100% convinced this is an ancient figure stone (I would love to see more pictures), although I can see a possible partial glyph of a long necked water bird  (upper middle). I would like to see a convincing Proboscidean front half and the head profile of an ape or monkey like depiction to be 100% on this, or the signature thumb or hand holding a rock glyph so often found in paleolithic flint tools, but completely ignored by the mainstream........

This post first appeared on Portable Rock Art And Figure Stones - Eoliths, please read the originial post: here
People also like
Abstract Art: What Is So Special About It?
Cabbage Production Guide
“The Friend Who May Not Seem a Friend” – The Cat and the Fire, Post 2 of 3
Music Profile: Elliott Waits For No One - Alternative Rock Band - Illinois, Usa | SRL Networks London Music PR
51 Best Start-up Ideas to Try
What Causes Bed Bugs?