This article will help you to understand Figure Stones, recognize them and even find your own ancient works of art, here I reveal the secrets. When you find a good quality figure stone, and I have every confidence that you can, you will know and understand how wrong many common theories of the distant past are, the truth will set you free.

"Symbolism is the language of the Mysteries; in fact it is the language not only of mysticism and philosophy but of all Nature, for every law and power active in universal procedure is manifested to the limited sense perceptions of man through the medium of symbol.... By symbols men have ever sought to communicate to each other those thoughts which transcend the limitations of language. Rejecting man-conceived dialects as inadequate and unworthy to perpetuate divine ideas, the Mysteries thus chose symbolism as a far more ingenious and ideal method of preserving their transcendental knowledge. In a single figure a symbol may both reveal and conceal, for to the wise the subject of the symbol is obvious, while to the ignorant the figure remains inscrutable. Hence, he who seeks to unveil the secret doctrine of antiquity must search for that doctrine not upon the open pages of books which might fall into the hands of the unworthy but in the place where it was originally concealed."
The Secret Teachings of All Ages, Manly Palmer Hall.

Figure stones, stones which have been modified to show figurative descriptions, are often dismissed as being a product of fanciful interpretation and imagination. Many factors suggest otherwise.

To the uneducated the ancient Chinese characters above appear as grouped random squiggles and brush strokes of ink.

Are you seeing things?, Understanding figure stones, how do figure stones work?
First, an arbitrary assertion that an image perceived in a find is purely a product of imagination is not evidence-based, also if someone is unable to see something, perhaps their mind is unable to process the information given. An example of this could be the 'magic eye' pictures that were popular in the 90's.

To appreciate art of any kind requires an, often complex, knowledge of the period and capabilities of the culture that produced it.  An uneducated man, may, for example, naively interpret much of the output of the Cubist movement as the product of mere childish attempts at representation through unskilled use of color mediums.  To appreciate the full meaning latent in these works, however, requires an education including an understanding of the intellectual development of the artists participating in this school as well as the materials they had available and what could be achieved with them.

In the same way, to appreciate the art in many figure stones we first must learn how to view them. Common topology of figures and certain tricks of the mind are often apparent. Viewing a potential eye feature in a find as an 'eye' allows the mind to unlock the figure in some cases, and the rest of the figure forms around it, other subtle markings in the find then form other features such as mouths and ears (see fig 2). I call such features 'triggers'. You're not imagining these features, they are there, but somehow the mind is able to make sense of otherwise ambiguous markings and flake removals. No doubt our ancient predecessors had this cognitive ability too, it would aid in recognizing potential threats from partially obscured predatory creatures. Having a visual memory of finer cleaner examples aids in recognizing the subtle and less obvious. 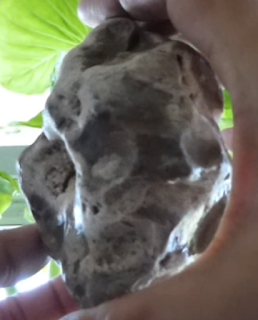 In stone above  a face can be seen. Science is predictive, this is a predictable face description to find.

Figure stones can have multiple eye shapes, and combined figurative expressions of differing head, front half, part- or full-bodied profile shapes that make ambiguous optical illusions.  So many they can hold many figures seemingly for efficiency, and to carry as many figurative descriptions as necessary for practicality, one stone ten descriptions is more practical than carrying ten stones for ten animal descriptions. 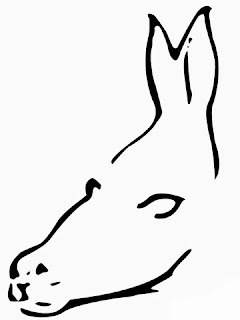 (fig 2)An example of a modern ambiguous optical illusion. Can you see the seal and the donkey head?

Figure stones frequently hold multiple images of different creatures that can be seen when holding the stones in different orientations: sometimes of just the head, sometimes the front half of a creature, sometimes part- or full-body profiles.  As above, a key to these multiple interpretations can often be found in the different workings that form eye-depictions.  Identifying the different eyes leads to recognition of each complete figure.  These multi-image figure stones would save the user from having to carry so many different stones in order to convey the multitude of different images they would need, on say, a hunt. Figure stones often also employ ambiguous optical illusions. 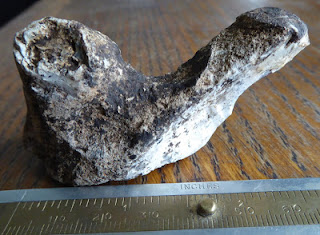 Above: An image of a bird on a nest facing left? or the image of a baby crocodile head emerging form the water facing right?

In the same way that a strong familiarity with letters of an alphabet and the words of a language makes it a 'no-brainer' that there is writing on a piece of paper, familiarity with the figures, conventions and triggers ubiquitous in figure stones can be a great aid in identifying genuine figure stones.

When you have insight into the common conventions and topology, figure stones become easier to recognize and read. Not all figuration has to be highly detailed and accurate, shapes can be ambiguous and have few details, or triggers but still satisfy recognition. An example of how this works is demonstrated in the representation of a mud splattered parking sign below. 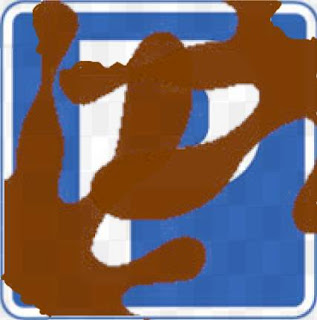 If you were looking to park a car, you could easily recognize the sign above, even though much of the detail has been obscured.

In this way symbols can be simple flint nodules and have few modifications to practically convey various figures, a simple 'P' shape can convey numerous figurative expressions, figuration being condensed. However the broken nodule here, below, has some tiny cortex carving, some minimal embellishment, having many figurative abilities by simply turning it around, and even animating it in the hand for clarity of meaning. Fortunately not all figure stones are so subtle, I have built on the common depictions, topology and conventions from some highly detailed examples. 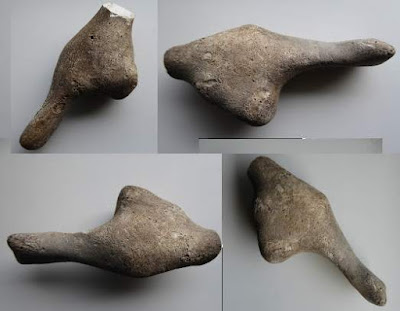 If your new to figure stones and you've got this far into this article you may find the above very hard to accept, this is probably because you have some preconceived ideas about the past, man and dinosaurs never having met for example, or that you find the likenesses very subtle compared to the figuration I have suggested. Now if you were more familiar with figure stone common depictions and convention you would no doubt be much more accepting of the above, before you could read, letters were no more than odd shapes on a piece of paper. 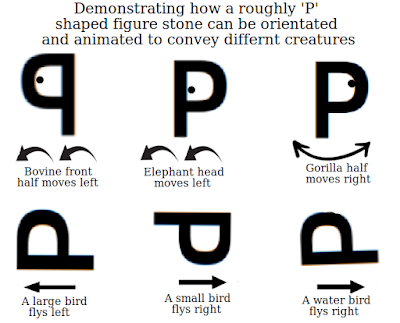 'Another problem is raised by the so-called 'figure stones', which are nodules with very little trimming or adaptation, but with fanciful resemblance to various animals, birds, reptiles, and even human beings. The flake which generally forms the 'eye' is often minute and in the right place, but the identification of the figure is largely a matter of conjecture, though some examples are almost convincing. Weather figure stones are due to man or to nature, it may be urged that the earliest sculptures known are in the round (as opposed to engraving or low relief), and it is not unreasonable to suppose that man's first attempts at art consisted in giving the finishing touches to a nodule in order to create or improve a likeness to some real or imaginary animal. One of the earliest instincts of children is to mold figures in clay, and this in itself might be used as an argument for the great antiquity of sculptures in the round' Reginald Smith, 1932, British Museum from 1927-1938.

It's all in the details.
Interpretation of the creatures displayed in figure stones is subjective conjecture.  Iteration and highly detailed specimens gives us the best hope of understanding them and identifying any species, topology and convention pay a big part here also.  The design complexity and skill involved does not reflect an expected level of cognition for ancient man, in many pieces. Images can be anamorphic, contain animations and optical illusions, the artists also used light and shadow as paint, with carefully considered chips, or pecks.

Topology and Repeating Conventions.
The only 'naturally worked' shape topology to be found in unmodified flints is the rounded oval shapes of pebbles. Flint tools and figure stones show their own man made topology, this topology is proof of design, modification, selection and intent.

1. Throughout art history a repeating topology of technique is shown, that of side profiles of the subjects to be depicted, in most cases this is exactly what figure stones show, side on profiles, and not just one side on profile in each example, but many. Figurative descriptions are most often shown in head profile and front half profile.

2. Figure stones often have numerous eye shapes, these are produced by a sequence of agency effects, multiple actions in a small area to produce an eye shape, and almost always as part of a more detailed figurative description. Naturally occurring eye shapes are a rare phenomenon in stones, let alone the fact that they are often accompanied by detailed ear shapes, nose shapes mouth shapes and repeating subject profiles in genuine figure stones. Eye shapes are not always flaked, in many finds a tar like pigment and ochre are used rather like paint, these are both known to have been used ubiquitously by prehistoric peoples.

4. Many figure stones show numerous creature descriptions, each having numerous facial or bodily feature representations. These can often be recognized as being of known creatures, probability validates authenticity. Can you find a stone showing numerous random vehicle descriptions? No?, unbelievers should look for vehicle shapes in stones, then look for known figures.

5. The same repeating subjects and popular motifs can be found across numerous individual samples, we have common theme's and this again is statistically unlikely to have anything to do with random chance.

6. Repeating combinations can be found, for example the elephant head figure can easily be combined with the swan figure, this blog has many examples of a repeating pattern of combined creature motifs across numerous samples. This is another set of unlikely probabilities that have an observable topology.

7. Over all basic outline and shape topologies are present, just some very close shape matches can be seen.  These can also contain sub sets of topologies, for example the thumb nail shape and elephant eye shape being present and correctly aligned and located.

8. Creature figures are most often framed by the outside edge of the stone, this is very significant in knowing they are deliberate depictions, the figures are not appearing out of a mess and jumble of features, like the faces in random squiggly patterns do.

9. The aforementioned topologies and conventions can be found in recognized stone tools.

10. Individual figures can be tested for in large assemblages of shapes of stones, for example if you collected large numbers of roughly 'P' shaped stones, you could check for eye shapes in the correct locations for that of an elephants head.