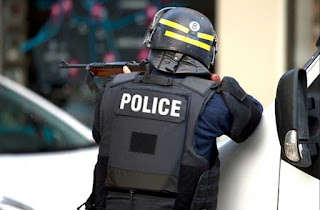 Wonder they say shall never end as disgusting things keep happening right before our eyes. It was a big shocker in Anambra State as 14-year-old boy identified as Eberechi and three other suspects were arrested by the police for allegedly raping a mad woman and abducting her 3-year-old child at Umunze in the Orumba South Local Government Area of the state.

The names of the other suspects are Emeka Nnorue, 44, Ekene Obodoako, 27 from Ebonyi State, and Chika Obi, 28 from Anambra State.

According to the police, the woman who gave her name as Obiuwanne from Amazu-Ikpaocha, Arondizuogu in Imo state, and her child simply identified as Ifeanyichukwu, were approached by the suspects with a promise to provide them with food items and snacks.

The suspects then asked the woman and her child to follow them to an unknown destination. They carried the woman into the bush on a motorcycle, raped her and abducted her child.

One of the relatives of the woman, Martin Okoro, said he reported the matter to the commander of a vigilance group in the area.

Read Also: How I lost my virginity to gang rape at age 17 - Lady shares her story

“As soon as my niece was brought back home by a neighbour and narrated her ordeal, I contacted the Commander of Umunze Vigilance Group, Jerry Ibeh, who organised a search for the missing child.” the relative said

Confirming the incident, the spokesperson of the state police command, Haruna Muhammed, said the victims were rescued from the suspects following intelligence report.

Read Also: How I enticed, raped and killed a National Youth Service Corps member in the forest - Suspect reveals

He said the suspects would soon be charged to court after investigations into the matter has been completed.


This post first appeared on Naija News Updates, please read the originial post: here
People also like
Carpenter Ants in House
How Gender Equity Impacts the Bottom Line
How To Run a Beauty Salon And Not Lose Your Own Beauty
“The Friend Who May Not Seem a Friend”: The Cat and the Fire, Part 1 of 3
ALBUM: Master KG – Jerusalema (Deluxe)
Music Profile: Jackie's Boy - R&B Artist - Georgia, Usa | SRL Networks London Music PR
Damilare Tolu Ogunleke 4 Months In Prison – $5700 Gift Cards
Sex on Your Period – Reasons to Do It
Mini relatos lésbicos: «Silencio»