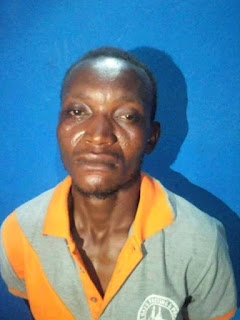 Adewale Olakusi, who is a paedophile, has been reportedly arrested in Otta, Ogun State Nigeria, for allegedly raping his neighbor's 13-year-old daughter.

The Ogun State Police Public Relations Officer, Abimbola Oyeyemi, said the suspect was arrested on Saturday, September 1st, 2018, following a complaint tendered by the father of the unlucky girl.

He said the father reported at Onipanu Division that he discovered a sudden and unusual demeanor on his daughter as well as loss of appetite.

“He stated further that this made him to properly question the girl and she informed him that the suspect forcefully had carnal knowledge of her and warned her never to diseclose it to anyone.

On interrogation, the suspect confessed to the crime but blamed it on the devil handiwork. The victim has been taken to the hospital where medical report confirmed that she was penetrated”.