Why did some hate Pablo Picasso’s Chicago sculpture? 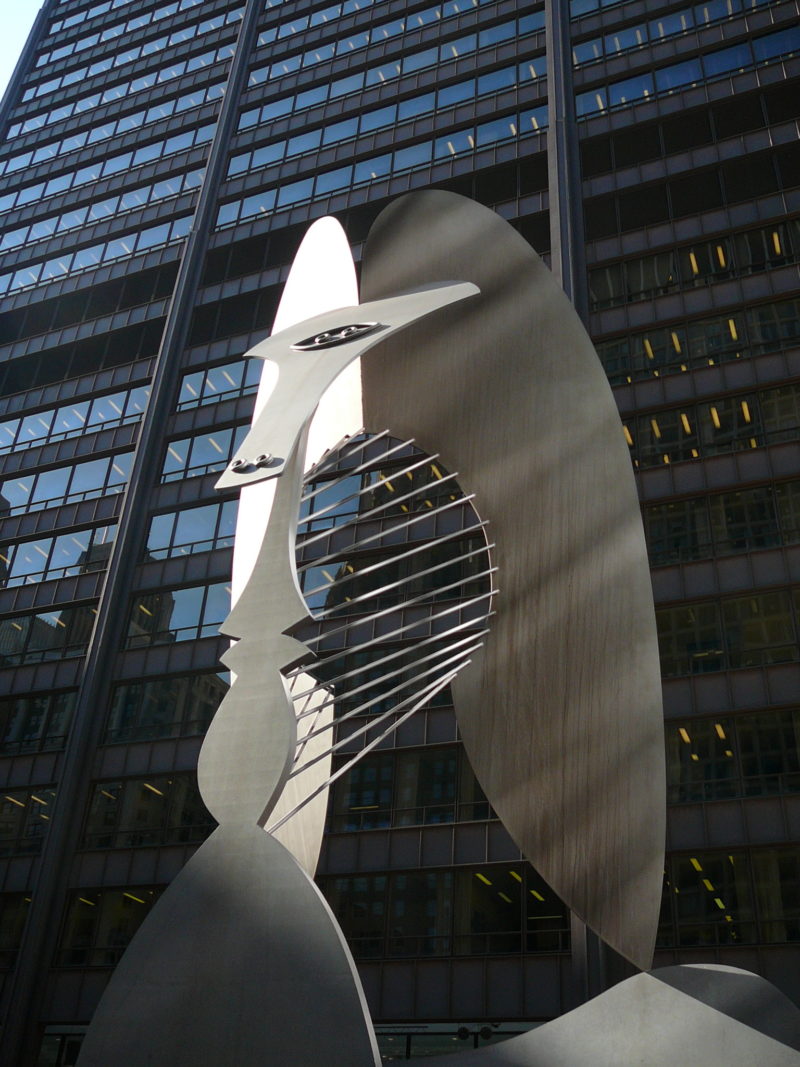 Who was Pablo Picasso?

Pablo Picasso was born in 1881 in Malaga, Spain. His father was a respected art teacher, and because of this, Pablo attended the prestigious Academy in Barcelona when he was just 14 years old. It was here that he painted his first work titled Girl with Bare Feet. After two years at the Academy, Picasso transferred for more advanced teaching. But since it did not hold much of his interest, he found himself spending time in cafes and brothels.

At the age of 26, he started Cubism, at which point he was already a successful painter. He led the evolution of Cubism to escape the oppression of the laws of the tangible world, to fly beyond all the degradations of the lie, the stupidity of criticism, towards that total freedom which inspired his youth.

In his lifetime, Picasso has created over 50,000 works, which were majorly paintings and sculptures. Other works included untitled engravings, illustrations of classical texts, stage sets, ceramics, a play, lithography, as well as two collections of poetry. Picasso was a creative artist, and it was his artistic prowess that enabled him to progress through various periods, including the Blue period between 1900 and 1904 and the Rose period from 1904 to 1906.

Picasso is arguably the most renowned artist of our lifetime and considered one of the greatest artistic minds of all time.

One of his most prominent works is commonly called the Chicago Picasso. The untitled sculpture is located in Chicago, Illinois, United States, and was first presented on 15, 1967, in Daley Plaza in the Chicago Loop.

It stands 50 feet (15.2 meters) tall and weighs 162 short tons (147 t). The Chicago Picasso is a Cubist sculpture, and the first major public sculpture to be installed in Downtown Chicago. Today, the work is one of the most popular landmarks in the city of Chicago.

The Chicago Picasso sculpture is publicly accessible, and it possesses inviting monkey bar characteristics. It is because of these attractive features that visitors can be seen climbing on and sliding down the base of the sculpture. 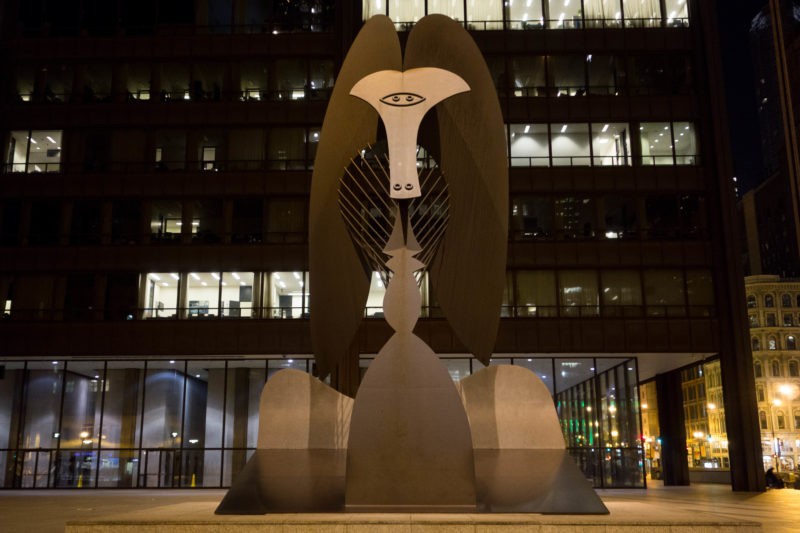 How & when it was created

The Chicago Picasso was commissioned in 1963 by the architects of the Richard J. Daley Center and facilitated by the Architect William Hartmann of Skidmore, Owings & Merrill. The artist completed a rough draft of the sculpture in 1965 and sanctioned a final model of the statue in 1966.

It is believed the work cost $351,959, which is equivalent to $2.7 million today. Charitable foundations, including the Woods Charitable Fund, the Field Foundation of Illinois, and Marion Deering McCormick Foundation, paid this cost. The three charities wanted to pay Picasso $100,000 for his labor and artistic skills, but the artist turned the payment down, stating that he wanted to make his work a gift. The sculpture was built using Cor-Ten steel, a material similar to the one used on the exterior of the Daley Center.

Pablo had an intimate relationship with Chicago, stretching back to 1913 after the Art Institute of Chicago become the first art museum in the United States to feature a work by Pablo. 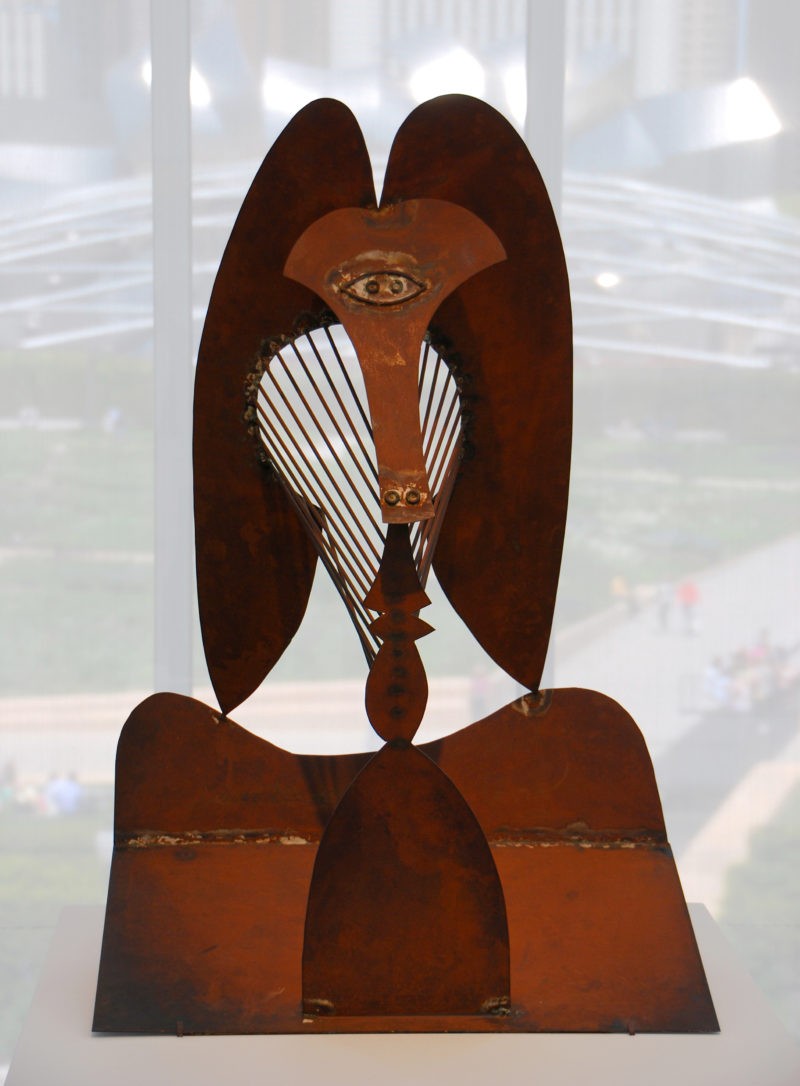 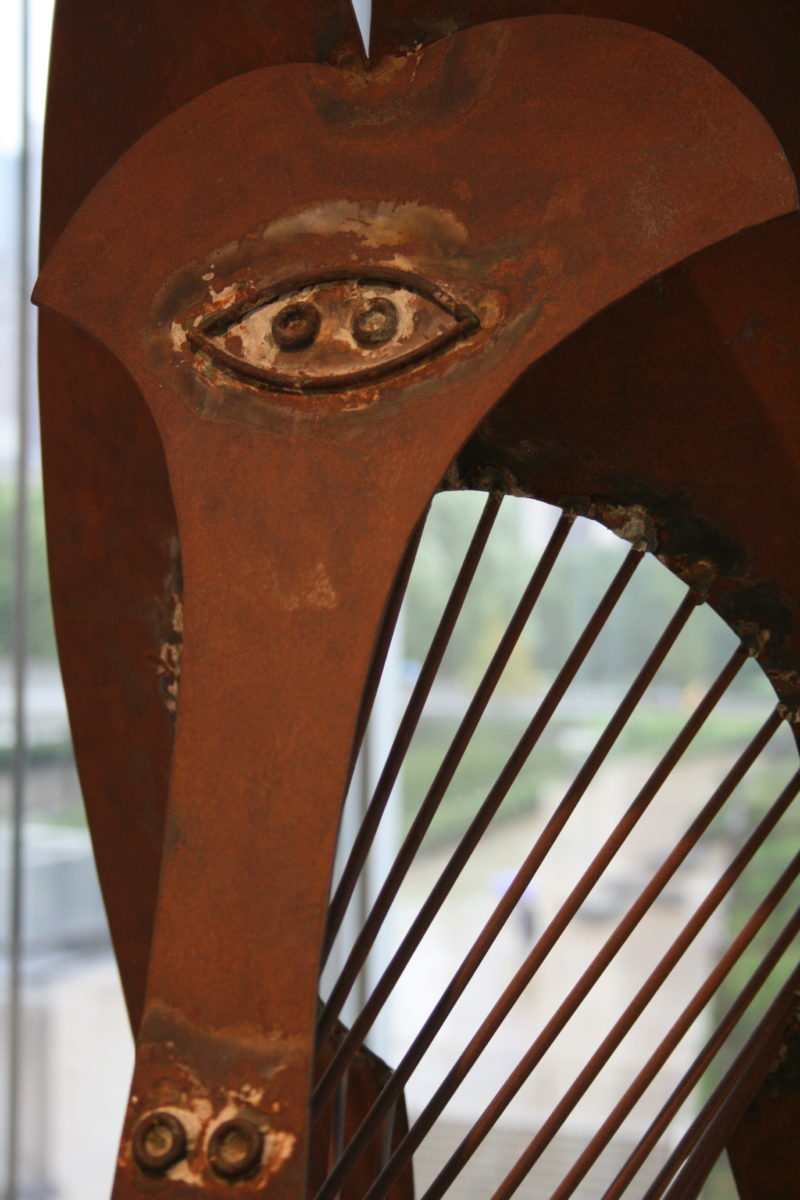 While the sculpture represented some of the essential artistic skills by Picasso, it did not fail to court controversy. The work infuriated and mystified some sections of politics, mostly because of Picasso’s leftist views. Some members of the public were offended by the abstract nature of the sculpture.

In fact, John Hoellen, Chicago City Council alderman, recommended the sculpture be replaced with a statue of baseball player Ernie Banks. The Chicago Tribunal conducted an informal poll of the members of the public passing by the monument, which resulted in shocking comparisons to a flying nun, a baboon, or a cow sticking out its tongue. But as time passed by, the sculpture started to win over the public, and it became a symbol of the city. As no one copyrighted the artwork, its image began to appear on various merchandise and souvenirs.

As soon as you see it turning up on buttons and coffee mugs, it stops being controversial, said public historian Paul Durica. The sculpture even started to appear in films such as Ferris Bueller’s Day Off and Blues Blue Brothers. Soon, children began sliding on the work, making it a de-facto interactive sculpture in Chicago. 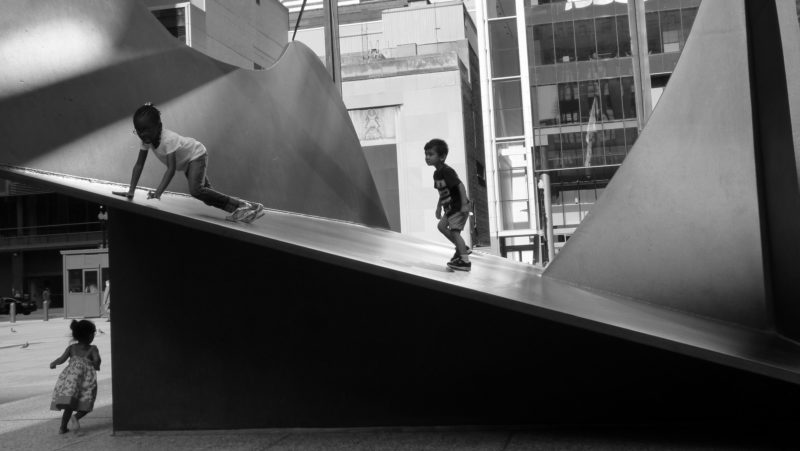 While the sculpture is a massive work of art, still many inhabitants of the city don’t know what it really means other than just being an attraction in front of a plaza. It could have been easier to deduce the meaning behind it, had it had an official name, but Picasso never gave it one; thus the name Picasso or as many Chicagoans called Chicago.

There are many interpretations of the sculpture, even in the art scene. Many observers have come up with their own understanding, including some sort of an animal – an elephant, a horse, a bird, a giraffe, a dog, a lion, or a baboon, which seems to be the most common interpretation. Some have even gone as far as suggesting that it is a violin that has been stroke by lightning.

Eric Keune, design director at Skidmore, Owings & Merrill, stated that the sculpture was majorly inspired by Picasso’s second wife, Jacqueline Roque. According to Keune, viewing the work from a vantage angle may reveal the profile of a woman.

You can really see the profile of her face, and the profile of her lips and chin when you come at it from the back. It is also a combination of her profile – these are derived from sketches that he did – along with their Afghan hound, Kabul.

Others think the sculpture is a long-necked, high-ponytailed woman inspired by Pablo Picasso’s muse Sylvette David, now known as Lydia Corbett. At the time of construction of the work, Corbett was a 19-year-old living in Vallauris, France. She would often accompany her artist boyfriend as he supplied chairs made from wood, metal, and rope. At one time, the boyfriend delivered the chairs to Picasso, who was amazed by Corbett’s long neck and high ponytail. Since then, Picasso made many portraits of her. At the time, most people thought he was drawing the actress Brigitte Bardot. But in fact, he was inspired by [Corbett], the artist’s grandson Olivier Widmaier Picasso told the Chicago Sun-Times in 2014. According to the grandson, the Chicago Sculpture was also inspired by Corbett. Picasso went on to create 40 works inspired by Corbett. 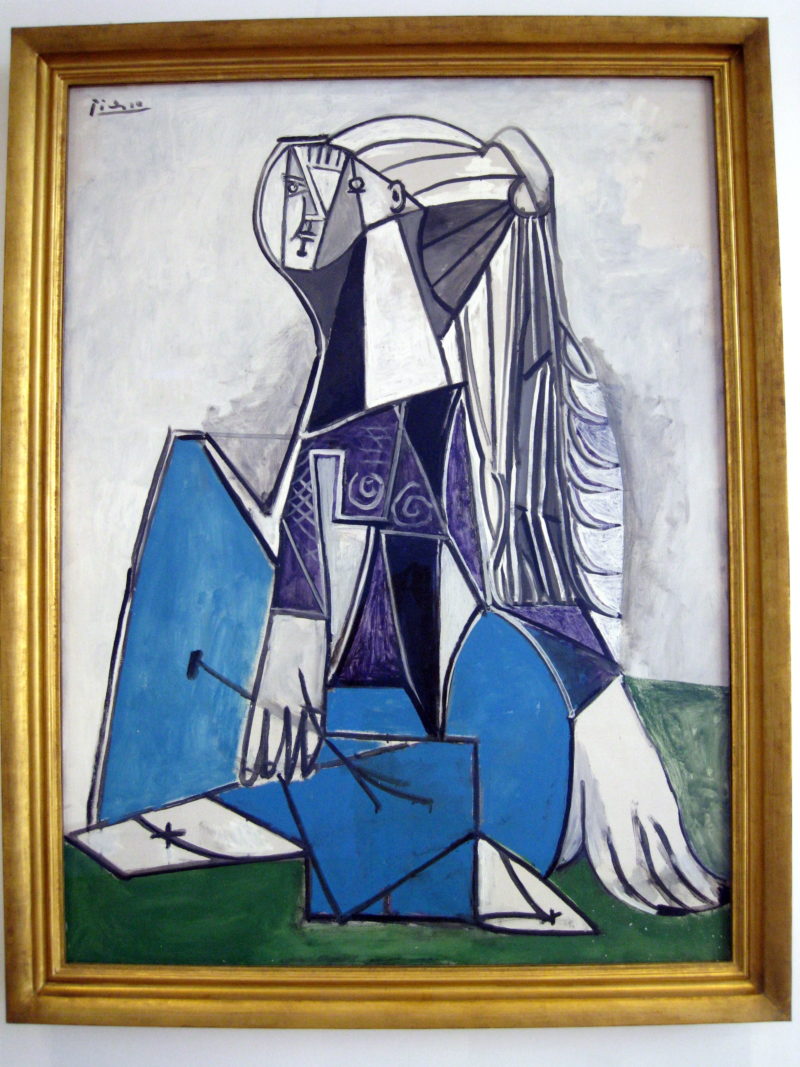 In the 1970s, Jacqueline Picasso told Neil Thomas that the sculpture was actually a male baboon viewed from head-on.

Picasso loved the way the creature changed as you viewed from different angles.

The figure has also been associated with the jackal-headed god, Anubis.
One Col. Jack Reilly, however, was not a fan of the Chicago Picasso. His annoyance wasn’t about the artistic work. He was Chicago’s director of special events and often staged elaborate receptions for visiting luminaries in the Daley Plaza. And with the sculpture taking up much of the space, it seems he had little space left to line up the marching bands as well as military formations. Reilly said in the Chicago Tribune, 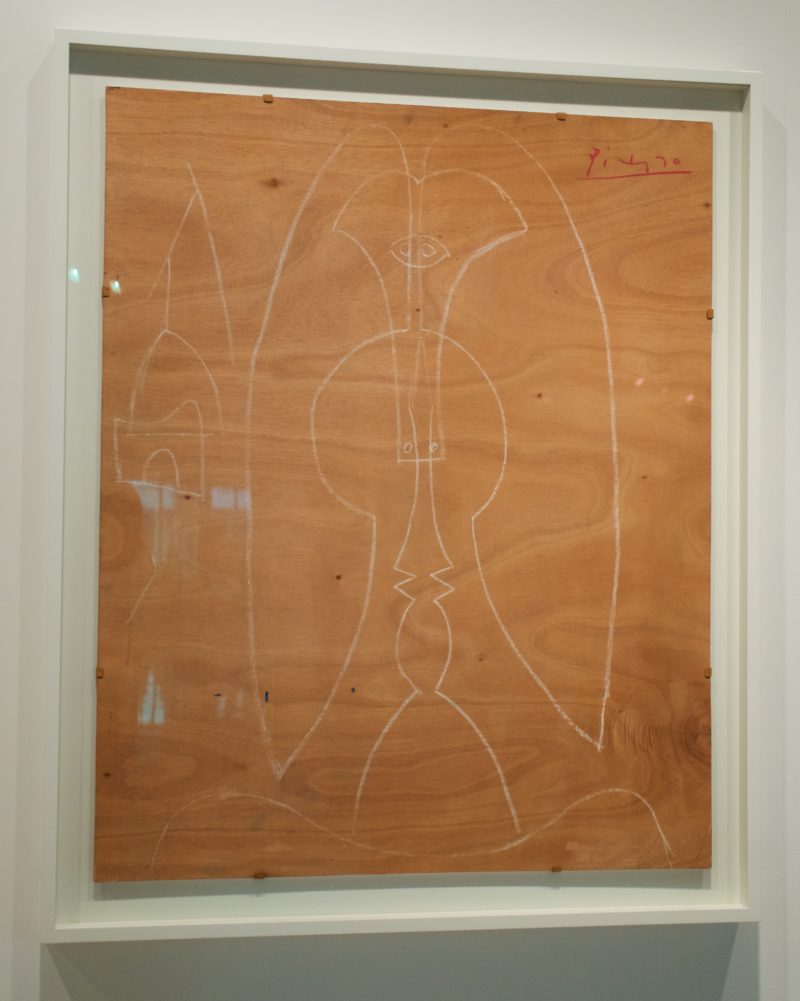 Columnist Mike Royko believed Picasso captured the essence of the city of Chicago:

You’d think he has been riding the L all his Life. Its eyes are like the eyes of every slum owner who made a buck off the small and the weak. And of every building inspector who took a wad from a slum owner.”

But that was before Royko said:

Interesting design, I’m sure. But the fact is, it has a long stupid face and looks like some giant insect that is about to eat a smaller, weaker insect. 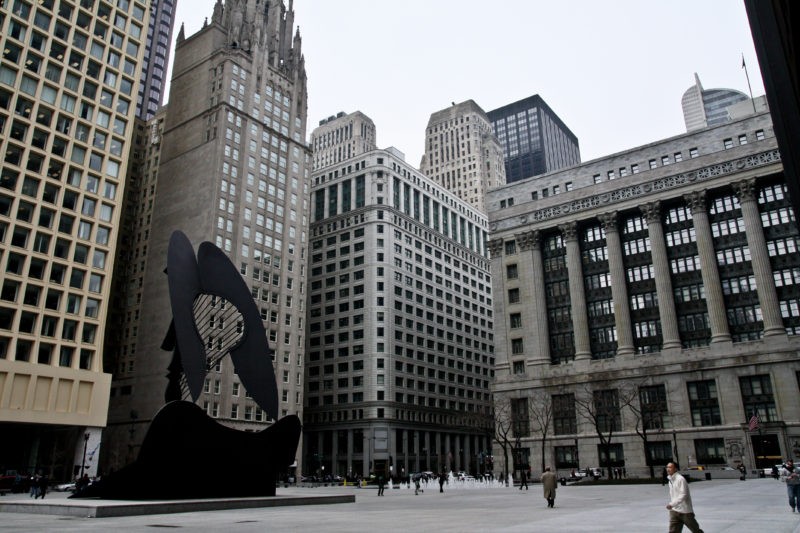 It is, however, correct to say that Picasso’s politics inflamed the debate about the virtue of the sculpture. One Tribune contributor denounced it and termed as a so-called statue donated by the card-carrying Communist, Picasso.

Pablo Picasso had enlisted to the French Communist Party in 1944, just a few years before he created the Dove of Peace – an emblem embraced by anti-war activists, more so those who blame the United States more than the Soviet Union for the 1940s cold war.

During the Vietnam War, the United States was divided, with one faction deeply opposed to the country’s involvement while the other supporting it.

Immediately after the Picasso sculpture was unveiled, an antiwar picketer was charged with criminal trespass and disorderly conduct after he refused to quit demonstrating in the plaza.

However, Daley was not fazed by the redbaiting critics of the artist. He said:

Politics we can handle ourselves. Picasso is the best artist in the world and that is what we care about.” 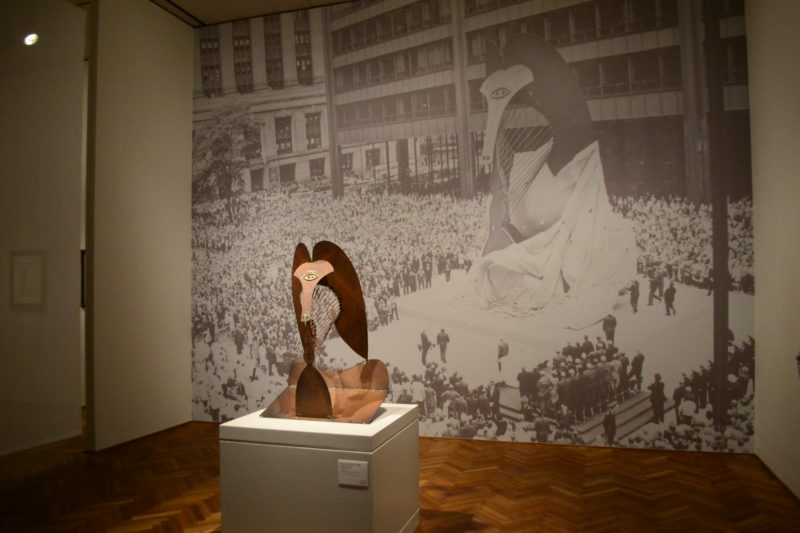 Pablo Picasso – Prototype of Chicago Picasso and an image of the unveiling of the statue, installation view, Art Institute of Chicago, photo: CC BY-NC 2.0 by Emily Barney

Picasso not only tuned down the payment for the work he did in designing the sculpture, but he also refused to sign over copyright. This means the city of Chicago cannot collect licensing fees for the replicas of the statue that proliferated as the work became an iconic monument in Chicago.

However, in 1970, a federal judge ruled that since the sculpture was technical a replica of the maquette, it could not be copyrighted. This was good news for many, as the work was reproduced numerous times. Some of the copies sold for millions. 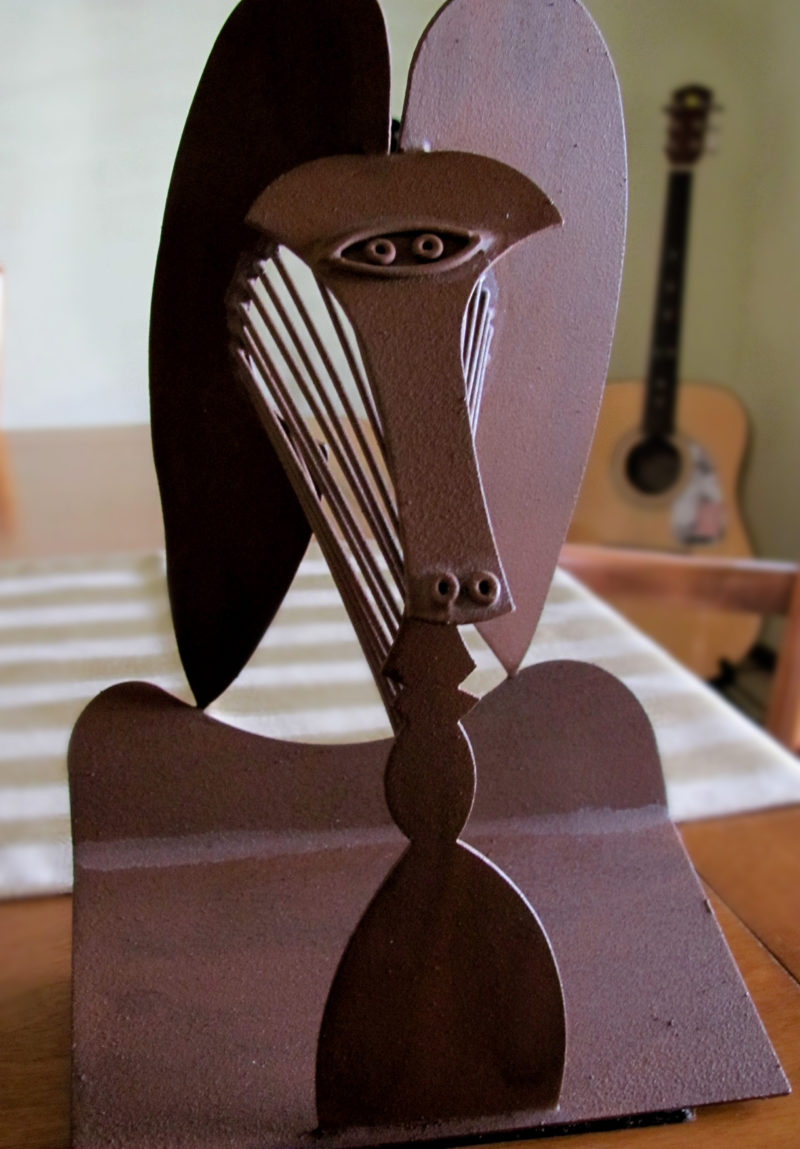 The Chicago Sculpture inspired artists such as Jean Dubuffet, Marc Chagall, and Joan Miro to install their works at prominent sites.

During the 25th anniversary of the sculpture, the city fire marshal Emmet McShane paid a glowing tribute to it, saying:

It was nothing but a big, homely metal thing… Everybody said it had the spirit of Chicago. And from thousands of miles away, accidentally or on purpose, Picasso captured it. 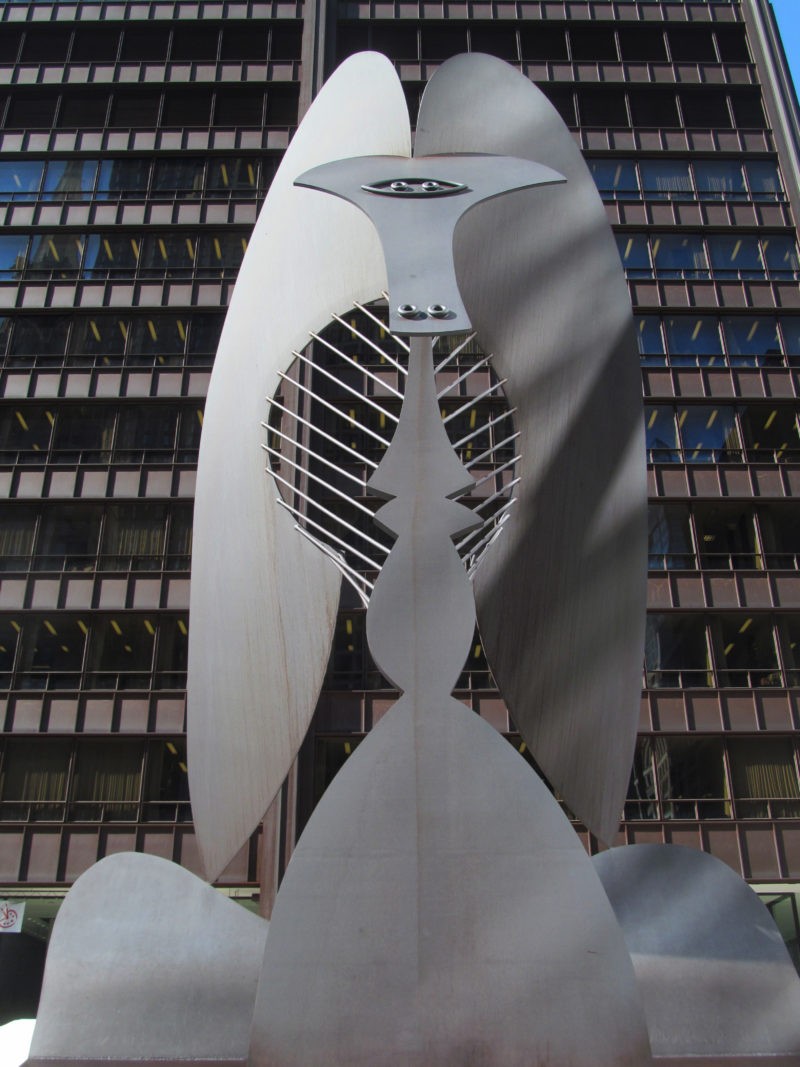 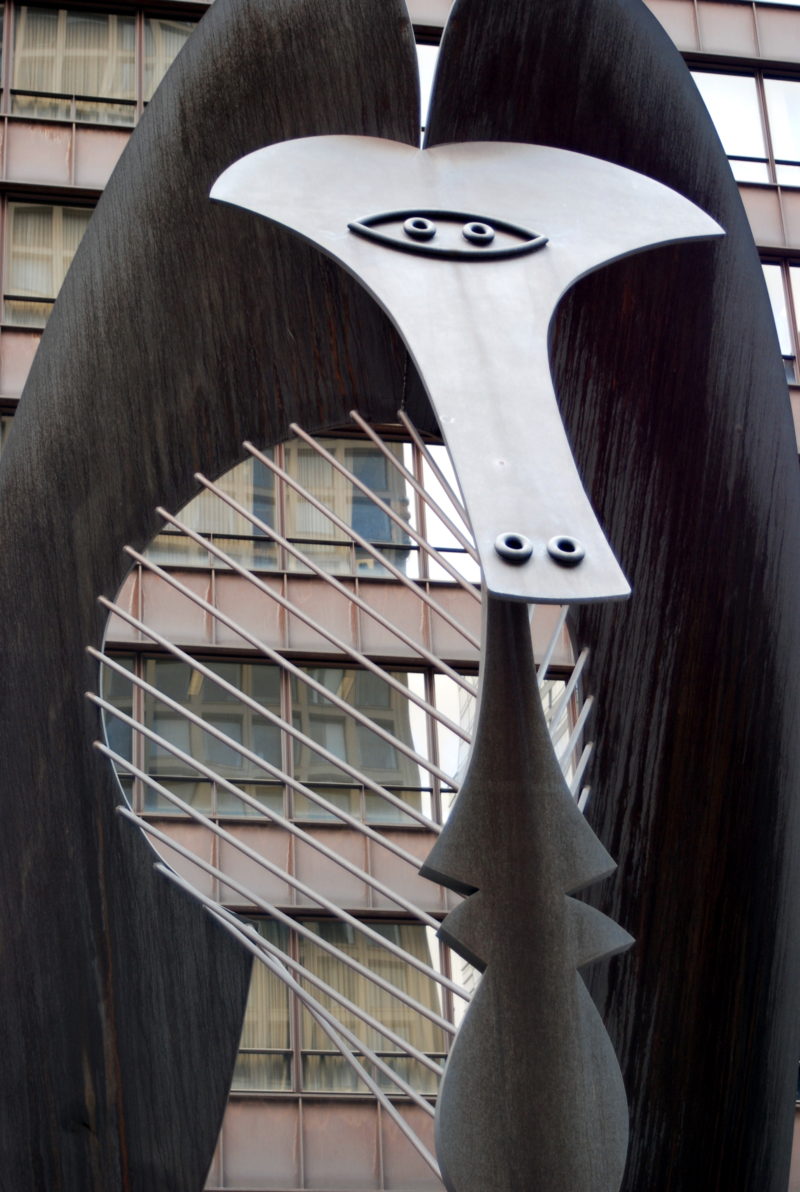 Pablo Picasso himself never visited Chicago, or America for that matter, but he has footprints all over the city. Perhaps the reason why he never visited the city, even during the grand inauguration of the sculpture, is because of his strong opinions about communism. Since it was in the 1940s – the height of the Cold War, he wasn’t allowed in the United States.

During the last stage of his life, Picasso painted nothing except women’s portraits. His final portrait was of his last wife, Jacqueline Rock.

His 90th birthday was his final commemoration and among the highest honors to ever be bestowed upon a living artist. On April 8, 1973, Picasso died aged 92 years. His works are still arguably the most expensive compared with those of other artists of his generation and present. One of his artworks, Algerian Women, was sold for a whopping 179 million USD at the Christie’s auction in 2015.

Today, the Chicago Picasso is one of the most well-known meeting points for many Chicago residents. Depending on the time of the year, you will find musical performances, farmer’s markets, and many other Chicago affairs staged around the sculpture in front of the Daley Plaza. 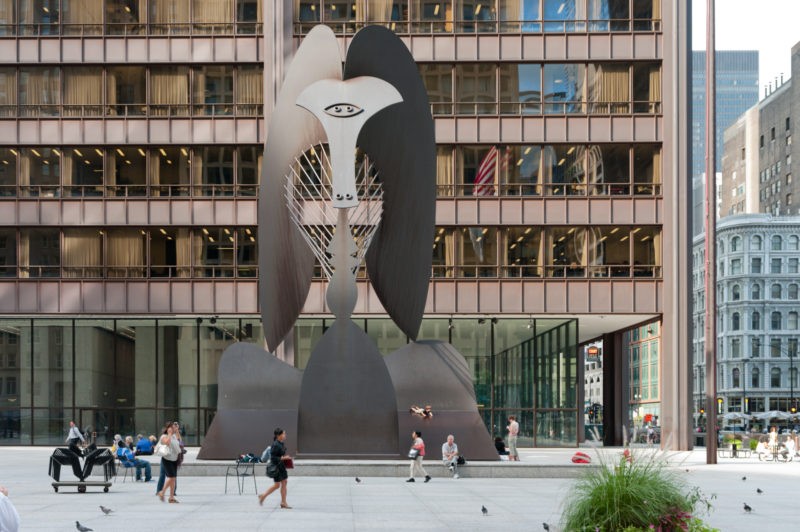 But this does not mean that Chicagoans have finally understood what the sculpture means. While public sculptures are aimed to disprove the preconceived notions of art – and there are plenty of examples even by Pablo Picasso – but the Chicago Picasso might just be one of the most challenging to interpret. 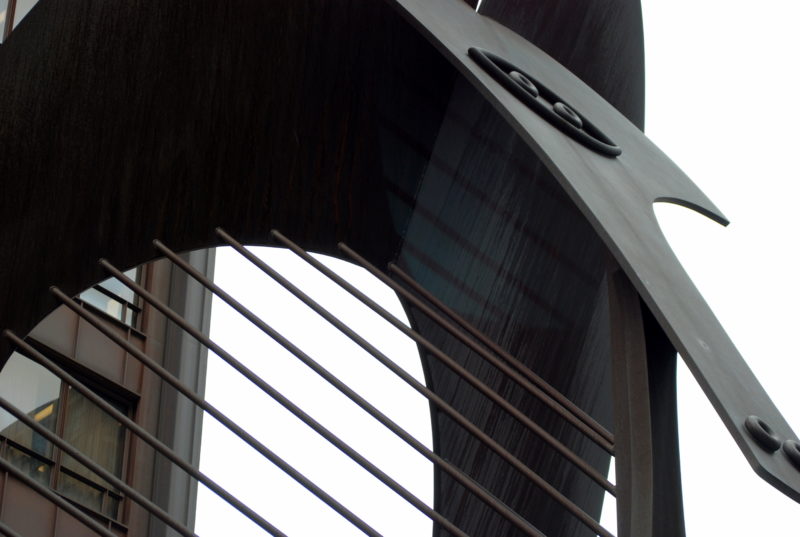 The post Why did some hate Pablo Picasso’s Chicago sculpture? appeared first on Public Delivery.

Why did some hate Pablo Picasso’s Chicago sculpture?