3 Types Of Satire Every Writer Should Know

You vaguely remember the satirical novels your English teachers compelled you to read.

Some stand out more than others — either because they were more fun to read or because their dark humor has clung to your consciousness ever since.

As you’ll see in the examples of Satire listed in this post, most everyone who attended a school can point to a few reasons why the word “satire” gives them mixed feelings.

But what is satire, exactly? And how can you use it to your advantage?

What’s In This Article?
[hide]

Satire is a literary device using irony, overstatement, and other comedic elements to highlight and openly criticize a person, organization, or worldview.

The aim of satire is twofold:

Think of the stories you’ve read that made you laugh and then made you think about something you’d ignored up until then.

If a work of satire inspires you to step outside your comfort zone and do something to make yourself and the world better, it’s done its job.

Three types of satire have thrived over the centuries since their first appearance on the literary scene, each named after the one who made it famous:

Nowadays, it’s not always easy to identify one specific type of satire in someone’s work because so often, two of them are blended into a sort of hybrid.

But the better you know each of the satire types, the more clearly you can identify their elements.

The Roman lyric poet, Horace, exemplified the gentlest kind of satiric humor. What we now call Horatian satire sees its subject as flawed, ridiculous, or in need of self-examination — but not evil.

This satire playfully digs at individuals or groups, along with the attitudes, behavior, or customs for which they’re known.

While humor is a strong motivator, the Horatian satirist is also driven to use their skill with words to change the world for the better.

The most powerful Roman satiric poet, Juvenal, provides an answer to the question, “Does satire have to be funny?”

It doesn’t. Juvenalian satire is biting, angry, and contemptuous toward its subject. It doesn’t aim for humor so much as exposing hypocrisy or corruption.

Unlike Horation satire, Juvenalian sees its subject as not only deserving of criticism but as genuinely evil or corrupt. The bitterness in its tone tends to overwhelm the humor, leaving the reader with either a stomachache or a taste for blood.

The Greek satirist, Menippus, inspired others with his less personal take on satire, which focuses more on mindsets and worldviews rather than a specific human target or misdeed.

It’s still calling people out for things like bigotry and racism, but it does so with less vitriol and without addressing a specific person or group.

The goal here is to call the reader’s attention to societal attitudes and behavior that needs changing.

37 Words of Diction To Use In Your Writing

How To Create An Em Dash Or Hyphen

Parody is often confused with satire, but it’s more accurate to describe parody as one of the elements of satire rather than one of its types.

Think of the question, “What are some satirical techniques?” and parody will often come up, along with irony and sarcasm.

A good example of parody is Saturday Night Live (SNL), which uses exaggeration, farce, and slapstick (physical) humor to get laughs.

The simplest way to differentiate parody from satire is to look at their aims:

Satire is about calling someone out or calling attention to a harmful something, using one or more of its commonly used elements, depending on the reaction the satirist wants.

If a parody is doing this, think of it as a satirical parody or as a parody-based satire.

You can also describe the following as satirical devices. The satirist will make use of one or more of these, depending on their attitude and their aims for the piece.

Once you know what kind of reaction you want to see in your audience, you’ll see more clearly the best satiric elements for the job.

If you’re angry and want to start a revolution, you’ll probably lean toward Juvenalian or Menippean satire.

If you’re only interested in making people laugh (at your expense or someone else’s), Horatian satire and lighter comedic elements will have more appeal.

Now that you know the types of satire and their essential elements, which have you used so far to make a point, get a laugh, or inspire your readers to take action?

Whatever your aims, satire is a tool worth learning to use. Think of the positive changes you want to make in the world and how satiric humor might help in rallying people to your cause.

Decades or even centuries from now, people might reference your book as their chief inspiration. Let it be for something good. 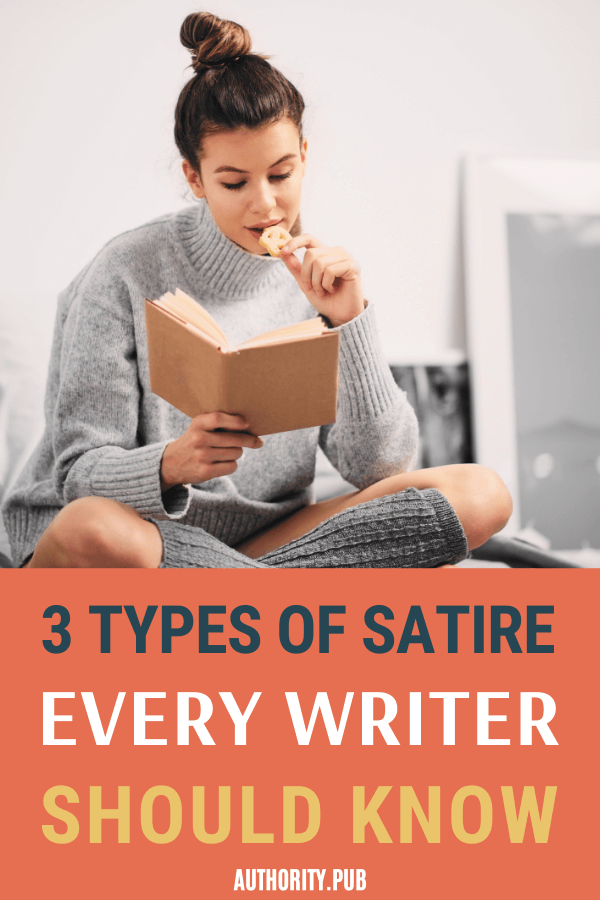 The post 3 Types Of Satire Every Writer Should Know appeared first on Authority Self-Publishing.

3 Types Of Satire Every Writer Should Know