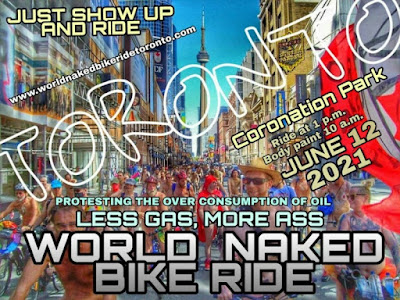 Covid rolls on and so will the World Naked Bike Ride (WNBR) as the two-wheeled protest against car culture returns to Toronto on June 12, 2021. One of Toronto's favourite events has a multitude of nude people bicycle or rollerblade through the downtown core, past some of the city's iconic sightseeing attractions, all the while crowds of people are split between cheering on the riders or taking photos and videos of the unusual sight. Here are some pictures from previous Toronto WNBR rides. 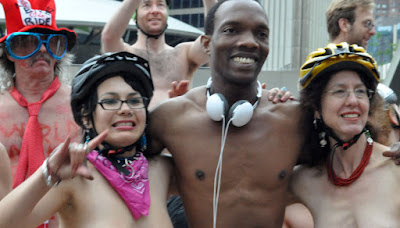 Stopping at the reflecting pond in Nathan Phillips Square

The annual World Naked Bike Ride has been a global tradition since 2004 with a "bare as you dare" dress code that has taken place in a few cities across Canada - including Guelph, London and Winnipeg. The following cities were committed to the ride in 2020; Edmonton, Halifax, Montreal, Toronto, Vancouver and Victoria. For 2021 both Toronto and Montreal are a confirmed go. Montreal has both a day and a night ride. 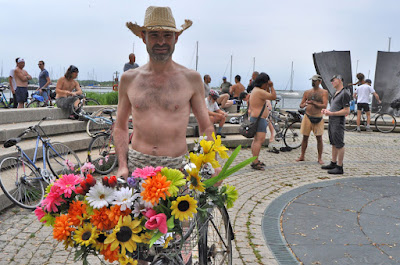 The crowd begins to gather at Coronation Park 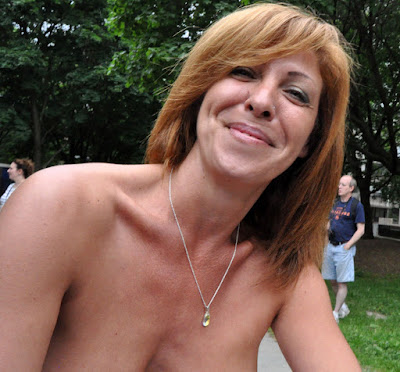 Last year's WNBR Toronto 2020 was initially postponed as the impact of the Coronavirus continued to expand. However, just a few weeks from the original date the ride was scheduled to take place on June 20. The ride was a little smaller than previous years due to the whole coronavirus and the postponement, however with Toronto's 2021 commitment and the return to the traditional second Saturday in June should bring more people back to the ride.

Gene Dare, co-organizer of the Toronto ride, made some changes to the preparations to allow from more social distancing including asking the riders to wear masks. In addition to the protest against car culture and the resulting pollution and greenhouse gases the other reasons for the ride is to celebrate a cleaner and safer world in a body-positive manner. 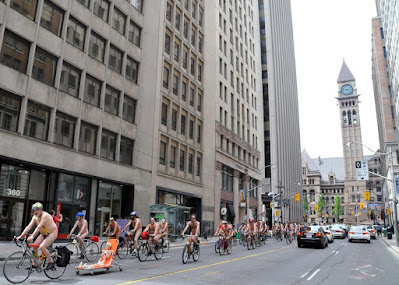 Making their way down Bay Street into the financial district 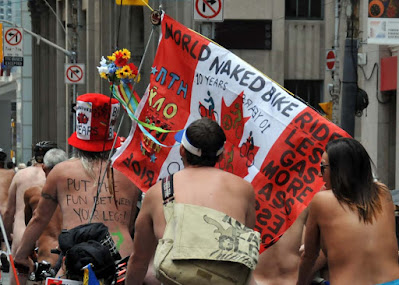 Gene Dare in the red hat with the big Canadian flag 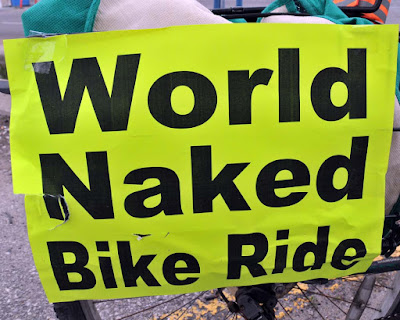 So on Saturday, June 12, 2021 riders, fans and photographers will gather at Coronation Park from 10am to prep for the race, put on some body paint, pose for photos and apply some liberal amounts of sunscreen on all the exposed skin. Then around 1pm the ride will take to the streets of Toronto shouting things like "less gas, more ass"! After seeing the WNBR roll past, some bystanders take off their clothes and join the ride for the first time.

Coronation Park is at 711 Lake Shore Boulevard West, just south of the Princes' Gates at Exhibition Place and the start point is the veteran's memorial in the centre of the park. Overall the ride takes about 2-3 hours and includes stops at Queen's Park, Allan Gardens and City Hall for photo opportunities. Other famous landmarks and areas that the ride passes by include Trinity Bellwood Park, Kensington Market, University of Toronto, Yorkville, Church St, Ryerson University, the Eaton Centre and Union Station. Bicyclists can join or leave the ride anytime they want, however many stop at the Jack Layton Memorial Ferry Docks. Some travel on the ferry to the clothing optional beach at Hanlan's Point and some return back to Coronation Park.