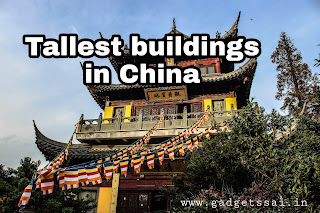 Shanghai Tower is a 128-story, 632-meter-tall megatall skyscraper in Lujiazui, Pudong, Shanghai. It is the world's second-tallest building by height to architectural top and it shares the record of having the world's highest observation deck within a building or structure at 562 m.

The Guangzhou Chow Tai Fook Finance Centre (also called East Tower) is a 530-metre (1,739 ft) tall mixed-use skyscraper in Guangzhou, Guangdong, which was completed in October 2016. It is the tallest completed building in Guangzhou, the third-tallest in China, and the seventh-tallest in the world. The Guangzhou CTF Finance Centre has a total of 111 above ground and five below ground floors and houses a shopping mall, offices, apartments, and a hotel. The skyscraper has a gross floor area of 507,681.0 m2 (5,464,633 sq ft), of which a little over 20% is not part of the skyscraper itself, but of the podium connected to it.

CITIC Tower is a supertall skyscraper in the Central Business District of Beijing. It is popularly known as China Zun (Chinese: 中国尊; pinyin: Zhōngguó Zūn and IPA pronunciation [ʈʂʊ́ŋ.kwǒ.tswə́n]). The 109-storey, 528 m (1,732 ft) building is the tallest in the city, surpassing that of the China World Trade Center Tower III by 190 metres.[2] On August 18, 2016, CITIC Tower surpassed China World Trade Center Tower III in height, becoming Beijing's tallest building.[3] The tower structurally topped out on July 9, 2017,[4] fully topped out on August 18, 2017, and was completed in late 2018 making CITIC Tower the tallest completed building of 2018.[5]

The Shanghai World Financial Center (SWFC; Chinese: 上海环球金融中心) is a supertall skyscraper located in the Pudong district of Shanghai. It was designed by Kohn Pedersen Fox and developed by the Mori Building Company, with Leslie E. Robertson Associates as its structural engineer and China State Construction Engineering Corp and Shanghai Construction (Group) General Co. as its main contractor. It is a mixed-use skyscraper, consisting of offices, hotels, conference rooms, observation decks, and ground-floor shopping malls. Park Hyatt Shanghai is the tower's hotel component, comprising 174 rooms and suites occupying the 79th to the 93rd floors, which at the time of completion was the highest hotel in the world. It is now the third-highest hotel in the world after the Ritz-Carlton, Hong Kong, which occupies floors 102 to 118 of the International Commerce Centre.[6]

Zifeng Tower (Greenland Center-Zifeng Tower or Greenland Square Zifeng Tower, formerly Nanjing Greenland Financial Center)[3][4] is a 450-meter (1,480 ft) supertall skyscraper (special class of skyscraper) in Nanjing, Jiangsu. The 89-story building completed in 2010 comprises retail and office space up to floor 41. Floors 49–71 feature a hotel, numerous restaurants, and a public observatory on the 72-floor. The tower's stepping is functional; office, hotel, and retail are located above grade, while the restaurants and the public observatory are housed at the top of the tower.[3] The building is currently the tallest in Nanjing and Jiangsu province, the eleventh tallest in China and the twentieth tallest in the world.

You can also find