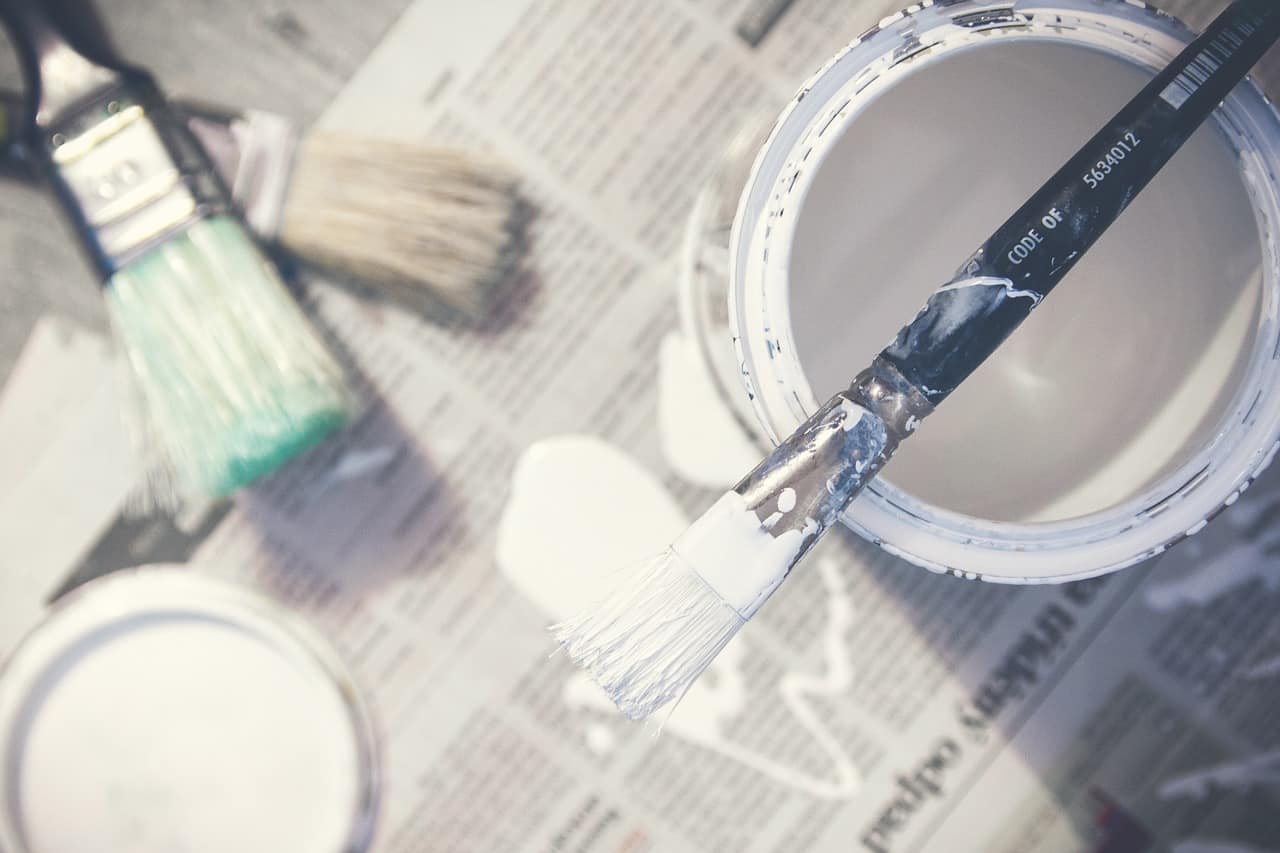 “Christ – look at my keyboard!”

I look and indeed the man’s entire computer – his whole room has been invaded by the dust from my sanding.

I am offended. It is not my fault that there is no bedroom door to close to keep the drywall sanding-dust out. No, not my fault, and to tell the truth I’d just as soon not have this job anyway. Had I been told the circumstances I would not have taken it. “Just a small job,” Dave had said. Dave: carpenter / plumber / drywall installer – but not a painter – and who I subcontract to on occasion. “A small bathroom – sink and toilet only -Paint it in half a day.” Two things, however, that he neglected to tell me when he called: (1) that he hadn’t sanded the drywall joints (and which I have to before I can prime and overcoat) and (2) that the man he had built the bathroom for has terminal lung cancer.

There he lays, in the door-less bedroom, angered by my sanding dust – obviously in what’s-her-name’s anger stage of dying. Not the disbelief stage, not the final acceptance stage – no – this is pure anger. What to do? I haven’t really looked at him since Dave left and laid the terminal thing on me. I’d simply come inside, saw the sanding I had to do, silently cursed Dave and went at it. The man’s wife is at work, his daughter is at school, his young son is next door at the neighbour’s. Hank, the sick man, is alone. All this too from Dave (so full of late information). What to do?

I ease up on the sanding and look around. Yes, it is a small job – and yes I can probably do it in a day. As I look in at him it becomes apparent what is going on. Hank’s bed is a hospital bed, in which his skinny body lies. He’s all cranked up like a big, wounded grasshopper, arms and legs akimbo and buggy-eyed. But it is a posture that allows him to use his laptop, the screen of which, I see, he is scanning intently. It would seem he still has some time left – such vigour in his typing (is he searching the Internet for miracle cures?). And the new bathroom – it had to be installed because his strength isn’t enough to get him to the main one upstairs. So this bathroom, the one that Dave has built tucked under the hall staircase – tiny – but a good solution. But why no doors? Right – the bathroom is so small a door would hinder my painting – part of me will have to be in the hall while I work – Dave will have to hang a door as a final step once I’m finished. But his bedroom door? Aha! There’s been one, I can see the empty hinges. And yes, down the hall, there it is – standing heavy and ancient and propped up against the wall and looking for all the world like it wants to leave. Who could blame it? It has been removed, of course, so as to get the bulky hospital bed in (and out – who’s idea not to replace the door? – his?).

So the bedroom is open – open to my dust. And open to my eyes, too. I look at him. Younger than me? Maybe; it’s difficult to tell due to his grasshopperness. He has now abandoned his typing and is asleep. Perhaps. Again, it is difficult to tell. All his limbs are askew and scattered beneath a white sheet. His chest rises and falls (though in unnatural dimensions) and though there is a definite rhythm to his breathing: a gurgle followed by a thud – ‘gurgle, thud, gurgle, thud’ – at times he gasps in desperation, trying to break the rhythm. How many steps are there? Five? Two to go? I finish the sanding, wipe the little bathroom clean and proceed to paint it.

The house-painting occupation allows for idle thoughts. And speculation too – who has chosen this paint colour: blue – baby-blue – that pale blue it’s almost not blue? Him? The wife? Dave? What would my choice have been, had it been me? ‘Whatever’ – seems the only logical answer. But what if this is: ‘Early-Anger Step 3A’? I think there might have been more than a resigned: ‘whatever’ from him. Maybe this:

Hank: “What the fuck’s it matter? Same as my coffin. You decide.”

School is out and the daughter (about ten) has brought her brother (about four) home from the neighbour’s. And yes, I’d say Andy has definitely pooped his pants. I am crouched painting under the new sink when he bolts by me. Hank, panting, crawls out of his death-bed.

“Andy let me change you – or you’ll get all rashed up like before. Come here!”

Hank is unsteady on his feet but is able to get a bathrobe on and using the furniture for support manages to get to the kitchen – to where Andy has unsuccessfully escaped. I peek around the corner and there is Andy kicking and screaming, his sister sitting on him in triumph.

“NO!” Andy protests yet again.

But his sister holds him fast and between the two of them they get a whimpering Andy undressed and washed in the kitchen sink. He sobs defeated, and when released, streaks wet and naked up the stairs glaring at me as he goes by with such hatred I have to stop and set my brush aside. BANG! His bedroom door. And as Hank shuffles back to bed, breathless and heaving it becomes all too clear. Chemo has made his bony skull completely hairless, no appetite has made his body bony-gaunt, no sun has made him the palest white – cancer has made him a walking cadaver. And Andy does not know who this man is. His father has gone somewhere else – replaced by a ghoul. And he is absolutely terrified of him.

The daughter is watching me paint. Hank is collapsed in his bed and is asleep. Perhaps.

“Nine – Andy’s only four. Do you paint whole houses?”

“I wish we’d paint this whole house – but it’s just here for now, Mum says. Maybe after you could paint the whole house.”

“I gotta go. Make sure Andy’s calmed down before Mum gets home. See ya!” 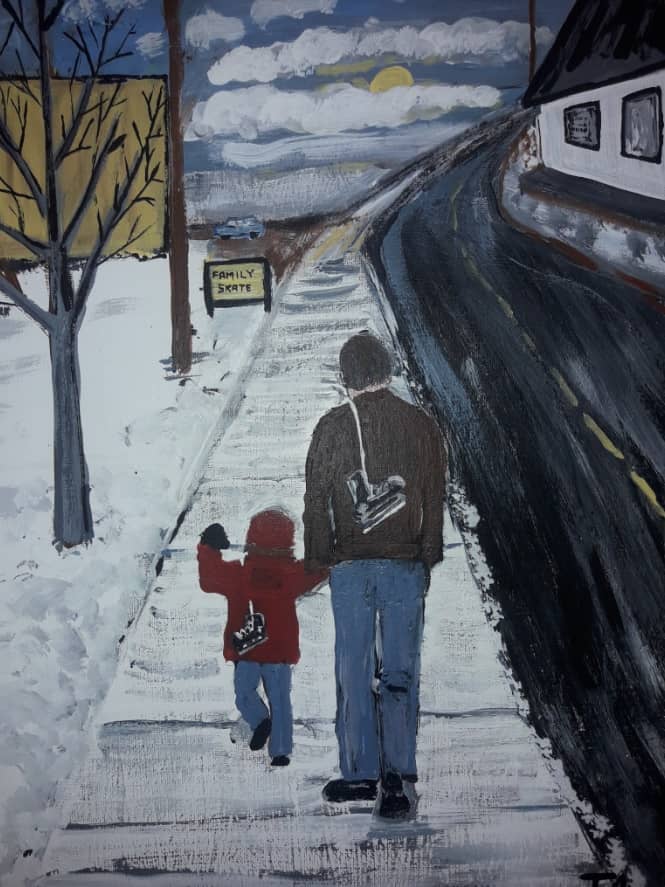 Edward Cloney: “This is a painting that I had my nephew, a hobbyist artist paint for me. I suggested the subject to reflect a happier ending to the story.”

She flits away. I glance over at Hank. Not sleeping. Heard every word. His hollow eyes stare into the empty wall.

Time goes fast in the house-painting trade. It is coming on four o’clock now and I am almost finished. It has been a tough one – the actual work – because of the confined space.

Had the new bathroom been twice the size, I’d been able to paint it in half the time. I finish up and take my gear out to the truck. Dave has told me to give my bill to the wife, who gets off work at four-thirty and would be coming home then. But I don’t want to meet the wife. Three has been enough. I sit in my cab. Should I wait for her? No! This is a horrible, horrible thing and I’ve had enough of it. I do not want to meet her. Coward. I look at my watch. Four-twenty.

I want to flee this house – and yet – I don’t. And I don’t know why. All three of them total strangers but somehow I feel I’ve known them for a very long time. Tomorrow, I decide – I’ll come back tomorrow. Quickly I go back in and inspect my work: the tiny, baby-blue-walled bathroom, the small square of white-tiled ceiling, the gleaming white fixtures. No mirror. Hank is still staring at the wall. The kids are running about upstairs. Rapidly I remove the baseboards and prop them in a corner. And I leave a note on the kitchen table: ‘Will be back in the morning to install the baseboards, total bill is $140 (incl. tax)’. I leave.

Ten o’clock the next morning I return. There is a strange car in the driveway and inside the house Carol greets me. She is the palliative care nurse and just finished whatever it was she has done for Hank. Whatever she has given him. He looks rested, better than yesterday. Calmed.

This is for you I think,” Carol says, pointing to the kitchen table where my cheque is – with a yellow ‘Post-it’ note attached. The note reads: “Great job – thanks!”

I replace the baseboards. And I’ve made up my mind to apologize to him for any mess I’ve made.  I want to speak to him. But I can’t; he is asleep. Perhaps. His eyes are shut at least. Should I try? No; I think it is what he wants. No speaking.

Out in the truck I realize what Hank has done. The note of thanks is not from the wife, as I’d presumed. It is from him. The writing on the note is different from that on the cheque. It is his hand-writing: masculine, shaky, laboured. ‘Great job – thanks!’. He has apologized to me!

And is definitely not sleeping. How do I know? This is how I know: I start the truck and am ready to drive off when Andy comes flying out of the neighbour’s house, a middle-aged woman in tow. He has a pair of skates clutched to his chest. Her skates are in her hand, along with his hat, scarf and mitts. The rink is at the end of the street – they are going skating there. Andy tosses me a quick, happy wave and is gone – more forgiveness!

I look back as I drive away. Hank’s gaunt face is in the narrow, front-door window, peering through it. At what? At his son going skating without him. At his blue-eyed son. His baby-blue-eyed son. 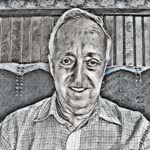 About the Author – Edward Cloney

Edward Cloney is a retired Forester and house painter residing in his hometown of Nova Scotia. His time is now spent backpack travelling and writing. He has a published novel (Oberon Press, Ottawa) and short stories published in Canadian university journals. “Hank” is non-fiction; it occurred some years ago in his house-painting days.
–
Did you like “Hank” by Edward Cloney? Read more non-fiction, like:Lotus
The Vinyl Raincoat
A Reconstructed Life
No Pain, No Gain
In Memoriam