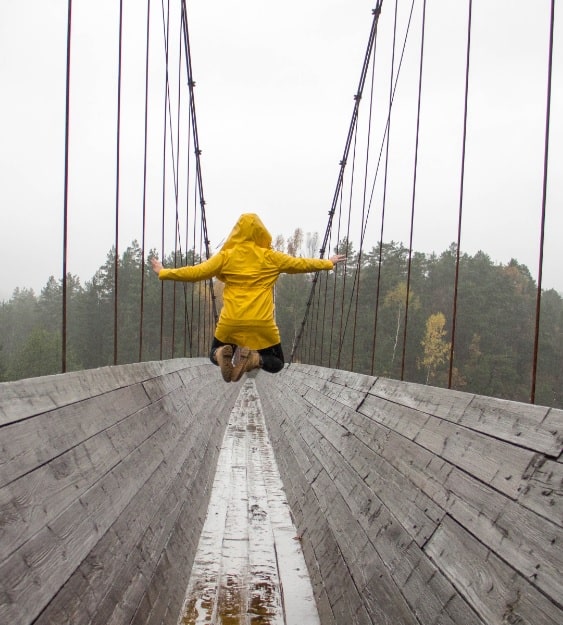 There it was. My mom had tried to preserve it, but the Vinyl was crusty and dried, even though she had stored it in a garment bag inside another larger garment bag loaded with a dozen “important” ensembles, a sort of fabric family history. Mom was so proud of the raincoat I made in eighth grade. Here it was hanging in the attic.

John Denver’s hit single, “Country Roads,” played in the background as I stood at the end of a fashion show runway built by volunteer dads from wood scraps. The crowd of parents waited patiently as Denver’s lyrics blared, “Radio reminds me of my home far away,” and as I struggled to unzip the the bottom layer of my wet-look, sunshine yellow, vinyl, fully lined raincoat to transform it from maxi-length into midi. I hit a snag, but the zipper wasn’t caught. I was just nervous. At home, I’d unzipped this layer like a professional model fifty times. I’d done it perfectly in rehearsal the day before.

Mrs. McManus, the mom who had volunteered to teach us to sew, was speaking into the microphone stretching the story about the creation of my double-breasted raincoat to the parents assembled on metal folding chairs in the new gym. She explained how difficult it was to sew using vinyl because it was thick and because each time the sewing machine needle made a stitch, it also made a permanent hole. In a cloth garment, a seamstress can easily rip out stitches without damage to the fabric, if the seam isn’t quite straight or if it isn’t exactly ⅝ of an inch from the edge of the material throughout the entire garment. My mom and many of her friends sewed all of our clothes, so they knew exactly the level of challenge and difficulty that Mrs. McManus was explaining. Denver’s lyrics continued blaring; the audience remained attentive in spite of the snafu. I was still fighting with the zipper. “Driving down the road I get a feeling that I should have been home yesterday, yesterday-ay-ay.”

It had taken a lot of guts or maybe bravado to choose to sew on vinyl fabric. From the moment I brought home the note, mimeographed with pungent purple ink, stating that the girls of the 1972 graduating class of Holy Family Parish Catholic K-8 School, would be taking Home Ec to learn to cook and sew, my mother was on board. The boys would have health class, while we learned the important skills for life. Mom had already taught me to sew. I wasn’t nearly as good as she, but I was pretty good. I could sew straight seams, read and use patterns, use my body measurements to alter a pattern for a perfect fit, sew sleeves, baste and gather fabric, make buttonholes and hand-stitched, blind hems, and even add interfacing and lining. I had already sewn my own slacks, dresses, shirts, 2-piece bathing suit, curtains, aprons, and even a slipcover for the chair in my bedroom. On the first day of class, Mrs. McManus, a neighbor, who knew my mom, pulled me aside and asked me to think about a challenging project. She said to talk to my mother about it. They had already spoken with each other.

My mom and I delivered our family’s donations to the basement of the Holy Family Church Rectory in New Rochelle, NY, which was attached to the school and had a room in the basement for our Home Ec class with a kitchen and enough tables and chairs to set up all of the borrowed portable sewing machines. Thanks to my mother’s Uncle Lennie, my great uncle, who owned a dress factory in Middletown, NY, my family had tons of fabric, thread, buttons, and zippers to donate to the cause, in addition to lending one of our sewing machines for the semester.

“Country roads, take me home to the place I belong,” Denver’s music played on and Mrs. McManus whispered to one of my friends who had already modeled her creation: hip hugging, herringbone stripe flared jeans with cuffed hems and belt loops for her wide leather belt. I kept my chin slightly down as previously instructed and my mouth, closed in a natural position, even through the distress of struggling with the zipper. I had pretended to walk on a rope, placing one foot directly in front of the other, all the way down the rickety, plywood catwalk that brought me to this spot at the end, where my life was currently flashing before my eyes. I had done everything I was supposed to do, but the zipper wasn’t cooperating. My face was turning red. I was starting to panic. My eyes were no longer focused on something ahead of me. I was now in a full-on battle with the zipper. “Country Roads” was over and someone started a new song, “Just My Imagination,” by the Temptations.

I had chosen to make the coat because it was the one garment I had never made. A fabric coat would be a challenge, but not much of one. To amp up the rigor, I chose a wet look bright Sunshine Yellow Vinyl fabric. Go-go boots were made of shiny wet look vinyl and the plasticy trend was just taking off. I also decided to capitalize on another fad that declared women could wear their hemlines at any length now: mini, midi, or maxi. So that was my white whale for the semester: a wet look sunshine yellow vinyl raincoat with three built in hemlines. I adapted a standard double-breasted trench coat pattern and added the layers that zipped off. I used 2 gigantic zippers. It was very ambitious, but I was determined to do it.

The Temptations were crooning, “But it was just my imagination runnin’ away with me,” and I was beginning to take the line as a personal affront. My dream was too big. I was messing this up. Sue, my friend, with her skinny ribbed turtleneck shirt tucked into her gorgeous trousers was by my side freeing the snag in the zipper. “Every night on my knees I pray, dear Lord, hear my plea,” the lyrics were getting too real.

The vinyl fabric had been difficult to cut, because it was so thick; it was equally difficult to sew. I worked double time. At school in the dim rectory basement decorated with orange and brown owls with giant eyes, we sewed and learned to make cheese logs, pineapple chicken, green goddess dressing, and tried to figure out the ingredients in McDonald’s new secret sauce. At home by the light of a lava lamp in a room painted toothpaste green, I worked right up until bedtime. The entire coat was near completion when I made my only mistake. It was with the first zipper. I was creating a false hem to cover the zipper when my seam got away from me, the one that wasn’t unzipping now in front of all of these people. The line of tiny holes was very visible, even from a distance. I had ruined the coat. I could think of only one solution: give up on the idea of maxi, midi, mini and just turn the coat into a mini. 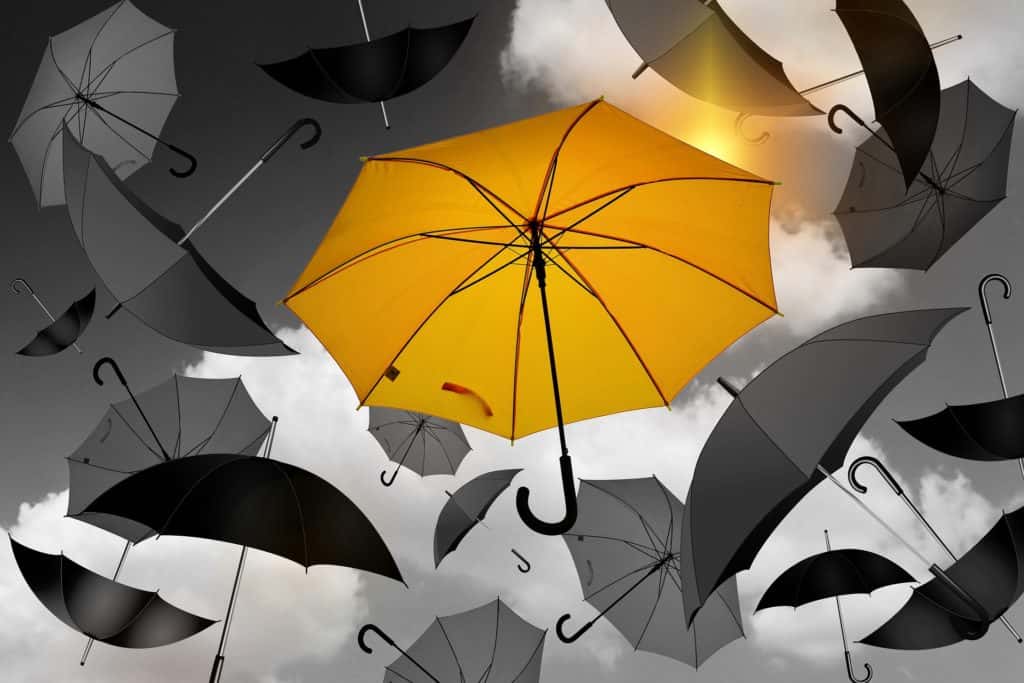 It was my very thrifty mother who suggested the only other solution: we had to replace the fabric, which was no longer on sale. We would have to buy an extra yard and a half at the Singer Store in the New Rochelle Mall. I was surprised at this offer, which was a very expensive solution, and very grateful. I just needed to create a new middle layer. My mom said the coat was a lifetime garment. I would have it forever, because it was so well made. It was fully lined. It had elegant bound buttonholes, welt pockets, silk lining. Everything about the coat was top of the line. Everything that went into the coat from the original vision until its completion demonstrated my drive to achieve great things. It was a life lesson, she said.

Sue stayed to help me unzip the second layer converting the coat into a mini; she gathered up the two unzipped layers and ducked backstage. I did the requisite pivot turn to show off the back of the garment, paused for five seconds as instructed, and walked back down the runway relieved and proud in spite of the mortifying foul-up. The second song was finishing up, “Just my imagination once again runnin’ away with me…”

Cleaning out the attic after the death of both of my parents was tough. Each item—this dried up yellow raincoat, my brother’s boy scout uniforms, my mom’s wedding dress—weighed so much, emotionally. Of course, there was no way to carry these items into my own home to preserve their resonance. So, all I could do was take a photo and stuff the memories into trash bags. And recall. And write.

About the Author – Teresa Sutton 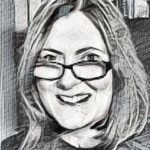 To Hell and Back in Time for Dinner
Gelato and Frost