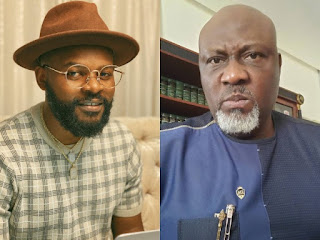 The Endsars protest has generated lots of arguments, these gave revealed some ill treatment by men of Special Ant-Robbery Squad (SARS).
In a new development, popular Nigerian singer, activist and son of renowned lawyer, Folarin Falana known by his stage name as Falz, has slammed ex-senator from Kogi state, Dino Melaye after he showed support for #EndSARS protest.

Sexy Games for Married Couples
How to Attract a Girl in Online Corre…
Top 5+ Best Urgrove Alternative Sites…
“BUY Sqribble? My Honest Review!
Don’t Forget to Brush Your Fur
The senator, (Senator Dino Melaye), SDM as he is known advised the federal government to work with the people or Face revolution.
He also noted that government has no extant power to ban protest as stated in the constitution.
Writing further, the ex-lawmaker, said that the government should realize that the people have woken up from their slumber, as agitation for the end of police brutality and extrajudicial killing gains momentum across the country.
Dino tweeted, “Government have no power in our extant laws to ban protest. So Government must realise that the people have woken up from their slumber. Work with the people or welcome a REVOLUTION. SDM”
Falz who has been an active voice of the ongoing #EndSARS campaign, slammed Dino, warning that the Nigerian youths will soon face his likes.
Falz tweeted, “Oga no dey form like say you dey with us! We go soon face una matter”

Oga no dey form like say you dey with us! We go soon face una matter #ENDSARS https://t.co/OfnUKEF9an