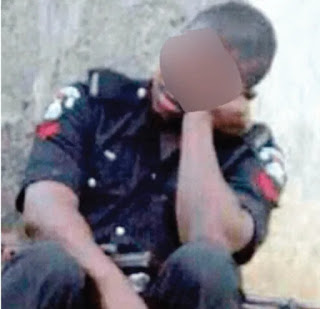 Two sisters, Favor Ajula and Oluchi Ajula were arraigned at an Ikeja Magistrates' Court accused of assaulting a police inspector by tearing his uniform and dragging his gun.

Favour, a 24-year-old hairdresser, snd 18-year-old Oluchi, a nurse, appeared before Magistrate F.F. George on a two-count charge of conspiracy and assault. The duo, who reside at Iju-Ishaga in Agege area of Lagos, however, pleaded not guilty and were granted bail in the sum of N50,000 each with two sureties each in like sum.

The court said the sureties should be gainfully employed and must show evidence of two years tax payment to the Lagos StatevGovernment and adjourned the matter until May 14 for mention.

The prosecutor, Sgt, Godwin Awase, told the  out that the defendants committed the offended on April 13 at their residence. He said the sisters and one Emeka, a teenager assaulted Insp. Bitrus Zingkur, by tearing his uniform and also dragged his servicevgun while performing his lawful duty. Awase said a man went to report to the police that the defendants were after his life.

The prosecutor said the of fence contravened sections 174(b) and 411 of the Criminal Law of Lagos State, 2015(Revised) and Section 174 stipulates three years imprisonment for assault, while Section 411 attracts two years jail term for conspiracy.