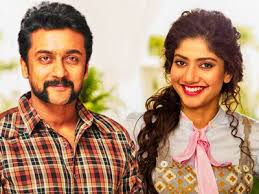 Even if some actresses do not share screen space with Star heroes, heroin stars are fighting to give them tough competition. The beauty of Fidaa, Sai Pallavi, who works with medium-range heroes, tries to take her image to the next level. With the success of Malamalam Premam, Sai Pallavi was already known to many Tollywood audiences. The great success of his first film Telugu Fidaa brought so many offers to this beauty.It is a known fact that Sai Pallavi plays in the Kanam film under the direction of AL Vijay, the director of Kollywood. Recently, she took another big offer from a star director. According to reports, Star hero Surya plays the lead role in the film. Director Selvaraghavan who has created so many blockbuster films as Yuganiki Okkadu, 7 / G Brindavan Colony, Aadavari Matalaku Ardale Verule is leading this project.
Rakul Preet Singh will also play the female lead in this film. The actress confirmed the news while participating in Khakhi promotions. Sources say the characters represented by Rakul and Sai Pallavi are equally important. There is also a rumor that these two beauties are featured in a multistarrer under the leadership of Harish Shankar. If that's true, then these two actresses could become good friends in real life.