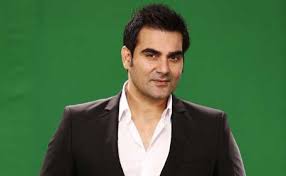 Arbaaz Khan (born August 4, 1967) is an Indian film actor, director, and producer known for his work in Hindi cinema. Since his beginnings in 1996, he has held numerous senior and supporting roles. He ventured into film production in Bollywood, with Arbaaz Khan Productions, launched with Dabangg (2010), in which he played the younger brother role of his real-life brother, Salman Khan. The film has become one of the most profitable Bollywood films of all time. He also won the National Film Award for Best Popular Film providing a healthy entertainment for the same. He also hosted the reality TV show Power Couple, broadcast on Sony TV.
Early life
Khan was born as the second son in a family with close ties to the Bollywood film industry; his father is Salim Khan, a successful screenwriter, and his mother is Sushila Charak, while his mother-in-law is Bollywood dancer and actress Helen. He is the brother of Bollywood actor Salman Khan - with whom he attended Scindia School, Gwalior - and actor-producer Sohail Khan. He has a sister Alvira Khan Agnihotri and a foster sister Arpita Khan. His brother-in-law is actor Atul Agnihotri.

Khan made his debut in the 1996 film Daraar in a villainous role of a psychotic woman drummer. He received the Filmfare Best Villain Award for his performance. Although not a successful actor in his solo films, he has appeared in many hit movies such as Pyaar Kiya to Darna Kya (1998) and Garv: Pride and Honor (2004) where he acted opposite his brother Salman.
He played a villainous role in the film Qayamat: City Under Threat (2003), which was also successful at the box office. He has also played supporting roles in the comedy films Hulchul (2004), Malamaal Weekly (2006) and Bhagam Bhag (2006) by director Priyadarshan. He played supporting roles as a policeman (Constable Javed Shaikh) and a gangster (Moscow Chikna) respectively in the multi-starrers Shootout at Lokhandwala and Fool and Final in 2007. He also did a cameo, with his brother Sohail Khan, in Jaane Tu Ya Jaane blockbuster, with Imran Khan and Genelia D'Souza. In 2009, he played alongside Sohail in Kisaan and played the villain in Jai Veeru. Khan also appeared in the television series Karishma - The Miracles of Destiny in 2003 and has appeared in many television programs from time to time.

Arbaaz Khan with his wife Malaika Arora Khan
Khan married the model and actress Malaika Arora Khan in 1998. They have a son, Arhaan, born in 2002. The couple announced his separation on March 28, 2016. And now they are divorced. 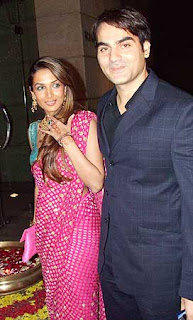 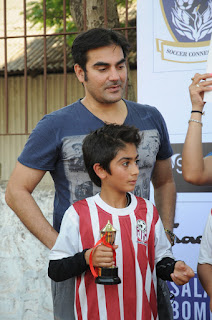 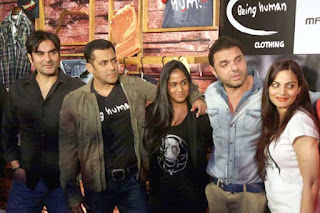