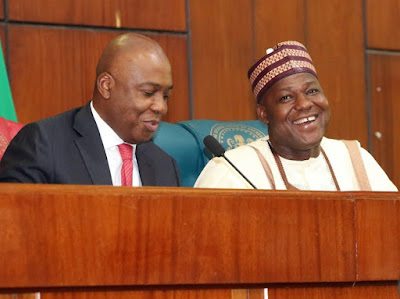 Saraki and Dogara
It has been reported that the President of the Senate, Bukola Saraki; and the Speaker of the House of Representatives, Yakubu Dogara, were on Monday conspicuously absent at a parade organised to commemorate Nigeria’s 58th independence anniversary.


According to Punch Metro, the strictly military event held at the Eagles Square, Abuja, was attended by President Muhammadu Buhari and Vice-President Yemi Osinbajo.

Recall that Saraki and Dogara recently defected from the ruling All Progressives Congress to the opposition Peoples Democratic Party.

Also in attendance at the parade was the Chief Justice of Nigeria, Justice Walter Onnoghen.

On arrival at the venue, Buhari first took the national salute before moving to inspect the parade in a motorcade.

He later returned to the VIP stand to join Osinbajo, Onnoghen, Gowon, Abdulsalami and other dignitaries.

The Most Common Financial Mistakes Made By People Now