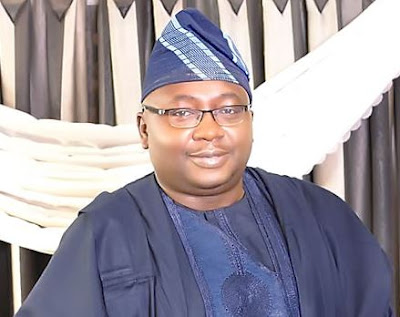 Adebayo Adelabu
The All Progressives Congress in Oyo State on Sunday held its Governorship congress at the Lekan Salami Stadium, Ibadan, with a former Central Bank of Nigeria Deputy Governor, Adebayo Adelabu, emerging after other contestants stepped down for his candidacy.


After the likes of Joseph Tegbe, who was touted as Governor Abiola Ajimobi’s anointed candidate, and other aspirants willingly stepped down from the race, Adeniyi Akintola (SAN) refused to do so as he was adamant on a full primary.

But as the election began, the legal icon announced his withdrawal from the race. Adelabu is the grandson of the Ibadan notable politician, Adegoke Adelabu, popularly known as Penkelemesi (peculiar mess).

A former governor in the state, Adebayo Alao-Akala, on Saturday earlier announced that he would not be part of the primary, saying Governor Ajimobi had perfected strategy to impose Tegbe on the party.

Similarly, the Peoples Democratic Party in Oyo State also held its governorship primary at the Obafemi Awolowo Stadium on Sunday with a businessman, Seyi Makinde, beating other aspirants to clinch the party ticket for the 2019 governorship election.

Makinde beat his closest rival, Senator Ayo Adeseun from Ogbomoso, although the senator in the last assembly left the venue of the primary, citing tampering with the delegates’ list as a reason.

The primary was executed by officials of the Independent National Electoral Commission and the representatives of the PDP from the national secretariat. In his acceptance speech, Makinde said the victory notwithstanding, there was a lot of work for the party ahead of the general elections.

“We know the daunting and challenging work ahead of all of us when, by His Grace, we win the governorship election on March 2, 2019.” “Victory is sweet because, with all sense of humility, I know that we are capable of walking the talk.

We have the ability to solve the myriads of challenges that daily confront our people, particularly the vulnerable citizens whose numbers, as I speak, have continued to increase in frightening proportions, especially in the past seven and a half years.

The plight of these vulnerable citizens will be addressed by our administration. Good governance is putting people at the centre of development,” he said.