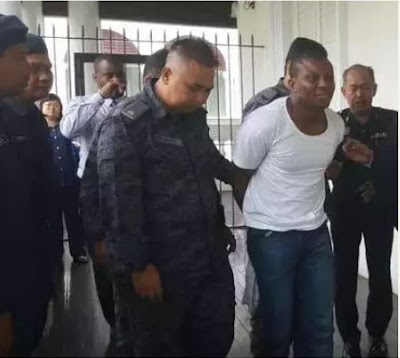 The 35-year--old Nigerian was freed after the prosecution failed to prove that he knew that an unopened parcel contained methamphetamine, known locally as syabu.


Justice Datuk Lim Chong Fong of the High Court in George Town acquitted Joseph Metuh Onyinye, 35, without calling for his defence. He ruled that the prosecution had failed to establish a prima facie case against Onyinye, who was charged with trafficking 1.8kg of syabu.

The Nigerian was charged with committing the offence on Oct 31, 2014, at about 3.10pm at Miami Green Resort Condominium in Batu Ferringhi, Penang.

Report has it that the Nigerian was re-arrested and handcuffed a short while after his release by officers from the Immigration Department as his visa had expired.

He may be bundled into the plane for a journey back to Nigeria, any time soon.