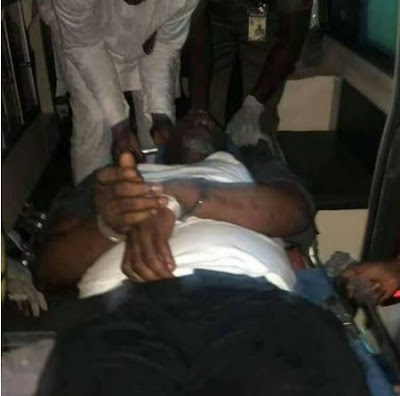 Tweets from the Twitter account of the embattled All Progressives Congress chieftain Dino Melaye stipulate that the dramatic politician who has featured in a music video as well as comical videos might be in distress in an Abuja hospital.


Melaye is presently surrounded by policeman probably waiting to whisk him away for prosecution for running arms as soon as he recovers.

"Melaye is at the intensive care unit of the national hospital. Trauma section."

"Samuel Melaye, Moses Melaye, Pastor Obalemo, my driver Folorunsho, one of my lawyers and 7 others arrested since Mondau by the police still in detention by the police." 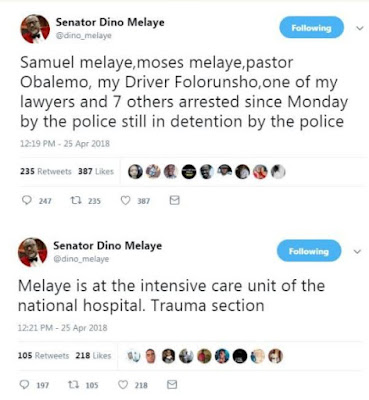 The police have put handcuffs on Senator Dino Melaye who was re-arrested after he jumped off the police vehicle being used to convey him to Lokoja on Tuesday on his hospital bed.

He has been moved to the National Hospital Abuja as at the time of filing in this report.

It was gathered that the doctor at Zankli hospital where he was initially admitted claimed that the senator sustained spinal cord injury.

Police in a statement yesterday said that they would take Dino to Lokoja to appear in court without any further delay.