2019: 'Not Too Young To Run' Bill Scales Through 21 States Assemblies 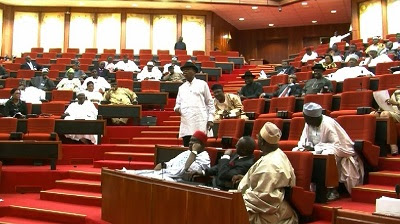 Barely two months after the National Assembly transmitted a bill, tagged ‘not too young to run’ including 15 amendments already carried out on the 1999 Constitution ahead of the 2019 general election, no fewer than 21 state Houses of Assembly have passed the bill.

The Ondo State House of Assembly blazed the trail as it was the first to pass the bill, followed by Adamawa, Benue, Kwara, and Nasarawa Houses of Assembly.


Also, Enugu, Delta, Borno, Ekiti, Katsina, Yobe and Gombe assemblies had followed suit as they passed the bill last year December while Kogi and Kebbi Houses of Assembly passed the ‘not too young to run’ bill January this year.

Addressing journalists in Awka yesterday, the Anambra State coordinator of ‘not too young to run’ movement, Mr. Nonso Orakwe described an alleged refusal by the other fifteen Houses of Assembly to pass the bill as worrisome.

While calling on the lawmakers to do the needful in the interest of democracy, Orakwe explained that members of the movement were driven by compelling need to restructure the country’s political structure in order to address the deeply entrenched system of political exclusion and institute inclusive politics, transformative leadership and electoral competitiveness in the electoral process.

Orakwe said: “These states that have passed the amendment bill have been inaugurated into the ‘not too young to run Hall of Fame’ for voting in line with aspirations of the Nigerian people. By this singular act, the 21 youth friendly states have made history and written their names in gold.

“The passage of the bill is a demonstration of their commitment to the tenets of representative democracy. We commend them for fulfilling their promise to their constituents and the Nigerian youths, who will always remember them for showing leadership in promoting youth inclusion in democratic politics in Nigeria.”


This post first appeared on Ogbeta.org, please read the originial post: here
People also like
Martha Millan Interview: Fiona’s secret on The Cleaning Lady
how to improve vision in 7 days
FTX CEO Sam Bankman-Fried, also known as SBF, will testify before the House…
What to wear: outfit ideas for Christmas & summer
Seven Reasons Why Fast Hosting Servers Are the Way to Go
Karen Wiesner: I Have Dreamed a Little Dream (Authors and Dream Inspiration), Part 2
Best Home Sauna To Stay Warm All Winter

2019: 'Not Too Young To Run' Bill Scales Through 21 States Assemblies