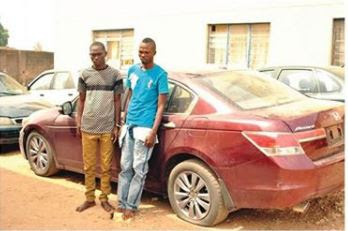 The fake soldiers after they were arrested
Two armed robbers who dressed in Army camouflage to rob one Usman Saidu, a sergeant of the Nigerian Army Guards Brigade, Asokoro in Abuja have been arrested by the police in Niger.

They were also said to have in the past carried out robbery operations and terrorised residents around Zuma Rock area in Madalla, Suleja Council of the state.


The suspects, Peter Ali, 27, and Paul Isyaku, 23, were trailed before being arrested by the Police after robbing the soldier of his car.

It was gathered that the victim was returning from Abuja with his Honda Accord car, with registration number ABJ 647 RP at Zuma Rock area along the Abuja -Kaduna highway when the robbers attacked him and dispossessed him of his car, phone and other valuables.

A report by Guardian revealed that the bandits, numbering six, were wearing Army camouflage uniform to carry out this heinous act. The suspects were said to have come from Maiduguri, Borno State, and permanently stationed themselves on Abuja-Kaduna road, robbing innocent people on a daily basis.

The Command’s Public Relations Officer, Muhammad Abubakar, said Police operatives recovered the car from the suspects. Abubakar added that during investigation, Ali confessed to have conspired with Ishaku to rob the victim.

Ali, in an interview, said they had been operating on the Abuja-Kaduna highway for over five years. Asked why he left his state to come to Abuja -Kaduna axis to rob people, Ali said: “There is nothing in Borno again, the state is deserted, a lot of people are relocating to other states as a result of insurgency.

Armed robbers, like us, find it difficult to operate there. “It is God’s doing that Police will catch us and the time has come. I have no regrets.”