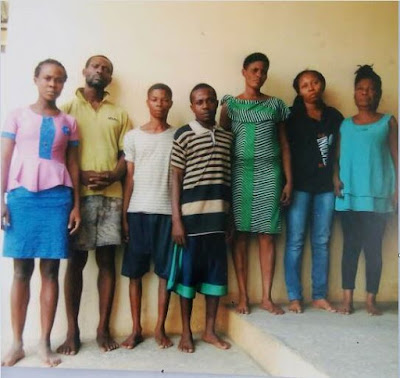 The male and female cultists after they were apprehended in Akwa Ibom state
The Akwa Ibom state police has arrested 16 suspected cult members during their meeting in Uyo.

On the 21st January, 2018, on a tip-off, through a text message received on a suspect’s phone in custody under investigation which read:


“Greetings sir, with due respect the trench town will sit out today @ Hero’s World Hotel, Itu road, by 7pm – Sheriff”.

On the receipt of the information, Operatives from the police command swung into action and cordon the premises of the said Hotel and arrested the following suspects: –

Who are natives of various villages and Local Government Areas of the State. Further investigation revealed that, two suspects detained in the cell received information on their phones, inviting them for the “KLAN KULUS KLUB” (K.K.K) meeting on 21st January, 2018 at Hero’s World Hotel and Bar, located along Ikpa Road by Itu Road, Uyo.

The eighteen (18) suspects arrested in connection to the case confessed being members of “KLAN KULUS KLUB” (K.K.K) and one locally made revolver pistol was recovered.

On 20th January, 2018, through a credible intelligence, one Eno Archibong Emah ‘f’ of ikot Eman Itam in Itu L. G. Area who gave birth to a baby boy on 12th November, 2017 conspired with one Emmanuel Akpabio Okon ‘m’ and Emem Asuquo Okon ‘f’ and sold the one-month old child to one Kate ‘f’ (surname and address unknown) of Aba, Abia State at the cost of four hundred thousand naira (N 400,000.00).

Operatives of Akwa Ibom State Command monitored and promptly arrested the mother of the child who later led the Operatives to the arrest of other accomplices in the illicit trade. They are: Utibe Sunday John ‘m’, Imo Ime Udoetuk ‘m’, Friday John Amiang ‘m’ and Uwana Ime ‘f’ who all confessed to the crime and their individual roles in the offence, including how the proceeds where shared amongst themselves. Culprits were arraigned in court to serve as deterrent to others.

Following an intensive patrol by Operatives of Akwa Ibom State Police Command. On 27th January, 2018 at about 0130hrs, three young men, one Otobong Emmanuel Elijah ‘m’, Amos Cosmos Ukofia ‘m’ and Umoren John Michael ‘m’ all of Uniuyo permanent site, stopped the team along Nwanaiba Road by Stanbic IBTC Bank and informed them that they were robbed at gun point by occupants of one XTERA jeep.

Base on the strength of the information, the team swung into action and gave the robbers in the XTERA jeep a hot chase to IBB road, by Nigerian Christian Institute (NCI) where one of the hoodlums name withheld hang at the door of their vehicle and exchanged firing with the Police, during the incident, sustained gun shot and fell from the vehicle while others drove off.

He was arrested and eighteen thousand, eight hundred and thirty naira (N18,830.00) only was recovered from him. On 31st January, 2018 while on intensive patrol at about 0300hrs, the Nissan XTERA jeep was sighted at Mobil Filling Station, Oron Road by Uruan Street, Uyo with four (4) occupants; one Daniel Ubong Harrison ‘m’, Ekemini Udo Effiom ‘m’, Udeme-Obong Bassey ‘m’, and Joseph Eno Eduok ‘m’ who were the fleeing hoodlums of the said robbery at Nwanaiba, relaxing in the said vehicle, all of them were arrested and recovered one Nissan XTERA JEEP, on instant searched, extra number plate that was used during the robbery operation on the 27th of February, 2018 was recovered in the pigeonhole of the XTERA jeep.

During investigation, suspects confessed to the crime and will soon be charged to court.