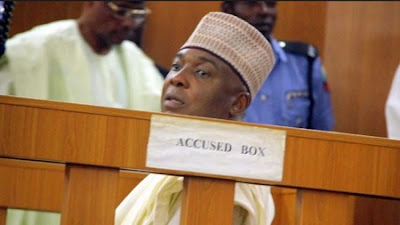 File photo: Bukola Sakari at the CCT
It has been reported that Dr. Bukola Saraki, the Senate President, has arrived the Code of Conduct Tribunal in Abuja for his trial on three charges of false assets declaration.

According to Punch Metro, this followed the December 12, 2017 judgment of the Court of Appeal in Abuja, which restored three out of the entire 18 counts earlier dismissed by the CCT led by Danladi Umar.


Following the judgment of the Court of Appeal, the CCT had issued a hearing notice inviting parties to the case to resume trial on the three charges today (Tuesday). Saraki arrived in the courtroom in company with some senators at 10.5am on Tuesday.

His lawyers and a retinue of his supporters were already seated when he came into the courtroom. His supporters welcomed him with a shout of “Oloye” as many of them approached him to have a handshake with him.

As of 10.33am when this report was filed, the two members ‎of the CCT were being awaited for the proceedings to start.

Meanwhile, the Economic and Financial Crimes Commission had on Friday charged the Chairman of the Code of Conduct Tribunal, Umar, with demanding and receiving favour from a defendant standing trial before the CCT in 2012.

The EFCC, through a private lawyer, Mr. Festus Keyamo, filed the charges against Umar before the High Court of the Federal Capital Territory, Abuja, on Friday.

The prosecution in the case marked, CR/109/18, accused Umar that he demanded N10m as favour from a defendant standing trial before the CCT, Rasheed Owolabi Taiwo, in 2012.

The anti-corruption agency also accused Umar of receiving, through his personal assistant, Alhaji Gambo Abdullahi, the sum of N1.8m from Taiwo in the same year.

The offences were said to be contrary to Section 12(1)(a) & (b) of the Corrupt Practices and Other Related Offences Act, 2003.


This post first appeared on Ogbeta.org, please read the originial post: here
People also like
The BEST Harry Potter Pumpkin Juice Recipe
Cybersecurity secrets that hackers don’t want you to know in 2021
Limitations and Pitfalls of Telemedicine
Sony To Announce New PS Plus Video Pass Service – Free Movies and TV Shows For PS Plus Members
“The Friend Who May Not Seem a Friend” – The Cat and the Fire, Post 2 of 3
My Top Ten Favorite Business Tools for Entrepreneurs
Shay Griffintown, Montréal
It’s Me – Chapter 24