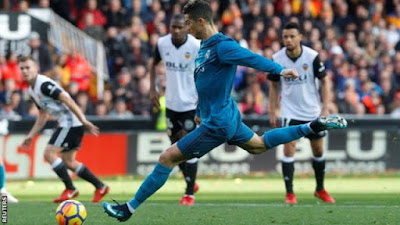 Cristiano Ronaldo scored twice from the penalty spot as Real Madrid saw off Valencia to ease the pressure on boss Zinedine Zidane.

It saw fourth-placed Real close the gap on the hosts to two points, with a game in hand, although they remain 16 points behind La Liga leaders Barcelona.


Ronaldo converted after being fouled in the box and added a second following a push on Karim Benzema before half-time.

Valencia’s Santi Mina pulled one back, before Marcelo added a third for Real. Toni Kroos then put the game beyond the hosts with a superb long-range strike for Zidane’s side one minute from time.

Zidane said he was enduring his “worst moment” as Real coach after the European champions were knocked out of the Copa del Rey by Leganes on Wednesday at the Bernabeu.

The Frenchman also suggested his future at the club depends on whether they can beat Paris St-Germain in the Champions League last-16 next month.