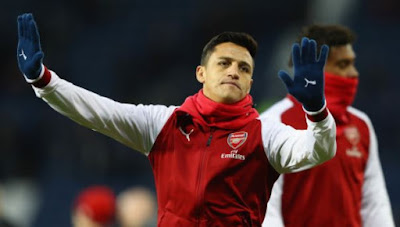 Alexis Sanchez
Manchester United have agreed a deal for Alexis Sanchez which will see Henrikh Mkhitaryan move to Arsenal, claims the Daily Express .

According to the newspaper, Arsenal will receive £40 million for the Chile star, who is out of contract in the summer. Mkhitaryan will move the other way after being frozen out of the Red Devils first team this season.


Jose Mourinho is "relaxed" in the face of reports that Chelsea are planning to hijack Manchester United's approach for Alexis Sanchez.

"Other big clubs are probably interested - who knows?" he told reporters after Monday's 3-0 win against Stoke City.

Manchester United's pursuit of Alexis Sanchez should not come at the expense of Anthony Martial, believes United correspondent Kris Voakes.

Martial was in fine form on Monday as the Red Devils downed Stoke City 3-0 at Old Trafford.