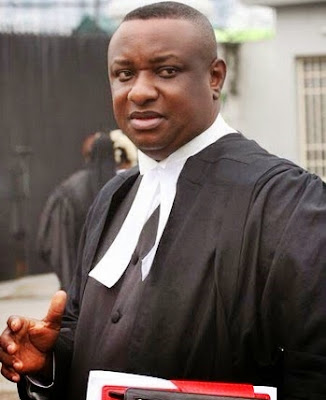 Festus Keyamo
As the 2019 general election draws closer, Festus Keyamo (SAN) called on Nigerians to form a power bloc well suited and ready to take over power from the All Progressives Congress (APC), because the party is not the best option the country has to offer.

The popular human rights lawyer in an interview with SaharaReporters' SaharaTV posited that APC was only used as an instrument to overthrow the ruling People's Democratic Party (PDP). He urged Nigerians to look ahead to another platform that would represent and fight for the interest of the people.


He said, “It is not that we were blind enough to think that everybody in APC were saints or angel coming from heaven, they were core politicians who had soiled their hands in the ruling party and defected just that we needed a platform to push out the former ruling party, PDP.”

“Am I here to think that the APC is the best thing to happen to Nigeria? I will be a fool to say so. Am I here to say that there are no thieves within the APC? I will be a fool to say so. Will I be here to defend APC as the purest political party and the cure to all we have been looking for? No. We need to look forward, we can’t say that we want to go back to where we are coming from, to the era of impunity of open robbery and stealing by the PDP,” he added.

He further asserted that the President Muhammadu Buhari, who is serving as the leader of the party is not the most credible person in the country but Nigerians would need to find someone who is more credible and able to replace him.

Mr. Keyamo keenly advised Nigerians to be calm with the Buhari-led administration pointing that there is yet no platform and party positioned to take over power from APC.

He affirmed that PDP is the party well positioned to move into power if APC is ousted and it would be catastrophic for the country if PDP returns to power.

“Until we get that third force and platform ready that people not satisfied with the ruling of APC can migrate to and begin to fight for the true interest of the people until we get that platform, we are going to play back right into the hands of the PDP.”

“The radicals are not ready for political power, they have not forced themselves into political blocs, if we now participate in a struggle to unseat the status quo, what we will be doing is to campaign for the PDP. Anybody campaigning for change now without being ready to take over power is campaigning for the PDP,” Mr. Keyamo advised.

Moreover, Mr. Keyamo lambasted Nigerians for not supporting neutral faces like Pat Utomi and Tunde Bakare as candidates who sought for political positions but still throw their weights behind known and corrupt people despite their poor governance and the misruling of the country.

“Nigerians do not know what they want, we are calling for change and we are the same people who will mock any new people coming out to contest. At the same time, we abuse and insult the politicians and they are the same ones we expect to run for the presidency as we don’t want to see new faces on the scene.

Even as prominent as Tunde Bakare is, they are still mocking him when he announced his presidential ambition because they feel he is not coming from one of the power blocs,” The human rights lawyer posited.

He urged Nigerians, labour movements and civil society organisations across the country to come together and form a party that will be ready to seize power from the elites and corrupt politicians.