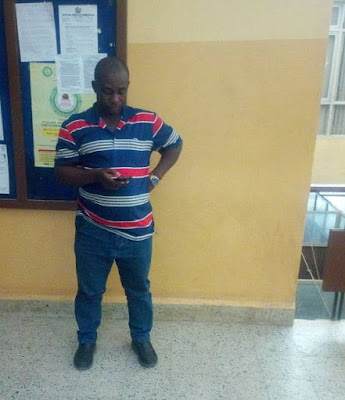 The convict was arraigned by the Commission on December 22, 2016 for allegedly defrauding the complainant the sum of N450,000 (Four Hundred and Fifty Thousand Naira Only) under the pretext of securing job for him.


Upon arraignment, the convict pleaded not guilty which compelled the prosecution counsel Musa Isah to proceed into trial that lasted one year.

In her judgment today, Justice Aboki found the accused person guilty to the one count he was charged with and convicted him as prayed by the prosecution counsel.

After listening to the alocutos from the defence counsel, Amos Ango for mercy on behalf of the convict, Justice Aboki subsequently sentenced the convict to 9 months imprisonment with option of N100,000 (One Hundred Thousand Naira Only) fine.

The convict was also ordered to restitute the sum of N370,000 to the complainant or spend 18 additional month in prison if he defaulted.


This post first appeared on Ogbeta.org, please read the originial post: here
People also like
Why Furries Make Excellent Hackers
7 Reasons Why You Should Hire A Female Divorce Attorney
An Officer and a Spy
Fund for a Sustainable Civil Society
“The Friend Who May Not Seem a Friend”: The Cat and the Fire, Part 1 of 3
Vanmoof Berlin