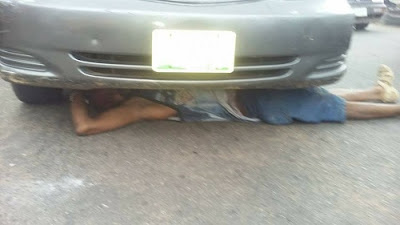 Scene of a car accident (File photo)
Seven people are reported to have died in an auto crash on the Sagamu-Benin expressway on Saturday, according to a report by PM News.

It was gathered that the accident occurred around 5.30 a.m. on Saturday involving a blue Ford bus with registration number Imo ETU 409 XA; a red DAF model truck registered Lagos KRD 908 XN and an unregistered truck.


The vehicles collided at Olorunpodo J3 area in Ijebu-Ode on the Sagamu-Benin expressway.

Witnesses said eight passengers were also injured in the crash and have been taken to the Hope Hospital in J4 area in Ijebu-Ode, Ogun.

“The fatal crash, was caused by route violation which we all refer to as one way driving. “We have always warned drivers to desists from this reckless act which ultimately results in killing of innocent lives.

“The FRSC would sanction heavily any driver caught driving against traffic and we are calling on passengers to also complain against such drivers breaking this violation. “They can report such incidents at the nearest FRSC Command or call FRSC toll free number 122,” Oladele said.

The FRSC boss further revealed that coordinated efforts were ongoing by the officers of the FRSC and other traffic and rescue agencies to clear the debris from the crash.

The corpses have been deposited at the morgue at the State General Hospital in Ijebu-Ode.