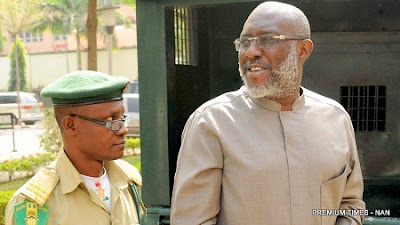 Olisa Metuh
Mr. Olisa Metuh, a former National Publicity Secretary of the Peoples Democratic Party, insisted before the Federal High Court in Abuja, on Tuesday, his further testimony in his ongoing trial would be dependent on what former President Goodluck Jonathan would tell the court in respect of the case.

According to Punch Metro, his lawyer, Mr. Emeka Etiaba (SAN), and the counsel representing his company –Destra Investments Limited – Mr. Tochukwu Onwugbufor (SAN), had earlier said this before the court on Monday.


But the trial judge, Justice Okon Abang, had, in a ruling on Monday, dismissed the submission as unknown to law. The judge maintained his position on Tuesday and ordered Metuh to continue his defence on Wednesday (today), while the court bailiff would make another attempt to serve Jonathan on December 11.

“Whether a party will call a witness or not cannot be predicated on the evidence of a witness yet to be called,” Justice Abang ruled again on Tuesday. But Etiaba said he would appeal against the judge’s decisions.

The Economic and Financial Crimes Commission had alleged in some of the seven counts preferred against Metuh and his company, Destra Investments Limited, that the ex-PDP spokesperson fraudulently received the sum of N400m from the Office of the National Security Adviser without any justification.

The EFCC also alleged that Metuh spent the funds on the party and for personal affairs. The accused person was also accused of transacting business with $2m cash said to be above the threshold of cash payments prescribed by the Money Laundering (Prohibition) Act.

But Metuh had insisted that both the then NSA, Sambo Dasuki, who released the sum of N400m and Jonathan, who allegedly authorised the payment, were required to testify in the case. While the summons served on Dasuki had been successfully executed, following which the ex-NSA had testified in the case, the court bailiff had yet to be able to serve Jonathan personally.

On Monday, while ordering the court bailiff to make another attempt to serve Jonathan with the witness summons, the judge insisted that the trial must continue with Metuh either testifying himself or calling on another witness other than the former President as his next witness.

The judge then fixed Tuesday for continuation of trial.

But at the resumed hearing on Tuesday, Metuh’s lawyer, Etiaba, insisted that Metuh still wanted Jonathan to first testify before deciding on whether or not he would personally testify in the case.

The lawyer added that Metuh could not also testify on Monday, because a document he sought to rely on was in the custody of one of his aides, Sam Nwosu, who was said to have travelled to Anambra State for the PDP congress.

“In the circumstance, we apply for an adjournment to enable the first defendant to present his defence guaranteed under Section 36(6)(b) and (d) of the Constitution.” Supporting Etiaba’s submissions, Onwugbufor said it was not for the court to choose for Metuh “which witness to call first, when to call the witness or if the defendant himself wants to give evidence.”

Ruling, Justice Abang said rather than compel Metuh to present another witness on Tuesday, he would adjourn in the interest of justice until Wednesday to enable Metuh to call another witness.