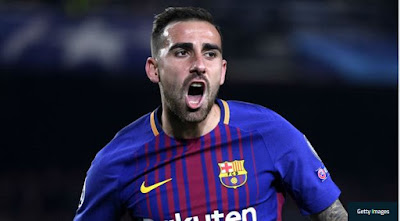 Jeremy Mathieu scored an own-goal on his return to Camp Nou as Barcelona laboured to a 2-0 win over Sporting CP with Lionel Messi a second-half substitute.

Coach Ernesto Valverde opted to rest his side’s star player and watched as the likes of Luis Suarez and Aleix Vidal misfired for almost an hour against Jorge Jesus’ well-drilled Sporting team.


Paco Alcacer scored the opener moments before Messi’s 61st-minute introduction, which prompted a marked improvement in Barcelona’s play as what was only a second win in five outings for Valverde’s men ended with the home side in control.

Sporting went into the game needing a famous victory and Olympiacos to deny Juventus maximum points, but neither materialised despite a respectable performance in which the Portuguese matched LaLiga’s leaders for long periods.

After an acrimonious Barcelona exit at the end of last season, Mathieu’s late own goal ensured the result ensured the result flattered his former club, who failed time and time again to make their final pass count until Messi came on.

Valverde will hope his side can continue to build momentum ahead of a Clasico with Real Madrid on December 23, while Sporting drop into the Europa League knockout stages.