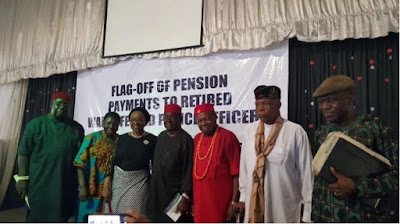 PTAD boss, Mrs Sharon Ikeazor in a group photograph with leaders of the pensioners
President of Association of Retired War Affected Police Officers (ARWAPO), Chief Matthew Udeh, has thanked President Muhammadu Buhari for his forthrightness and belief in one Nigeria after approving payment of pension entitlements for war-affected police officers from the Old Eastern Region.

The veterans were pardoned and retired from the Nigeria Police Force through a Presidential Amnesty granted on May 29, 2000 by the administration of the then President Olusegun Obasanjo.


He said: “We believe we are all one, one Nigeria forever. The war is over and over forever. “God will continue to bless President Muhammadu Buhari for looking at the nation as one indivisible entity. “I feel fulfilled today.

The whole ARWAPO members are full of gratitude to Mr President for hearing our cry for over 40 years and running,’’ Udeh, who was an Assistant Superintendent of Police before the war, said.

According to a report by Vanguard, the President, Association of Retired Police Officers of Nigeria, Mr Fidelis Oyakhilome, thanked the Pension Transitional Arrangement Directorate (PTAD) and the Federal Government for living up to their words and treating the officers fairly.

“I must commend ARWAPO members for their patience, endurance and perseverance all these years and as well thank Mr President, President Muhammadu Buhari, for making this possible,’’ Oyakhilome said.

A beneficiary, Mr Francis Ukaraoha, said that he was happy to have received his first pension alert some hours ago.

Ukaraoha, who was elated, showed the amount (figure withheld) of pension arrears paid to his account few hours ago to newsmen.

Highlights of the occasion were the tapping on computer to click-start the payment as well as a title-name award given to PTAD boss Sharon Ikeazor for assisting to make the payment possible after 47 years. 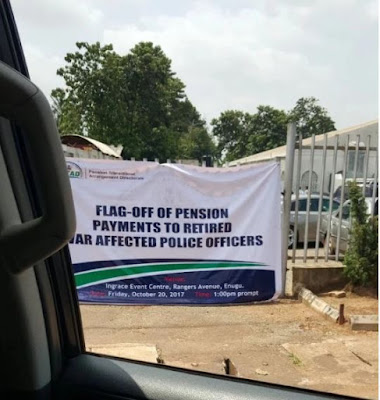 President Muhammadu Buhari had graciously given approval for the payment of pension entitlements to these officers and their Next of Kins who since May 29, 2000 have had Presidential pardon and verification but many of them remained unpaid for years.

At the launch of the Pension Payments to Retired War-Affected Police Officers in Enugu, the Executive Secretary of Pension Transitional Arrangement Directorate (PTAD), Mrs Sharon Ikeazor, said that the Federal Government through President Muhammadu Buhari-led administration would end all the painful legacies of the war.

Ikeazor said that Mr President tended to fulfill all Federal Government’s obligation to the South-East in line with available resources.

“This represents another decision by the current Federal Government to bring closure to the painful legacies of the civil war, and indeed a clear demonstrate that President Muhammadu Buhari is indeed a father to all Nigerians.

“His (Mr President) administration’s reforms under the PTAD will ensure that Nigerians who spent the productive years of their lives serving their nation will not experience difficulties in getting their pensions,’’ she said. 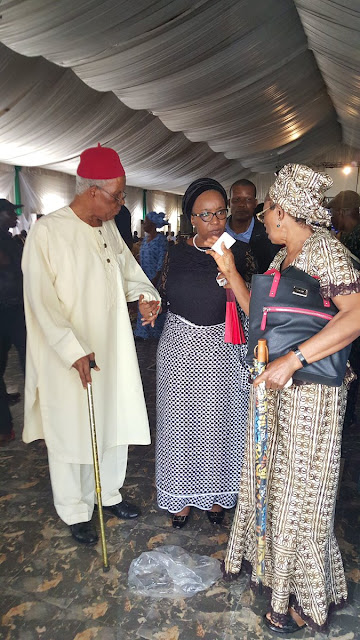 According to her, the day marks another milestone in re-integrating the hitherto neglected officers and men of the Nigeria Police Force who have suffered untold hardships over the years catering for their needs and that of their dependents.

“In this particular batch of payment, 162 officers who have never been on the payroll and 57 Next of Kin who have also not been paid their death benefits will be paid today. 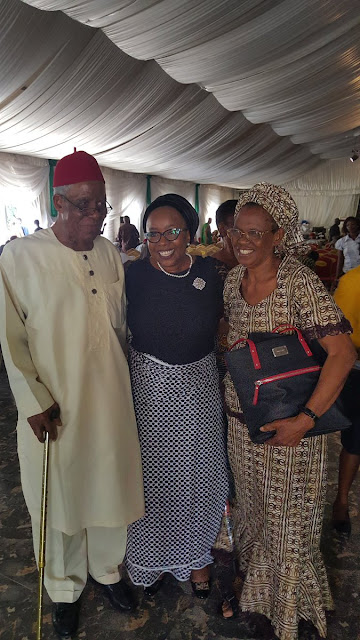 “The others, 155 who are on payroll but were being short paid would be paid in the next batch as soon as their pension benefit computation is concluded,’’ she said.