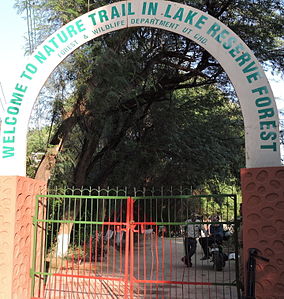 This report has come out in the Wildlife Institute of India (WWI) Dehradun. The Forest and Wildlife Department conducted this wildlife survey from May 5 to 9, 2021, with the help of technical support and experts from WWI. The WWI team has extensive experience in conducting extensive surveys in wildlife sanctuaries. While releasing the survey report, WWI has confirmed that the species of wild animals is increasing in Sukhna Wildlife Sanctuary. They further said that the best example of biological diversity had been seen in such a small area of Sukhana Wildlife Sanctuary. It is a good sign for nature and wildlife. The meeting of these two animals makes this wildlife sanctuary special.

The density of the Sukhna Wildlife Sanctuary is also similar to that of Rajaji Tiger Reserve National Park located in Dehradun. The highest quantity of sambar is found here, with an estimated population of 290-763. Other animals found inside Sukhna Sanctuary include leopard, jungle cat, golden jackal, Indian gray mongoose, chital, wild boar, nilgai, Hanuman langur, Indian pangolin, Indian Porcupine, and also various species of birds. In the WWI survey, 16 species have been found in the sanctuary. Apart from this, wild cattle and stray dogs have also been found.

Sukhna Wildlife Sanctuary is spread over 2600 hectares of Chandigarh, with large water bodies, grasslands, and lush green trees. In addition, many trees are of those species which keep growing on their own through the natural regeneration process. All these things make Sukhna Sanctuary special. WWI survey reports indicate Natural Habitat In Protected Areas of the sanctuary. This survey was done in May 2021. It is unique to find such a species of wild animals in such a small area.

This post first appeared on Mantra For Knowledge, please read the originial post: here
People also like
5 of the Best Cannon Beach Hiking Trails
Zoo Atlanta – The Best Place to See Giant Pandas and Other Animals
World Lightning Strikes Map
A Guide To Visiting Antigua, Guatemala: The Best 5 Things To Do And See