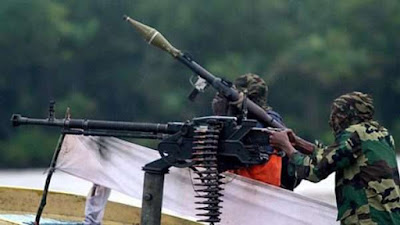 Norma-Egba appealed to the group to tow the path towards a peaceful resolution of all contentious issues.

The Chairman, Niger Delta Development Commission (NDDC), Sen. Victor Ndoma-Egba (SAN), has appealed to the Niger Delta Avengers (NDA) to reconsider its threat for renewed hostilities and bombings of oil installations in the region.

The chairman made appeal in a statement in Abuja on Monday signed by Mrs Clara Braide,Special Adviser Communication to the Chairman, NDDC.
Norma-Egba appealed to the group to tow the path towards a peaceful resolution of all contentious issues.

The Wonders of Pili Oil
MICRO BUSINESSES
Signs Of Carpenter Ants In Your Home
He urged the group to sheathe their swords and also advised that violence will lead nowhere but aggravate the situation.
He stressed that the damage done would be felt by the region that is already overstretched and earnestly needs rapid development.
The NDDC Chairman said that the Commission is doing all it can to intervene towards finding a lasting solution and appealed that dialogue be maintained with the Federal Government toward a path of peace and sustainable development.
He said: “Our environment is already polluted and is in dire need of restoration, destroying oil pipelines and installations would further destroy our environment and expose our people to sickness and untold hardship.
“It would worsen our already bad situation and expose innocent women, children and youths to grave danger.
“We appeal to NDA to still give the Government and Stakeholders more time. Resuming hostilities will be detrimental to all parties involved whether the NDA, the Region or the Government.
“At the end of the day it is the region that will be badly damaged and set backwards.
“NDDC is not resting on its oars in our efforts to finding a peaceful and permanent resolution of issues of development as the Commission has strategic intervention plans that should transform the region. To achieve this, however, peace is a must."
Ndoma-Egba, however, emphasised that President Muhammadu Buhari means well for the Niger Delta region and has already demonstrated this in various ways and would continue to address the issues.
“The region is the Goose that lays the Golden Egg; it is our collective patrimony and should not be destroyed.
“We would be doing a great disservice to ourselves and our future generations if we continue to destroy our own God given heritage in order to prove points that are already proven”.
“I passionately appeal to the conscience of our people to give the region a chance to heal. Give us a chance to rebuild and restore the glory of our region”, he said
NAN recalls that the militant group, which halted attacks on oil installations in the Niger Delta region last year following various appeals from the Niger Delta leaders, has renounced the ceasefire.
The group in a statement by its spokesperson, self-styled: “Maj.-Gen. Murdoch Agbinibo,”disowned the Pan Niger Delta Forum, PANDEF, who are intermediaries between it and the government.
The group is led by the former Federal Commissioner for Information, Chief Edwin Clark, who had also appealed to the group to maintain the existing peace.


This post first appeared on Talkgistinfo, please read the originial post: here
People also like
The Wonders of Pili Oil
MICRO BUSINESSES
Signs Of Carpenter Ants In Your Home